“NATO is a very unfriendly bloc to us. It is an enemy…Finland

and Sweden, all of a sudden, instead of neutral countries,

become part of the enemy, and they bear all the risks…

these territories would become a target…for a strike.”

The Republic of Finland (and the Kingdom of Sweden) officially confirmed its decision to apply for NATO membership on Sunday, May 15, 2022, primarily because of the recent and unprovoked, Russian invasion of Ukraine. Ironically, Russian President Vladimir Putin feels that the NATO alliance is encroaching upon the Russian Federation, with 755 miles of Russian land bordering five neighboring, NATO nations, and he used that as an excuse to invade neutral Ukraine, which is not a NATO member. But officially-nonaligned Finland currently shares an 832-mile border with Russia, and if they are rapidly accepted into NATO, which seems highly likely, it would more than double the NATO territory directly adjoining Russia. The New York Times aptly called it Putin’s “Nordic Nightmare.”

Finnish Prime Minister Sanna Marin recently stated that, “The situation is, of course, very severe…Our decision is historic,” with public support within Finland for NATO membership jumping to 76 percent by May 6, 2022, which is essentially triple the polling numbers from just a few years ago. Former Finnish Prime Minister Alexander Stubb told CNN that, “The greatest, realistic threat to our national security is Russia. Over time, the reality that Russia is willing to create greater chaos in our region has become even clearer, so joining NATO becomes the pragmatic option.”

Lauren Speranza, the director of Transatlantic Defense and Security at the Center for European Policy Analysis, told The Washington Post that, “Not only does Putin have a huge failure on his hands in terms of his military objectives in Ukraine, but he’s also enlarged NATO, which was the exact opposite of what he wanted. It underscores what a huge, strategic miscalculation this was.”

The Finnish Defense Forces consist of only 23,000 active-duty personnel, with 900,000 reservists as a backup contingent, of whom 280,000 are part of the wartime reserve, ready to be called up in an instant. Yet Finland willingly spends 2.15 percent of its GDP on defense, which is a higher percentage than that of Albania, Belgium, Bulgaria, Canada, Czech Republic, Denmark, France, Germany, Hungary, Italy, Lithuania, Montenegro, Netherlands, Norway, Poland, Portugal, Romania, Slovakia, Slovenia, Spain, or Turkey, all within NATO, and nearly as much as the United Kingdom spends.

Then, there was the deeply profound and demoralizing effect of sniper tactics. The most-successful sniper in history was Simo Häyhä, nicknamed the “White Death,” a Finnish soldier in the bitterly-cold, Winter War, credited with 505 confirmed, sniper kills against Soviet soldiers, 37 more unconfirmed kills, and over 200 additional kills as an ordinary infantryman with a Suomi K31 submachine gun, all in the brief period of only 90 days, in the very short daylight of the Finnish winter. For his extraordinary accomplishments under fire, Simo was promoted from corporal to second lieutenant, earning a battlefield commission, and was twice awarded the Cross of Liberty (Finland’s highest award for valor), the Medal of Liberty (second-highest award) twice, and the Cross of the Kollaa Battle.

The war ended with a Soviet victory after 105 days of brutal conflict, and the Moscow Peace Treaty was signed on March 12, 1940, with Finland forced to cede much of present-day Karelia (11-percent of their territory) over to the Russians. Officially, Finnish war casualties totaled 70,000 killed, wounded, or missing, and similar, Soviet losses amounted to 323,000. Unofficially, Soviet leader Nikita Khrushchev later concluded that the true Russian casualty figure was closer to one million men killed, wounded, or missing.

Khrushchev remarked candidly that, “A victory at such a cost was actually a moral defeat…Our people never knew that…because they were never told the truth…All of us, and Stalin first and foremost, sensed in our victory a defeat by the Finns. It was a dangerous defeat.” Stalin himself offered a rare toast in Moscow on April 6, 1948, proving that Russia only understands brute, military force: “Nobody respects a country with a poor army, but everybody respects a country with a good army. I raise my toast to the Finnish Army!”

As writer Arto Bendiken concluded in his 2010 article, “Thus with a thousand lakes of warm, red blood on cold, white snow did the Finns purchase their escape from assimilation into the Soviet Union, ensuring that when the Iron Curtain was drawn, it ran along the eastern side of Finland rather than the western one.”

The hardy, Finnish people have never, ever forgotten that unprovoked, Soviet invasion of their homeland, and the recent, Russian invasion of Ukraine has served as a huge wake-up call, as warned by Sir Winston Churchill in 1948, that, “Those who fail to learn from history are doomed to repeat it.”

Based in Kouvola, Finland, only 43 miles west of the Russian border, and 40 miles north of the Gulf of Finland, is the Utti Jaeger (“Hunter”) Regiment, the nation’s premier, special operations force (SOF), manned by 400 active-duty soldiers and 220 conscripts, and currently responsible for all SOF activities within the nation. It consists of four units: the Special Jaeger Company, the Paratrooper Company, the Helicopter Battalion, and the Support Company. The Naval Special Operations Detachment, formerly under the Navy’s Coastal Brigade, has recently been transferred to the Utti Jaeger Regiment, although it continues to operate from Kirkkonummi, eight miles west of Helsinki, the capital city.

The Special Jaeger Company is the primary, professional, special operations force of the nation, trained for the most-demanding, special operations, with a year-long, Special Forces Qualification Course (SFQC.) Most applicants have previous experience for approximately seven years as a paratrooper or combat diver, with an average of 100 candidates applying each year, of which only about 12 will graduate. They are all specially trained in military intelligence, military freefall parachuting, sniper skills, communications, engineering, advanced vehicle operations, medical care, and some become forward air controllers. Their average age is 28 to 29, and they can each bench-press 240 pounds.

Combat-proven, Finnish defense strategy takes advantage of their heavily-forested terrain and numerous lakes to wear down an aggressor, instead of attempting hazardous, frontal attacks at the Russian border.

Finnish military personnel have served mainly in peacekeeping operations, which were dangerous enough that 39 Finnish soldiers have lost their lives. They have participated in various actions in Afghanistan (especially the Jaegers), Bosnia-Hercegovina, India, Iraq, Kosovo, Lebanon, Mali, the Mediterranean Sea, Pakistan, and Somalia.

There are also the Finnish Coastal Jaegers from Dragsvik, along the southern coastline, near Ekenäs, but they are primarily an elite, rapid-reaction, naval infantry, assault force, for conducting reconnaissance and counterattacks within the Finnish archipelago, and are not considered to be a true, special operations unit. They wear a dark-green beret with a golden, sea eagle’s head pin, standard, M05 Landscape-pattern, woodland-camouflaged uniforms, and use standard-issue weapons.

Here are the current weapons of the Finnish Special Forces:

Assault Rifles: The new, standard, service rifle of the Jaeger Regiment is the FN SCAR-L (5.56 RK SCAR, with 14-inch barrel) and SCAR-L CQC (with 10-inch barrel) in 5.56x45mm NATO, with PEQ-2A laser-aiming units, slowly replacing the widely-used, Finnish-produced, Sako RK 95 TP assault rifle in 7.62x39mm since February 2015, which is still in limited service, occasionally seen equipped with a 75-round, drum magazine from an RPK machine gun. Some of the SCAR-Ls are fitted with FN40GL-L 40mm grenade launchers.

Submachine guns (SMGs): The standard SMG is the H&K MP5A5, or MP5SD6 suppressed version, both in 9mm. 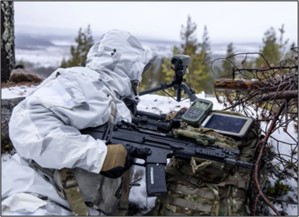 Finland’s acceptance into the NATO alliance is almost guaranteed, especially since it is a very modern, European country that already meets most entry criteria, and already spends a greater share of its GDP for military defense than 21 of the 30 existing, NATO nations. The paranoid Russian Federation had already belligerently vowed to deploy hypersonic and nuclear weapons close to the Finnish border. Why? How is peaceful, nonaligned Finland an existential threat to the enormous, Russian homeland?

Should Russia unwisely choose to attack Finland in the interim, before it officially becomes a full-fledged, NATO member, both Finland and Sweden have made recent, security agreements with the United Kingdom, the United States, and Germany, to come to their aid in the event of an attack or other national security crisis. This includes intelligence-sharing agreements, and accelerated, joint training and exercises.

The Russian Federation’s blatant, anti-NATO stance and violent aggression in Ukraine have backfired on President Vladimir Putin enormously, driving more neutral or nonaligned nations such as Finland and Sweden into the arms of the NATO alliance for the sake of collective security, and will soon more than double the size of the NATO nations bordering Russia.

Record numbers of Finnish civilians are now taking accelerated, military reservist training, with the National Defense Training Association there experiencing an eight-fold increase in the number of military course enrollees, according to USA Today, with classes now being filled to capacity. They are preparing for the worst-case scenario with willingness and bold determination. As two Finnish reservists recently noted, “It’s not looking good for Europe at the moment. For Finns, it’s more probable to go to war…All Finns know it’s very possible that at some point they (the Russians) could come here, also.”

Any attempted, Russian intervention into neighboring Finland will surely be met with all of the courage, skill, resources, determination, and fierce resolve of the elite, Utti Jaeger Regiment, already so close to the border, which will exact a staggering price from the Russian invaders, so Putin should weigh the military consequences very carefully, indeed, before making another monumental mistake.