the Ukrainians defend their country. We do not provide

intelligence with the intent to kill Russian generals.”

On Monday, March 7, 2022, Major General Vitaly P. Gerasimov, age 44, the first deputy commander (and chief of staff) of the Russian 41st Combined Arms Army from Novosibirsk, was apparently killed in action near Kharkiv, Ukraine. He was one of at least 12 to 15 Russian generals to die in battle during the Russian invasion of Ukraine. He was reportedly the nephew of Russian Army Chief of Staff General Valery Gerasimov. While his death has not yet been officially confirmed by Russian sources, these generals have been targeted by artillery strikes, snipers, anti-tank weapons, and other methods, often with the assistance of intelligence information from U.S. military and civilian sources.

Using Gerasimov as a hypothetical example (since the circumstances of his death have never been revealed), here’s one possible scenario based on some of the very latest American military technology available to Ukrainian forces. 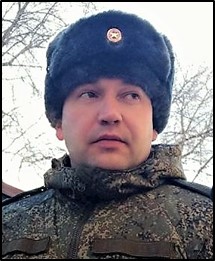 Let’s speculate that the young general is rolling southbound on Route M20/E105, the major roadway between the village of Nekhoteevka at the Russian border and the city of Kharkiv, Ukraine, his target area. Further, let’s assume he is using non-secure field radios on his woodland-camouflaged Tigr-M (“Tiger”-M) lightly-armored 4×4 command vehicle (similar to an American Humvee), having recently seized the Ukrainian SA-10D Grumble surface-to-air missile battery (clearly visible on Google Earth satellite imagery, less than 12 miles from the Russian border) between Rus’ka Lozova and Lisne. Then, he is temporarily halted near the Azs Avias Plus gas station just north of the M20/E40 highway cloverleaf on the Kharkiv Highway, about four-and-a-half miles north of the city.

Russian tactical doctrine, as demonstrated thus far during the invasion, is to use their tanks and armored personnel carriers only on paved roads, so as to avoid becoming bogged down in loose, wet soil as the winter snow melts. They appear to have a remarkable lack of secure-radio technology, usually transmitting military orders in the clear on channels that virtually anyone can receive including U.S. and Ukrainian intelligence operatives. In addition, the U.S. National Security Agency (NSA) can easily and precisely geolocate the cell phones of almost anyone – especially enemy leaders and terrorists – to within 30 feet anywhere on the planet using special, top secret tracking programs such as Geo Cell and “The Find,” even when the phones are turned off. It’s scary stuff!

Meanwhile, in downtown Kharkiv, the senior intelligence officer for the Ukrainian 92nd Mechanized Brigade receives an urgent, classified report from U.S. sources that General Gerasimov has been pinpointed just south of the gas station in Lisne, next to the Feldman Ecopark event venue area. However, the current Ukrainian front lines are at the edge of the Kyivskyi District, just over four miles farther south, not far from the local airport. He advises his brigade commander, a colonel, of this fleeting, high-value Russian target, and the colonel summons a special army drone team from the airport.

These two Ukrainian soldiers quickly deploy just one mile to the front lines with a pair of combat-proven AeroVironment (of Arlington, Virginia) Switchblade 300 “tactical missile systems” – essentially short-range, lightweight, expendable drones with an effective range of more than six miles. The Switchblade 300 is a modern marvel – less than 20 inches long, only three inches in diameter, and weighing a very modest six pounds including the carrying case and launcher. The launch tube is set on the ground, like a small mortar, with a compressed-air bottle attached to quietly blast the drone out of the tube.

The Switchblade looks like a capital letter “H,” flying sideways, with the sides of the “H” as tandem, fore-and-aft wings. Its name comes from its folded-wing configuration inside the launch tube. When fired, the wings quickly pop out horizontally, with twin, vertical tails for lateral stability. It’s powered by a tiny propeller-driven electric motor, and it has a non-metallic composite body, making it totally silent and extremely difficult to detect or intercept visually or on radar. It cruises at 63 miles per hour with a final dash speed of 100 miles per hour. It employs full-color daylight and infrared cameras, pre-programming, GPS navigation to its targets, and an “aided target tracker” that solidly locks onto either stationary or moving targets.

It’s a “kamikaze” or “suicide drone” with an onboard Northrop Grumman advanced specialty warhead (about a half-pound of shaped explosives). It fires forward like a focused shotgun blast to precisely strike its assigned target with destructive force equal to a 40x46mm grenade, and it can be pre-set to detonate at a specific height such as 15 feet above the target. Alternatively, the warhead can be detonated in flight to harmlessly destroy the drone in mid-air when required.

This deadly loitering munition flies noiselessly at an altitude of 500 feet en route to its target either autonomously or under manual control. It uses the same Ground Control Station (GCS) as other AeroVironment drones such as the Wasp, RQ-11 Raven, and RQ-20 Puma, utilizing a fly-by-radio-frequency signal. It can fly and loiter for up to 15 minutes, and out to approximately 6.2 miles before striking its target.

Originally designed for the U.S. Special Operations Command (USSOCOM) and in service since 2011 with the U.S. Army, U.S. Marine Corps and the British armed forces, the Switchblade 300 has seen extensive combat use in Afghanistan with more than 4,000 units deployed and 350 more used by USSOCOM against ISIS terrorists in Iraq and Syria from mid-2017 onward. The Ukrainian military received 100 Switchblade 300 systems from the United States in March 2022 for a total of 1,000 actual missiles/drones. The Lithuanian (NATO member) armed forces just announced their intention to order Switchblade 300s in April 2022.

The real-time video data captured by the drone’s cameras is downlinked to the GCS unit for processing, where the operators can capture screen images and store data to assess and track the targets. The ground station also allows retransmission of video and other data to an operations network in real time.

“What’s our target, sir?,” the drone operators ask the Ukrainian infantry officer at the front lines.

“There’s a Russian general temporarily stopped beside the highway at coordinates 500621 north by 361611 east, about six and a half kilometers to the north. He’s in an armored convoy,” the officer responds.

“Do we know what he looks like?,” the young drone operator inquires.

“Here’s a recent photo of him.” The officer shows a facial image sent to his cell phone by the brigade intelligence officer.

It only takes the team two minutes to set up the launcher, program the missile, and launch it toward the north where it parallels the Kharkiv Highway above the heavily-wooded, snow-covered, Lisopark area. That area is held by small, well-concealed teams of Ukrainian SpetsNaz commandos with anti-tank weapons and is just north of the embattled city. The Switchblade quickly approaches the highway cloverleaf near Lisne, and its camera locks onto a column of 20 Russian BMP-2M Berezhok armored personnel carriers (APCs) containing a total of 140 armed infantry troops along with a single four-wheel-drive Tigr-M vehicle that is momentarily halted along the roadway to the north.

Closely monitoring the GCS control unit, one operator remarks, “There’s the APC column, at the proper coordinates. That’s a Tigr command vehicle at the southern end, with two antennas.”

Beside the ecopark at Lisne, Vitaly Gerasimov is standing upright in his camouflaged Tigr-M and still issuing verbal orders to the Russian troops on both flanks as they besiege the city of Kharkiv. He never sees or hears the Switchblade 300 as it crosses over the nearby cloverleaf beneath the low cloud cover and begins its dive-bombing run.

Zooming-in on the Tigr-M with his drone’s daylight camera, the Switchblade operator magnifies the face of the man standing up to his waist inside the turret opening of the vehicle’s roof with a pair of Baigish 10×50 military binoculars and a radio microphone. He is temporarily exposed to the freezing, 30-degree temperature under a fully-overcast sky so that he can observe the clamorous battle taking place all around him.

“That’s our guy!,” the Ukrainian operator confirms, glancing at the officer’s cell phone image one more time to confirm the familiar, facial features of his target.

With unerring precision, the drone locks onto Gerasimov’s face, whooshing silently toward him in a 100-mile-per-hour dive. He suddenly looks up at the last possible second, stunned beyond words and with no time to react. The lethality-enhanced, shotgun-blast warhead detonates in close proximity to the Tigr-M, killing him instantly.

Is this the way that Major General Vitaly Gerasimov met his untimely fate? We’ll never know for certain, but one report stated that he “has been eliminated by Ukraine’s military intelligence operators,” clearly indicating a classified event directed by the Ukrainian Defense Intelligence Agency and led by Major General Kyrylo Budanov. So, that much appears to be true.

The Switchblade 300 technology certainly exists in huge quantities in Ukraine, and targeting enemy leadership is a viable and legitimate wartime tactic for any army. The $6,000 Switchblade 300 is not only capable of targeting individual, hostile soldiers or terrorists, but it’s also quite effective against other fixed or mobile targets of opportunity such as light vehicles, improvised explosive devices, artillery positions, or any of a huge variety of  enemy targets.

Ukraine is also receiving a similar kamikaze drone, the mysterious and still-classified Aevex Aerospace (of Solana Beach, California) Phoenix Ghost, which is believed to be very similar to the Switchblade 300. One hundred and twenty-one Phoenix Ghosts, an odd number to be sure, have been sent to Ukraine so far.

The innovative Switchblade 300 is an amazing, man-portable, lightweight, hunter-killer drone that clearly demonstrates the advanced technologies of 21st-century warfare. It is already combat-proven in Afghanistan, Iraq, and Syria, and it is now making quite a name for itself in the Russia-Ukraine War, much to the eternal dismay of the targeted Russian forces.