The Rolex of Handguns

The term “cult following” is used to describe many groups in life. In the shooting world, it often describes a group who appreciates a specific caliber or weapon. One of the better-known weapons with such a following is the Heckler and Koch P7 series of handguns. Designed in the early 70s by Helmut Weidle, it was revealed in 1976 as the Police Self-Loading Pistol. Going into production in 1979 to fulfill West German police contracts, the weapon had to be rendered completely safe if dropped by an officer. To meet this requirement, the P7 was designed with a unique squeeze cocking mechanism that prevented negligent discharges.

The P7 earned a reputation for safety and reliability with W. German police agencies. With success in Europe, Heckler and Koch began to import the P7 to the US, with some design changes, hoping to break into the highly competitive police market. Due to cost, the P7 did not see wide-spread adoption with US law enforcement agencies. During that time, the P7 family was the most expensive production handgun in the world. Heckler and Koch ran an advertising campaign to explain why the P7 was so expensive.

With the advent of the “Wonder Nines” in the 1980s, sales of the P7 began to decline. To compete, Heckler and Koch released the M13 variant with a 13+1 capacity. With less costly options available, the P7 series became more of a connoisseur gun, and production ended in 2008. Today the P7 series is sought after by collectors and shooters alike, commanding a premium on the used market due to its high quality and craftmanship. With many shooters referring to it as “The Rolex of handguns.”

This article focuses on the original P7 PSP. The sample was a former, Lower Saxony Police issue, made in October1985. Stamped on the slide of each Polizei issued P7 is the month and year it was made. Heckler and Koch imported them in the late-2000s when many German Police agencies were switching to the HK P30. Before importation, all weapons were thoroughly checked, and parts were replaced as needed. Some were refinished by distributors others were not.

Design features of the P7 PSP.

The HK P7 is an all-steel, striker fired weapon that uses a unique gas-delayed blowback system. The system uses gas pressure from the fired cartridge to retard the rearward motion of the slide. This is accomplished by means of a piston inside a cylinder located under the barrel. The piston opposes the rearward motion of the slide until gas pressure has decreased allowing the empty case to eject. The P7 uses a fixed 4.1” CHF (cold hammer forged) barrel with polygonal rifling and low bore axis. The chamber has 18 flutes to facilitate extraction. The eight-round magazine is constructed of steel and sits almost 90 degrees to the chamber, ensuring reliable feeding of rounds. The PSP magazine release is located on the butt of the weapon and is of the friction type.

The grip of the pistol contains the cocking lever. Before the P7 can be fired, the grip must be squeezed; thus, it acts as the safety. It takes around 16lbs to engage the lever and cock the striker. Only 2lbs is required to keep it cocked. When fully cocked, the end of the striker protrudes from the back of the slide and there is an audible click. Then the weapon fires by squeezing the trigger. If the lever is held in, the P7 operates like any other semi-auto handgun. If the lever is released, the weapon is de-cocked and rendered completely safe. The manual of arms is easy to learn, and with practice, allows fast deployment and a large margin of safety for concealed carry. You must make a conscious decision to fire this weapon. In my opinion, it is nearly impossible to have a negligent discharge with this weapon. By design, the P7 is completely drop-safe.

The P7 is a simple weapon to filed strip and clean. First, ensure the weapon is clear by removing the magazine and checking the chamber. With the weapon in battery, push in the disassembly button, pull the slide to rear and up, then forward off the frame. Cleaning is straight forward with some differences. The piston just needs a wipe with a rag; it does not require lube or heavy scrubbing. To clean the gas cylinder, use the provided tool. If the weapon does not have tools, you need to buy them. It is not advised to use a screwdriver to scrape the cylinder. If the cylinder is damaged, you will have a very expensive paperweight. You and/or the gun will need a trip to Oberndorf, Germany where, hopefully, it can be repaired. So please, buy the tools. In the chamber, there is a small hole, allowing gas to enter and extract the case; use a paperclip to keep it clear. To clean the striker, reassemble the weapon, cock the weapon so the striker is even with the back of the slide, then remove striker assembly with the provided tool. This only applies to the PSP; later models eliminated the need for a tool to remove the striker assembly. 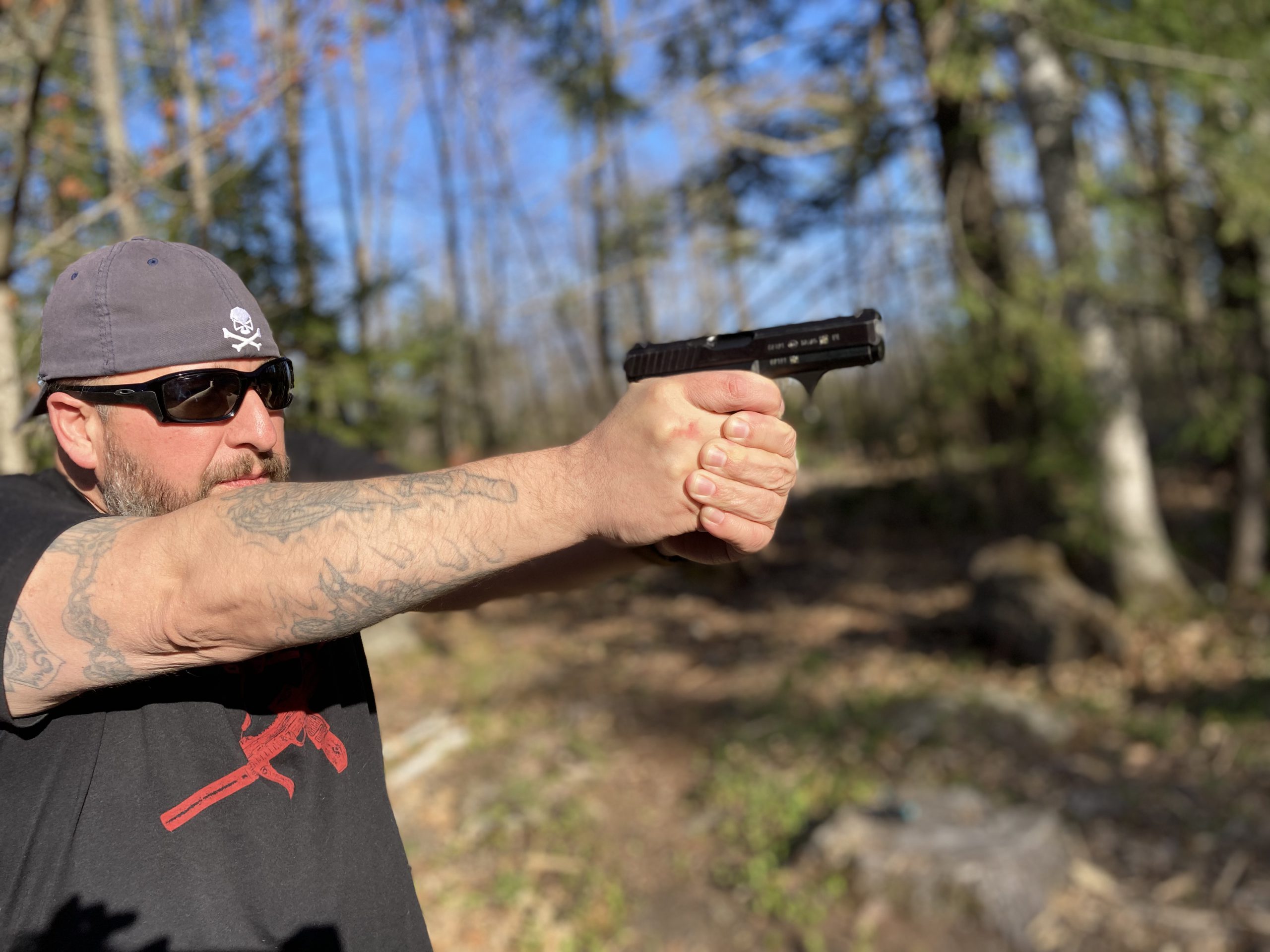 The P7 is a pleasure to shoot and is extremely accurate. Contributing factors are the excellent trigger and ergonomics of this weapon. While designing the P7, Helmut Weidle studied the human hand to create the optimal grip angle of 110 degrees. This angle provides a comfortable grip and natural point of aim, similar to pointing your finger at the target. The trigger on the P7 is the best striker trigger I have ever used. A true single action with a smooth take up and a clean break with no grit or creep. Reset is short, allowing for fast follow up shots. Weight of the trigger on test weapons came in at 4lbs. The sights are steel, three dot type that are easy to pick up.

The P7 is flat shooting with little felt recoil due to the operating system. The one drawback is that after a few mags, it does get hot. Keep in mind, the P7 was designed as a duty weapon for Police to be fired then re-holstered. Without gloves, I could fire 4 mags before it got uncomfortable. In later versions, HK added a heatshield. I liked the simple manual of arms while shooting drills: Draw, squeeze, fire.

Shooting Mozambique drills was fast and efficient due to the trigger and low recoil. Shooting the El-Pres, the low bore axis and natural aiming made transitioning targets easy and accurate. One drawback was a slow mag change with the heel release. The cocking handle also doubles as the slide release, which helps save time when reloading. If you practice the fundamentals, you shouldn’t have any accuracy issues with this weapon.  Reliability was 100% with 500 rounds of mixed ammo. There is a video online that HK produced. They removed the extractor from a P7, and the weapon functioned without it due to the fluted chamber. 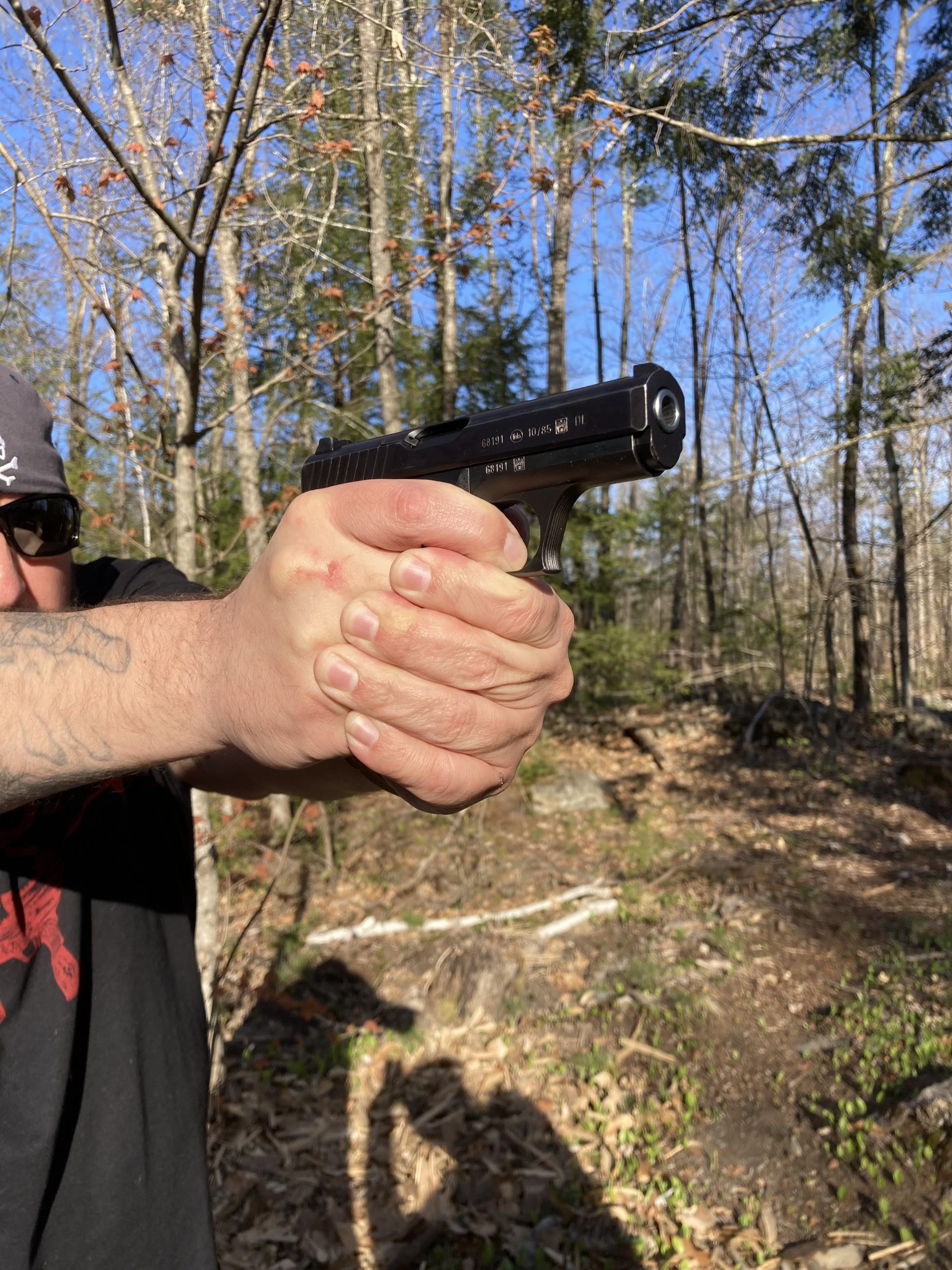 Pros and Cons of the P7 PSP.

I wanted to include this to help readers decide if the P7 is right for their needs.

Here are some things to look for if you find one for sale. I base these on my own experience when purchasing one many years ago.

Buying tips (This applies to the P7 family.)

Do your research and look for the model you want. Ask to take the grips off and check the internals. Look for any unusual or heavy wear. When the German Police trade-ins were imported. Distributers used a grading system, which was more for cosmetic reasons than anything else. I have seen a grade C that had better internals than a grade A. Keep that in mind if you are looking for a shooter. The internals are key to this weapon functioning properly. Try the action; it should be smooth without a gritty feel same with the trigger. Ask to field strip it and check the piston and cylinder for wear or damage. With the prices asked for them, a seller shouldn’t have an issue with letting a prospective buyer do the above. If they do, my advice is to walk away.

The HK P7 comes from an innovative time in firearms history. The craftsmanship and intricacy of the cocking mechanism show that much thought was put into engineering this fine weapon. The reliability, accuracy, and safety make the P7 an excellent choice for concealed carry even today, 43 years after it first went into production. Yes, I have no qualms recommending this weapon to family or friends. I trust my life every day to the HK P7 PSP: Enough said.

Our 2A rights are under constant assault by corrupt America hating politicians. Please join or support a gun rights group that best represents your interest.