“The planet is burning and spinning.

Over our Motherland now smoking.

And that means we need one victory.

One for all – we will not stand for the price.”

The Russian Airborne Forces (Vozdushno-Desantnye Voyska Rossii, or VDV) are the huge nation’s substantial paratrooper command formed on May 7, 1992, and boasting at least 45,000 soldiers in four divisions and four separate brigades. They serve as light infantry, airborne infantry, or airmobile infantry, and they wear sky blue berets and blue-and-white-striped telniashka undershirts, usually visible at the neck of the uniform. So, they are nicknamed the “Blue Berets.” Russian elite SpetsNaz commandos also typically wear the blue beret to blend in with ordinary airborne troops.

But the advance elements of any military formation are their forward-deployed scouts, or reconnaissance teams, tasked with traveling very fast and light in order to stay ahead of the main columns and report vital intelligence information about enemy troop dispositions and possible targets back to the unit’s leaders in combat. These are a special breed of men – part spy, part messenger, and part commando, normally trained not to fight, unless absolutely necessary because combat action would betray their concealed positions. In the Russian Army, these special reconnaissance units wear a distinctive dark-green beret or a camouflaged beret if worn into actual battle.

The Russian VDV is organized under a Commander’s Directorate in Moscow, with the 45th Guards SpetsNaz Brigade, an elite reconnaissance and special operations force, considered to be their very best paratrooper unit, based at Kubinka near Moscow. The 45th SpetsNaz Brigade has its own reconnaissance detachment of “Green Berets.”

Next are the Combat Forces, consisting of the 7th Guards Mountain Air Assault Division at Novorossiysk along the Black Sea coastline, with:

Virtually all of these paratrooper units took part in the February 2022 Russian invasion of Ukraine to one degree or another. The 45th Brigade (under Colonel Vadim Pankov) swept in just northwest of Kyiv and later into the Donbass region; the 11th Brigade near Chernihiv, farther east; the 76th and 106th Divisions just above the Donbass region; and the 7th and 98th Divisions toward Mariupol, in the south. 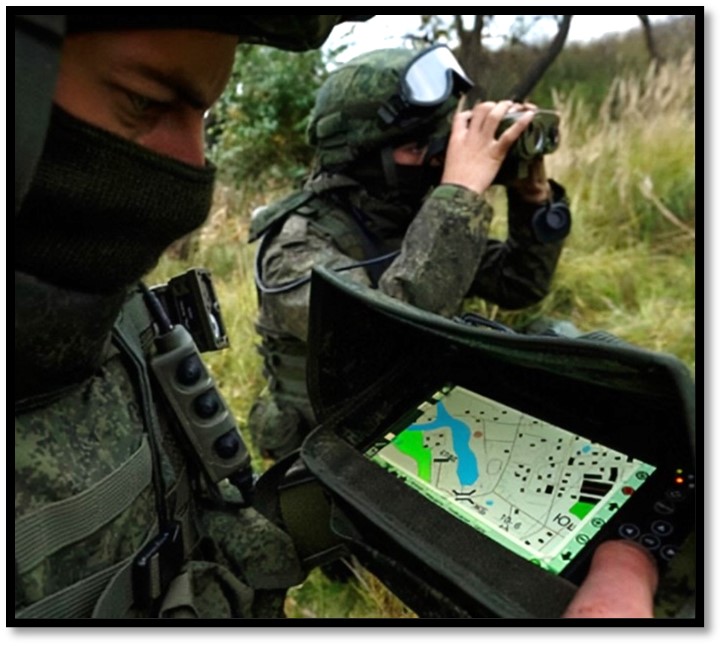 Recon scout uniforms include the older, 1998 Flora pattern, similar to U.S. Army M81 woodland BDUs; a digitized, woodland pattern called Skol; the now-standard 2008 Tetris/Digital Flora/EMR pattern (as seen in the photo above) of the Russian Army Survival Pattern (SURPAT); the  2010 Spekter-S digital pattern; an Ataka (“Attack,” or A-TACS) pattern; and more recently, a Russian-made copy of the popular MultiCam camouflage design with at least two different, desert-camouflage versions available for deployments to Syria. They wear the dark green beret in garrison and either a helmet or camouflaged beret in the field. 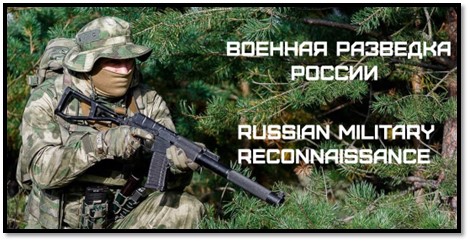 Their new, standard parachute is the round, upgraded D-10 or D-12 (D-14 in the future) static-line chute with white canopy and Z-5 belly reserve chute; and the Arbalet-2 (“Crossbow-2”) freefall ram-air parachute in light gray for special missions. Thousands of each model were delivered in 2019. Brand-new, next-generation Stayer (light-gray) freefall chutes were delivered beginning in 2021, offering increased control and maneuverability.

Russian VDV airborne troops use a variety of military vehicles including the BMD-2, BMD-3, and BMD-4M (the new standard) armored personnel carriers and even 160 T-72B3 tanks. However, their reconnaissance detachments are more likely to employ lighter, faster, four-wheel-drive vehicles such as the GAZ SPM-2 Tigr (“Tiger”), Iveco LMV-M65 Rys (“Lynx”), UAZ-3163 Patriot jeeps, AM-1 all-terrain vehicles (ATVs, often armed), and especially the brand new (since 2021) Sarmat-2 . The Sarmat-2 (named for the Sarmatians, an ancient people from Ukraine and southern Russia) is a heliborne, light tactical buggy (LSTS-1943), capable of mounting a Kord 6P50-2 heavy machine gun in 12.7x108mm.

And, in August 2020, the VDV began receiving the new KamAZ-4386 Typhoon vehicle. It is much like an American Humvee but with a remote weapon station on top, mounting the same Shipunov 2A42 30x165mm, high-velocity autocannon used in the BMD-2 and BMP-2 armored vehicles, the BMPT-72 “Terminator-2” vehicle, and the Ka-52 Alligator helicopter gunship for mobile fire support. 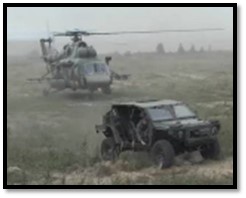 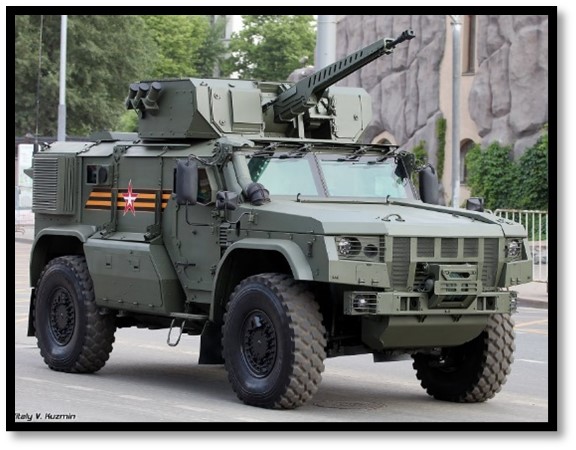 The current war in Ukraine has not progressed especially well for Russian Airborne Forces. On February 24, 2022, the very first day of battle, elite VDV paratroopers from the 45th Guards SpetsNaz Brigade and the 11th and 31st Brigades attempted to seize Antonov Airport in Hostomel, just northwest of Kyiv, by flying in Mi-8 and Mi-17 Hip-H assault helicopters (about 30 in the first wave) full of paratroopers at 8:00 AM, escorted by several heavily-armed Ka-52 Alligator gunships.

But the American CIA had obtained detailed information on Russian war plans in advance, and CIA Director William Burns personally traveled to Ukraine in January 2022 to alert the Ukrainian government and give them time to prepare for the impending invasion. Antonov Airport was their very first target. They hoped to capture it and use it for flying in Russian reinforcements and supplies, initially aboard 18 Il-76MD Candid-B strategic jet airlifters.  But, the Ukrainian 3rd SpetsNaz (commando) Regiment and 4th Rapid Reaction Brigade of the National Guard were waiting for them, as well as some armed and very angry Ukrainian civilians.

The Russian paratrooper assault at Hostomel had a fatal flaw, because even though the three attacking brigades possessed reconnaissance detachments, they failed to use them and parachute them in quietly the night before the invasion to assess Ukrainian defending troops. Instead, the Russians adopted a thuggish, Soviet-style, frontal assault in broad daylight, making numerous strategic and tactical errors in the process. As the Los Angeles Times pointed out on June 4, 2022, “This is the traditional, Soviet and Russian approach: You concentrate a lot of firepower in a small place, and you keep going until you destroy your opponent…It’s not new-age warfare.”

Several Mi-8 and Mi-17 helicopters were shot down, along with their paratrooper passengers, by Ukrainian missiles enroute to the airport. More were lost or damaged by artillery fire after landing. At least one Ka-52 Alligator gunship was hit by a missile and made a forced landing. Ukrainian Mi-24P Hind-F helicopter gunships arrived, pummeling the Russians on the ground with 80mm rockets, and overall, Ukrainian resistance, reinforced by the Georgian Legion (wearing black berets) of volunteers from Kyiv was much greater than anticipated. This was due to a lack of pre-attack reconnaissance information, and the Il-76MD airlifters could not land and had to turn back into Russia. 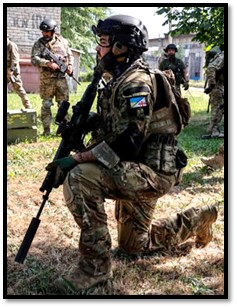 “The troops were f***ing shocked, people turned gray, especially considering we took fire in the air,” said Nikita Ponomarev, a paratrooper later captured by the Ukrainians, according to The Moscow Times. “There was nothing left, not even a turret. Almost nobody (60+ Russian paratroopers killed in action) survived that day.”

The airport battle raged on, well into the next day, with the Russians sending 200 more helicopters, briefly seizing the airfield and pushing back the defenders. However, it was only a temporary victory, and they failed to establish the desired “air bridge” resupply route for their invasion toward Kyiv. On March 2, 2022, Major General Andrey Sukhovetsky of the VDV’s 7th Guards Mountain Air Assault Division, who was the appointed deputy commander of the 41st Combined Arms Army, was killed at Antonov Airport by Ukrainian sniper fire. This was apparently based upon intelligence information provided by the U.S. government; he was the first Russian general to die in battle in this invasion.

On February 26, Russian Airborne Forces attempted to assault Vasylkiv Air Base, 13 miles south of Kyiv and the home of a Ukrainian MiG-29 Fulcrum-C jet fighter unit as well as the mythical “Ghost of Kyiv” fighter pilot. But once again, heavy fighting broke out. A Ukrainian Su-27P Flanker-B fighter shot down a Russian Il-76 jet transport loaded with 126 paratroopers, and then a second Il-76 was shot down less than two hours later with staggering losses, Both were attributed to U.S. intelligence information passed to the Ukrainian Air Force. It was yet another disaster for the VDV. By the end of March, the Russians had withdrawn completely and vacated Antonov Airport, completely giving up on their offensive toward Kyiv.

At about this same time, on March 17, 2022, the 331st Guards Airborne Regiment, including its commander, Colonel Sergey V. Sukharev (posthumously awarded the prestigious, Hero of the Russian Federation medal), was all but wiped out in the suburbs of Kyiv by Ukrainian forces, with only one severely wounded survivor.

According to Brendan Cole of Newsweek on May 26, 2022, “Mistakes made by Russia’s airborne forces, the VDV, in the invasion of Ukraine show how Vladimir Putin’s investment in his military has resulted in an ‘unbalanced, overall force’…involved in ‘several notable, tactical failures’…They have been used on missions better suited to heavier, armored infantry, and have sustained heavy casualties during the campaign…Russia’s failure to anticipate Ukrainian resistance ‘and the subsequent complacency of Russian commanders’ has caused ‘significant losses’ (as much as 90 percent, in some cases) across Russia’s more-elite units.” 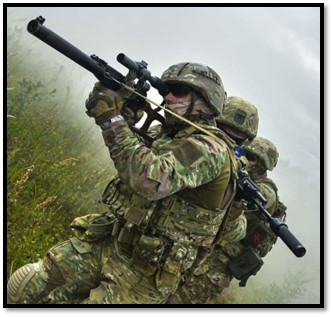 The harsh reality of the current situation is that the Russian Airborne Forces (VDV) definitely have highly-trained “Green Beret” reconnaissance paratroopers available. They’ve been utilized with great effect in the Syrian Civil War but not in Ukraine for some inexplicable reason. They certainly have the requisite training, qualifications, weapons, and equipment, but Russian, military leadership appears reluctant to employ these small, free-ranging, independent teams of recon experts.

British Military Intelligence has noted that, “The VDV have been heavily involved in several notable, tactical failures since the start of Russia’s invasion. This includes the attempted advance on Kyiv via Hostomel Airfield in March, the stalled progress on the Izium axis since April, and the recent failed and costly crossings of the Siverskyi Donets River.”

Ethan Brown wrote for Task and Purpose on June 3, 2022, that, “When a war is about to start, a military must first understand the battlefield…this role had been performed by highly-secretive, special operations (recon) teams charged with intelligence collection, clandestine operation…(which) operate deep behind enemy lines for developing actionable, operational intelligence…The current crisis in Ukraine puts this question to the test…Reconnaissance takes on a new, much more complex flavor…Adaptation is already a staple of special-mission units.”

Russia’s total failure to deploy their elite “Green Beret” recon paratroopers in Ukraine is a monumental and very costly error, demonstrating that they have little understanding of the true combat value of small, special-reconnaissance units scouting ahead of the main formations. They continue to exhibit classic World War II, Soviet, massed, frontal-assault tactics with no apparent regard for advance, intelligence information, and they’re paying an exceedingly heavy price as a result.

Warren Gray is a retired, U.S. Air Force intelligence officer with experience in joint special operations and counterterrorism. He served in Europe (including Eastern Europe) and the Middle East, earned Air Force and Navy parachutist wings, four college degrees, and was a distinguished graduate of the Air Force Intelligence Operations Specialist Course, and the USAF Combat Targeting School. He is currently a published author and historian. You may visit his web site at: warrengray54.vistaprintdigital.com.