for the assaulted, and better for the assailants; they serve rather to

encourage than to prevent homicides, for an unarmed man may be

attacked with greater confidence than an armed man.”

On Monday, June 13, 2022, Ohio became the 23rd U.S. state (with two more already approved for 2022 and 2023, totaling an unprecedented 50 percent) to enact a Constitutional Carry law. Ohio Governor Mike DeWine publicly stated that SB215, referred to as the “permitless carry” or “Constitutional Carry” law, which passed through the Ohio House and Senate without any Democratic votes, took effect.

Literally half of all states have now adopted Constitutional Carry including Alabama (to become effective on January 1, 2023), Alaska (since 2003), Arizona, Arkansas, Georgia (2022), Idaho, Indiana (effective July 1, 2022), Iowa, Kansas, Kentucky, Maine, Mississippi, Missouri, Montana, New Hampshire, North Dakota (for ND residents only), Ohio (effective June 13, 2022), Oklahoma, South Dakota, Tennessee, Texas, Utah, Vermont, West Virginia, and Wyoming. For the most part, the crime rates in those states are lower than in other states since criminals know that virtually anyone may be armed at any time.

The Ohio law allows responsible, law-abiding citizens ages 21 and older to no longer carry a permit or complete the eight-hour handgun training course to carry and conceal a firearm. It also ends the requirement for gun carriers to inform police officers if they have a concealed weapon on them unless specifically asked. Individuals with no convictions for violent misdemeanors within the past three years, or two or less convictions within the past five years, may now carry a firearm under state law without a permit.

Here’s what happens in states that do not honor Constitutional-Carry or right-to-carry (RTC) legislation. There are currently eight “may-issue” states: California, Connecticut, Delaware, Hawaii, Maryland, Massachusetts, New Jersey, and New York, all of which are ultra-liberal, Democrat-controlled states. Interestingly, half of these same eight states (New York, Massachusetts, California, and Delaware) currently rank among the top 12 “Rudest States in America,” according to a recent survey.

I live in highy restrictive Maryland, and our largest city, Baltimore, has extremely serious problems to be certain. It’s one of 15 U.S. cities (including Philadelphia, with a 38-percent increase in homicides within the past two years alone) targeted by President Biden in June 2021 for “gun-violence reduction” via additional funding through the American Rescue Plan. But, at the same time, there are very vocal, outspoken calls, even from the mayor himself, to “defund the police.” The Baltimore Police Department (BPD) has 392 police-officer vacancies (is it any wonder why?) and 14 detective vacancies, and the police commissioner has begged for help in the form of 100 federal agents to assist the city police with their work.

Just a few short years ago, Kay Coles James, president of the highly-respected Heritage Foundation, wrote that, “About the crime, poverty, and despair in Baltimore…Liberal policies have failed the people of Baltimore and inner cities everywhere…For decades…(they) have delivered policies that actually increase crime, degrade educational standards, and make it harder to get work.

“Crime is allowed to fester. When police and prosecutors don’t pursue and punish smaller crimes, criminals remain on the streets and graduate to more serious crimes until things spiral out of control…Baltimore’s homicide rate outpaced all major cities in 2017. In 2018, it had the highest overall crime rate out of the 30 largest cities in America…The left has tried decades of its experiments with miserable results.”

As of 2022, Baltimore had the second-highest per-capita (59 murders per 100k residents) homicide rate in the entire nation, with the highest actual number of murders (348 last year) recently outpaced only by St. Louis, Missouri, with 64 murders per 100k residents. And Missouri currently ranks as the 42nd safest state in the nation. Baltimore’s 2021 Crime Index rating was “2,” meaning safer than just two percent of U.S. cities, or conversely, 98-percent unsafe. These are definitely NOT reassuring statistics.

What is extremely telling is that the two safest states in the country this year, Maine and Vermont (as well as New Hampshire, last year), both have permitless, “Constitutional Carry” in effect, meaning that ordinary citizens may carry concealed firearms without a permit. So, crime is correspondingly reduced to minimal levels.

Furthermore, Ohio’s House Bill 99 allows teachers to carry concealed firearms in schools after less than 24 hours of training, and Governor DeWine signed the new legislation into effect on June 13th. This was clearly in response to the recent massacre of 19 children and two teachers in a Texas elementary school on May 24, 2022. Ohio police currently undergo more than 700 hours of police training, but the governor’s office has stated that over 600 of those hours are directly related to policing and are neither necessary nor appropriate for school teachers.

So, how much firearms training is “enough?” Most people accept military weapons training as more than sufficient. However, during my career as an Air Force officer, I was only required to qualify with a 9mm handgun once per year, for about two hours, firing a mere 40 rounds. That requirement was later reduced to once every two years due to budgetary restrictions and currently applies only to pre-deployment training. By comparison, 24 hours of instruction for Ohio teachers seems like quite a lot.

Fortunately, I also graduated from the highly prestigious Mid-South Institute of Self-Defense/Combat Shooting (still in business), run by acclaimed firearms expert and champion competitive shooter John Shaw and his knowledgeable staff. I went through this training while assigned to a special operations unit at Fort Bragg, North Carolina. The pistol training portion was only 24 total hours, but during that time, we each fired an estimated 4,500 rounds of 9mm ammunition. Constantly loading and shooting, I used a new Glock-17 pistol, which functioned superbly. The ammo, in huge, OD-green, wooden cases, was from government-supplied, vintage, Czech-manufactured stocks (we didn’t ask any questions). So, it seems unlikely that the teachers will be shooting quite that much, but my point is that 24 hours is a fairly decent training period and not to be dismissed by liberal naysayers. 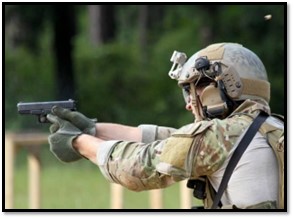 In addition, I’ve held concealed carry permits in Louisiana, North Dakota, South Dakota (all while stationed in the military), and Utah (after retirement, and valid in 37 states). Utah required by far the most extensive training, totaling 24 hours, of which none were dedicated to the live fire of a handgun. It was all classroom instruction. So, once again, 24 hours seems quite reasonable, especially by civilian standards.

The National Education Association (NEA), with nearly three million members,  is the largest labor union in the United States. It represents public school teachers and support personnel, faculty and staffers at colleges and universities, retired educators, and college students preparing to become teachers. When I served as an Air Force Junior ROTC instructor for more than two years, I was required to join the NEA in order to keep my job, and I very quickly discovered that it’s an ultra-liberal organization that constantly pushes the far left, extremist, Democrat agenda.

Not surprisingly, many liberal teachers are highly resistant to the concept of having firearms in schools, even in the hands of other, qualified teachers. They’ve stated that they’re “scared” or even “terrified” of working with armed teachers. They argue that it would be better to address the root problems that cause shootings, such as mental health programs and anti-bullying campaigns or even increasing the number of security guards.

But Joe Easton, the program director of Faster Saves Lives, a pro-gun group, told ABC News that, “If they’re already in the school buildings, they’re in danger, so they deserve the right to protect themselves and the students they’re responsible for, right now.” He further added that this is a voluntary program, and there is no requirement for schools to implement it. Rob Sexton, a lobbyist for Buckeye Firearms Association, testified that teachers and staff members often willingly place themselves between shooters and students to protect them, remarking that, “We owe it to them” to be able to defend themselves. He further noted that the cost of adding school police officers is high, and it may not be a viable solution for larger schools.

Having served as a military officer for 21 years, and a high school teacher for another two and a half years, I can state with total confidence and experience that none of the NEA’s mental health programs, anti-bullying campaigns, or security guards have ever prevented a school shooting incident, nor will they ever.

No sane or rational person, including military members, police officers, and school teachers, ever wants to have to shoot another human being. It’s just not part of human nature for most of us. However, with that being said, any training, even 24 hours, is far better than no training at all. The basic, human willingness to pull the trigger increases exponentially when an armed lunatic is pointing a loaded AR-15 at you. Most well-trained, responsible people will take the shot and head off a violent school shooting in its earliest stages… before 19 children and two teachers have to lose their lives. 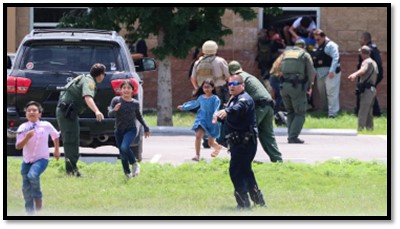 As the British statesman John Stuart Mill astutely observed in 1848, “War is an ugly thing, but not the ugliest of things: the decayed and degraded state of moral and patriotic feeling which thinks nothing worth a war, is much worse…A war to protect other human beings against tyrannical injustice…A man who has nothing which he is willing to fight for, nothing which he cares more about than he does about his personal safety, is a miserable creature who has no chance of being free, unless made and kept so by the exertions of better men than himself.”

Make no mistake: Any shooting incident in a school is essentially a very short war in which an armed aggressor breaks in and terrorizes and murders unarmed children and teachers, just as invading Russian troops have terrorized and ravaged Ukraine for the past several months. And, as we have witnessed time and time again, there is only one solution for stopping the aggressor in a school shooting – either an armed police officer or an armed teacher. The shooters almost never surrender peacefully.

Just as half the nation has now adapted to Constitutional Carry in order to keep their states safer from today’s soaring crime rates under Democratic leadership, other states will soon follow Ohio’s example in permitting school teachers to be trained and armed. As we saw from the recent school shooting at Robb Elementary School in Uvalde, Texas, on May 24, 2022, we absolutely cannot rely upon local security guards or police officers to help or protect us in crisis situations. Numerous, documented law enforcement failures occurred during this one incident alone.

“We wanted to go in, and were told not to,” one officer said. “It got to the point where some of us said, ‘To hell with the chain of command, we’re going in’…We were boiling over, planning to go in on our own,” when a tactical unit arrived from the Border Patrol. They, too, were told to wait outside. So much for the police and U.S. government response to an active shooter, when a single, armed teacher could have made all the difference. The winds of change are in the air, the safety of our public schools is less certain than ever before, and the time for decisive action has arrived.

Warren Gray is a retired, U.S. Air Force intelligence officer with experience in joint special operations and counterterrorism and is an NRA member. He served in Europe and the Middle East, earned Air Force and Navy parachutist wings, four college degrees, and was a distinguished graduate of the Air Force Intelligence Operations Specialist Course, and the USAF Combat Targeting School. He is currently a published author, historian, and hunter. You may visit his web site at: warrengray54.vistaprintdigital.com.