In a 6-3 decision, the U.S. Supreme Court has ruled that the U.S. Constitution means what it says!  The court ruled that a New York State law regarding concealed carry was unconstitutional!  The Court affirmed that Americans have a right to carry firearms in public for self-defense, and the ruling has the socialists losing their minds.  To make the ruling even sweeter, the man that Senator Joe Biden attempted to keep from the court, Associate Justice Clarence Thomas, wrote the majority opinion of the court on his 74th Birthday stating:

“In this case, petitioners and respondents agree that ordinary, law-abiding citizens have a similar right to carry handguns publicly for their self-defense.  We too agree, and now hold, consistent with Heller and McDonald, that the Second and Fourteenth Amendments protect an individual’s right to carry a handgun for self-defense outside the home,” Justice Clarence Thomas wrote in the Court’s opinion, referencing two previous gun cases.  “Because the State of New York issues public-carry licenses only when an applicant demonstrates a special need for self-defense, we conclude that the State’s licensing regime violates the Constitution.”

The decision came as a result of the lawsuit New York State Rifle & Pistol Association, Inc. v. Bruen, and it was the first major gun rights case before the Supreme Court in more than a decade.

The ruling brought out the usual left-wing crazies.  Failed sportscaster and all-around clown Keith Olbermann went to social media with this gem of a tweet: 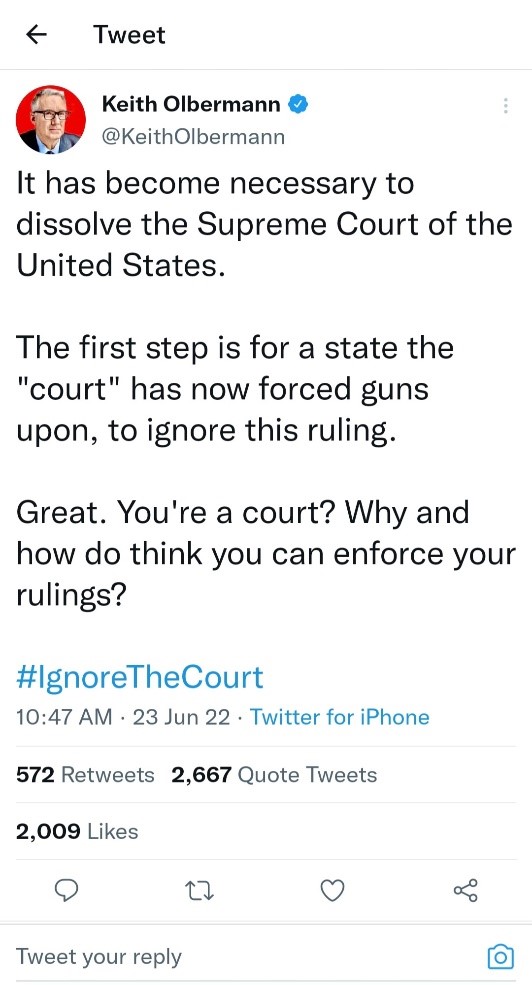 While this ruling is great news, a couple of things are still quite disturbing.  First of all, why did only six out of nine justices get it right?  Secondly, just across the street in the U.S. Senate chamber, 50 liberals and 14 RINOs are debating how to take away more of your rights with their “Safer Communities Act of 2022.”  While this is a great day for gun rights, we still have a long road ahead of us.

That’s all for now folks!  Please keep sending in your questions, tips, and article ideas.  And as always – “Let’s Be Careful Out There.”

Friedrich Seiltgen is a retired Master Police Officer with 20 years of service with the Orlando Police Department.   He conducts training in Lone Wolf Terrorism, Firearms and Active Shooter Response.  His writing has appeared in RECOIL, The Counter Terrorist Magazine, American Thinker, Homeland Security Today, and The Journal of Counterterrorism & Homeland Security International.  Contact him at polizei22@msn.com