I’m always amazed by the large number of people who haven’t bowfished, especially bowhunters. It’s a blast. I hate to admit it, but some of our outdoor activities can cost a bit to get into. For instance, elk hunting, flyfishing, etc. But bowfishing is a sport that princes on down to paupers can enjoy.

When I started bowfishing in 1978 or 79, I started with a $12.00 recurve that I bought from the old Herter’s Catalog. At the time, only the old, green, Fred Bear spools were available for fishing reels. I taped one on my bow and off I went, none the wiser. They were a pain to hunt with. You’d be walking down a brushy creek, throw up your bow to take a shot, and notice that the string had hung up on a bush 10 feet behind you.

The only gear necessary in those early days was a bow (no one used their ‘good’ hunting bow, but used and old bow or one they bought at a thrift store), reel, fiberglass arrow, and tennis shoes (a T-shirt was optional).  Talk about simple joys. I’d just graduated from college and taken a job in Nebraska where I started bowfishing on sandpits, rivers, and creeks. There were a million carp and some gar where I started bowfishing and I had a blast. I’d shoot a boatload of fish and then take them by the Laotians that loved them.

It appears to me that cockroaches and carp can withstand anything short of a nuclear blast, and who knows, they might even be able to thrive in that environment! So as your old hunting and fishing spots are being invaded by newbies, why not take up bowfishing?  After all, if you like fishing and the fish aren’t biting, there’s an old saying “You can throw a lure at a fish, but you can’t make him bite.” Well, I may have paraphrased the saying slightly. I think it might really say: “you can lead a horse to water but…” However, the fish don’t have to be biting for you to entice them to jump on your stringer. Use a bow instead of a fishing rod, an arrow instead of a lure, and presto, who cares if they’re biting or not? Force feed them!

Let’s fast-forward 40 years. Wow, bowfishing gear has changed. Like I said above, in the old days all we had was the old, Fred Bear, green spools. Now, somewhere along the way, Muzzy invented a bowfishing reel. It’s the only way to go. With the Muzzy, after you miss a shot, you can reel the line back in super-fast to get ready for another shot. There’s also bottle-reels, but I’ve never used them and none of my buddies have either. So, I don’t know anything about them.

I like shooting a recurve about half of the time; the other half, I use a Mission Craze II compound. I think you can throw up a recurve and shoot faster, but most everyone nowadays uses a compound. Most bow fishermen that I know don’t use a sight but shoot instinctively. I like a sight with two pins. But remember, the more gear you have hanging on your bow, the more there is for the string to carry, so you decide.

They also protect your fingers when shooting since you won’t be using a release. I went bowfishing last Monday with Travis Oviatt. With all the shooting we did, my fingers were a little raw and that was with using gloves! Wear gloves.

By chance I met Travis in a grocery store parking lot last week. I noticed that he had a GRINZ-N-FINZ decal on his truck, so I approached him and asked him if he liked to bowfish. Turns out that he is a bowfishing guide on the Snake River. One thing led to another, and we were soon out on the river flinging arrows at carp.

I’ve shot hundreds of carp wading in a spring. But if you want to really rack up on carp year-round, here’s the biggest game changer in the last 45 years: bowfishing boats. They are tailor made for bowfishing. They have raised platforms, so you’re elevated and see the fish better. I bet Travis’s platform is nearly 6-feet above the water. When elevated that much, you see a ton more fish than you do standing in my small Jon boat and especially more than when wading. Plus, the elevation lets you sneak up on fish or prepare for a shot or take longer shots.

So, a flat bottom boat that has an elevated platform is the ticket. Then to further sweeten the deal, Travis has lights around the bow of the boat (actually, under the platform) for bowfishing at night. Bowfishing at night is the ultimate. 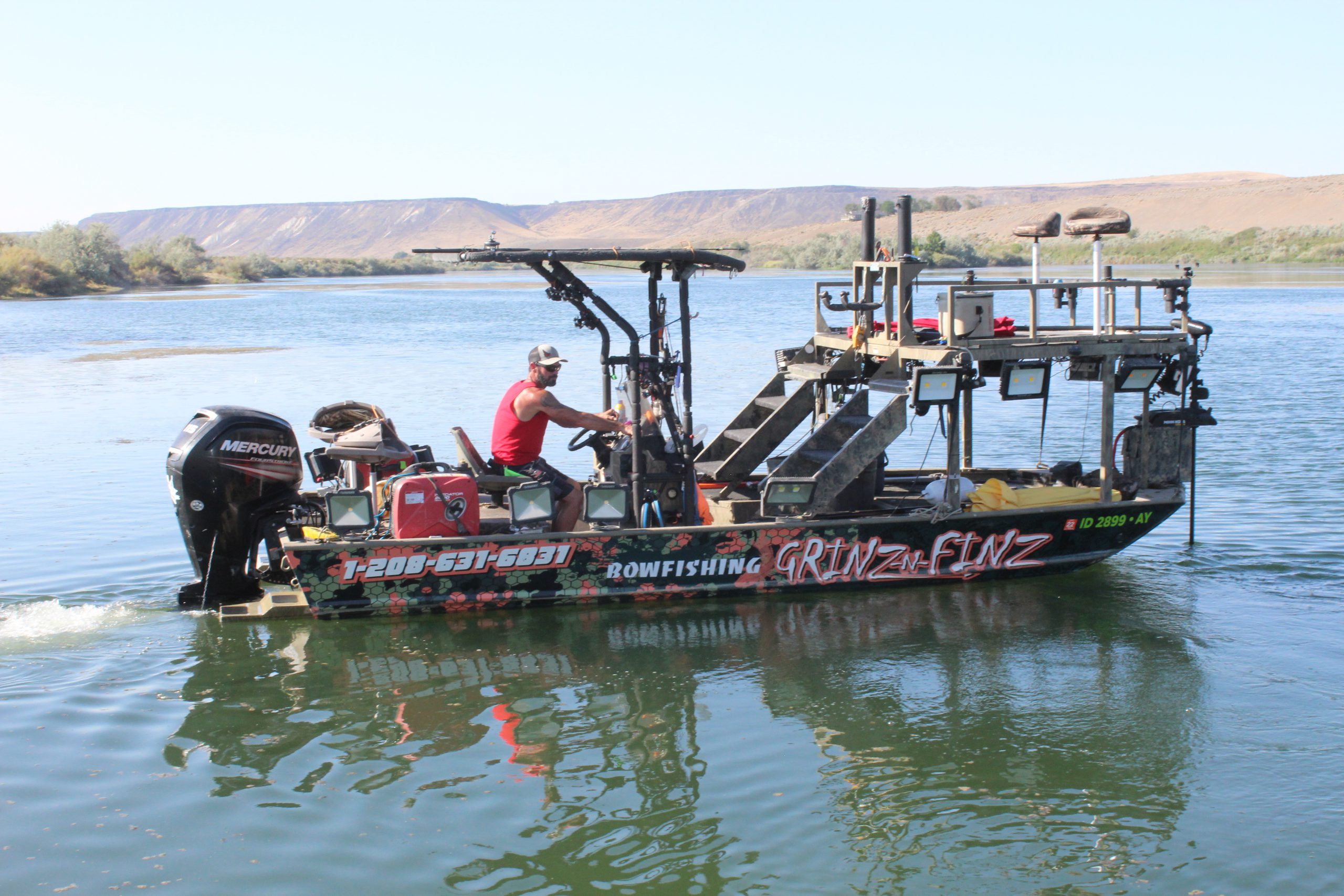 Idaho has a variety of carp species. But one treat that Idaho has for bow fishermen is the Butterfly Carp. They are unique with long flowing fins. To my knowledge Travis is the only guide that has this species in his guiding unit. Due to refraction it’s easy to overshoot and miss fish. Especially the deeper that they are. Travis says to aim 4-inches lower for every foot of depth. 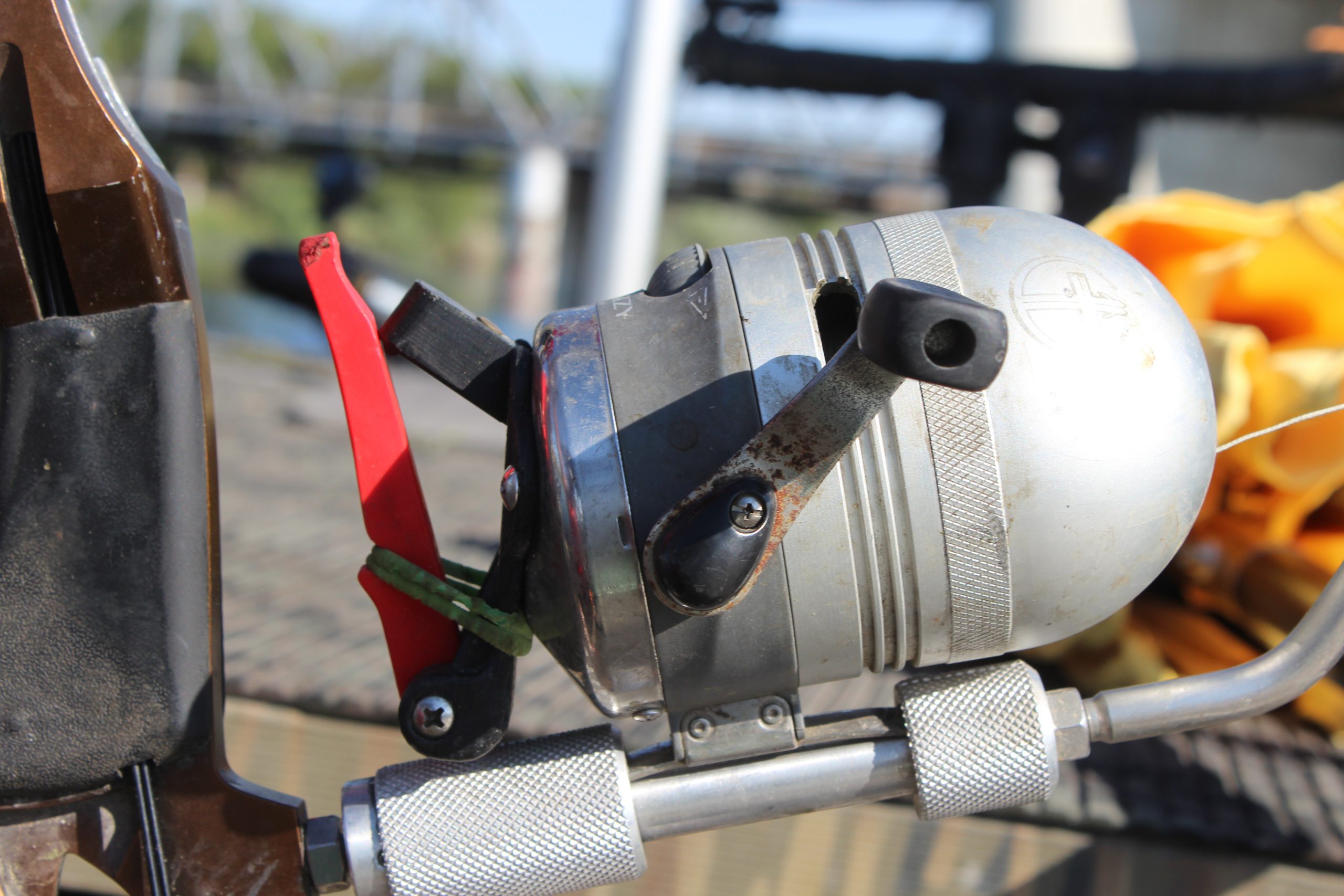 You can see how the Clicky Stick keeps the button depressed so it is always ready to shoot. It is held tight with thick rubber bands you use on with a burdizzo when castrating a bull calf.

-In the old days we used our old bows, but now most people have a specified bow set up for bowfishing. As far as I know, Muzzy has been the leading company for years in making arrows and reels. The reels look like an oversized Zebco reel.

-The arrows are fiberglass. They’re heavy, so they penetrate the water better and don’t deflect up as badly as a lighter arrow.

-Of course, you’ll tie a piece of heavy string to your arrow so you can pull the fish in or retrieve your arrow after a shot.

-Travis had a new gizmo called a “Clicky Stick.” Basically, it presses against the push button on the reel, so you have to pull it back every time to reel in your arrow. This is a cool gizmo. Otherwise, if you forget to push the button and shoot, it will rip the guts out of the reel. I’ve got to get a couple of these.

-Polarized sunglasses. You need these so you can see more deeply and clearly into the water.

To see a short video of our recent bowfishing trip look at the Grinz n Finz Bowfishing Facebook page.