have the right weapons. Usually, this means an array of weapons…

different-sized bombs, and of course some guns for more precision…

an aircraft with advanced sensors that can alert you of anything

nefarious well before it gets to you is priceless.”

On Monday, August 1, 2022, the U.S. Special Operations Command (USSOCOM, or simply SOCOM) announced the surprising winner of its 16.5-month-long Armed Overwatch program. The program was to “provide special operations forces (SOF) deployable, affordable, and sustainable, crewed aircraft systems, fulfilling close air support, precision strike, and armed intelligence, surveillance, and reconnaissance requirements in austere and permissive environments, for use in irregular warfare (such as insurgencies, rebellions, and terrorism) operations.” Five different aircraft companies competed for the lucrative, military contract, offering the AT-6E Wolverine, the Bronco II, the MC-145B Wily Coyote, the MC-208B Guardian, and the AT-802U Sky Warden for testing and evaluation between May 2021 and August 1st, 2022.

Ultimately, the winner was the L3 Harris/Air Tractor AT-802U Sky Warden, by L3 Harris Technologies of Waco, Texas, which came as a stunning surprise to many because it seemed to be the least-sophisticated of all the five choices. It was essentially an armed variant of the very simple, rugged, Air Tractor AT-802 crop duster, produced since 1990, and designed for ultra-low-level, agricultural spraying at a white-knuckle altitude of only about 10 feet. Unknown to most Americans, however, the U.S. Department of State Air Wing (DOSAW) and DynCorp, a military contractor, once operated as many as 22 of these aircraft in Colombia, Ecuador, and Bolivia for counternarcotic missions, spraying marijuana fields with herbicides or attacking drug distribution points in the dense jungles.

The AT-802U armed variant was created in 2008, and was first displayed at the 2009 Paris Air Show. The DOSAW/DynCorp aircraft normally carried two GAU-19/A .50-caliber Gatling guns, and two seven-shot pods full of unguided, 70mm rockets. They were fired upon by drug cartel members at least 200 times, often taking light battle damage, but no AT-802s were ever lost in action, proving it very rugged and reliable in combat. Today, DOSAW has retained only two unarmed versions, both painted yellow. The remaining aircraft were distributed among the police forces of Colombia, Ecuador, and Bolivia, and are rarely flown anymore.

The Air Tractor web site notes that, “Years of coca crop eradication missions in South America resulted in the development of lightweight, composite, ballistic armor for the AT-802U cockpit ‘bathtub’ and engine compartment.” 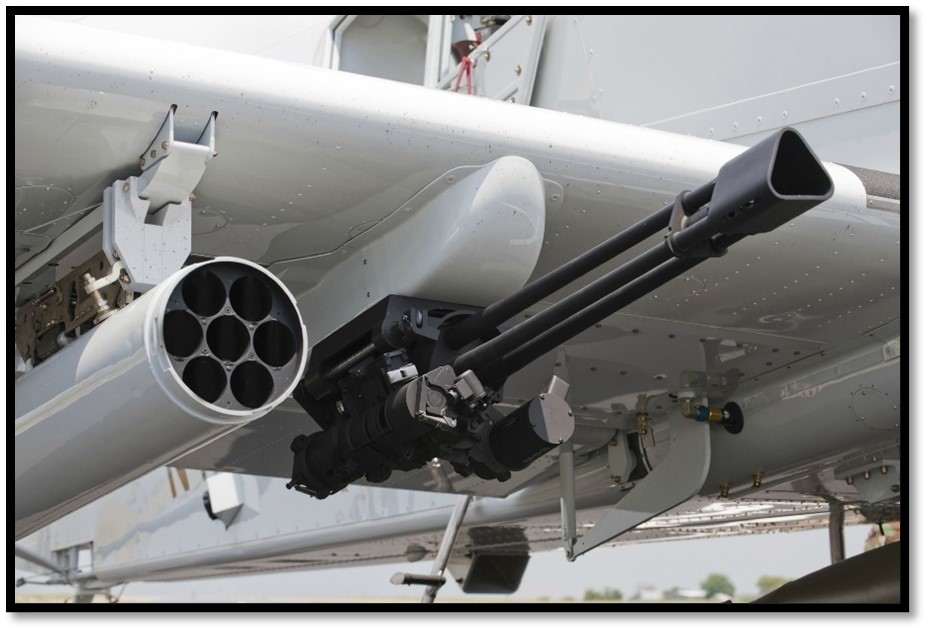 In my previous, Gunpowder Magazine article on “Armed Overwatch Attack Aircraft” from August 17, 2021, I wrote that, “The AT-802U Sky Warden is a variant of the successful, Air Tractor AT-802 crop-duster airframe, with a belly-mounted, MX-15D FLIR sensor and eight weapon stations. It’s the largest, single-engine, turboprop aircraft in the world, combat-proven, with a Titanium Dome, five-blade propeller, 1,600-horsepower engine, and is capable of carrying up to four tons of bombs, rockets, missiles, and sensor pods.

“In particular, Kenya has an urgent need for overwatch aircraft to replace the armed (a sensitive and controversial subject) AFSOC (Air Force Special Operations Command) U-28A Dracos deployed there. Al-Shabaab (‘the Youth’) terrorists maintain a stronghold in the dense, Boni Forest, and all along the Somali border region, and U.S. and Kenyan Special Forces teams frequently require an armed overwatch aircraft on station nearby for on-scene, intelligence collection or close air support.

“But al-Shabaab has launched more than 900 attacks into Kenya over the past (four) and a half years, including a vicious attack at Manda Bay Airfield on January 5, 2020, that destroyed an American Beechcraft King Air 350 reconnaissance aircraft, damaged five more aircraft, including an AFSOC DHC-8-202 Dash 8 Foxhound-4  ISR asset, and killed three American DoD contractors. The Pentagon carried out 63 MQ-9A Reaper Block 5 ER (Extended Range) drone strikes in neighboring Somalia alone in 2020, clearly indicative of the increasing, al-Shabaab terrorist activity in the volatile region.

“The Kenya Air Force (KAF) tentatively ordered 12 Air Tractor AT-802L Longsword attack aircraft, a very-heavily-armed variant of the AT-802U, with 10 weapon stations, from L3 Technologies in June 2017, but has since missed two deadlines to complete the agreement due to internal, political upheaval (and other complicating factors), so the AT-802L Longsword arrangement remains in perpetual limbo for the time being.

“Given that the primary focus of the new, Armed Overwatch program is expected to be for Africa in general, and Kenya in particular, and the Kenya Air Force has experienced great difficulty with AT-802L Longsword acquisition,” SOCOM’s very recent selection of the AT-802U Sky Warden suddenly makes a great deal of sense, especially since President Biden recently redeployed hundred of Special Forces soldiers to Kenya (June 2021), and nearly 500 U.S. troops to neighboring, terrorist-infested Somalia (May 2022), after 700 U.S. soldiers were totally withdrawn from Somalia in January 2021.” 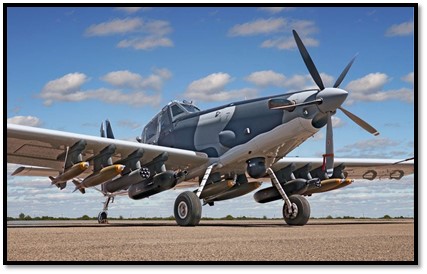 In contrast, the basic AT-802U Sky Warden has no internal, retracting FLIR sensor anymore. The advanced, Scorpion helmets and AAR-47/ALR-47 sets are optional instead of standard, and there are only eight weapon stations instead of 10, so the Sky Warden is a lighter, simpler, less-complex design.

What both aircraft have in common is a Pratt and Whitney PT6A-67F turboprop engine rated at 1,600 horsepower, and a Titanium Dome, five-blade, Hartzell aluminum propeller, providing higher speed and maneuverability than most helicopters, drones, or  cargo aircraft used for supporting special operations missions. Ballistic armor around the cockpit and engine, ballistic glass windshields, and self-sealing fuel tanks are standard equipment, as well as tandem cockpits with dual controls for the pilot and weapon systems officer (WSO.) It’s a big aircraft, with a 59-foot wingspan.

However, since the Sky Warden was originally designed as an ultra-low-altitude, civilian cropduster, there are no military ejection seats, just some AmSafe inflatable restraints in both cockpits. Also, without ejection seats, the new, takedown, GAU-5A Aircrew Self-Defense Weapon (ASDW) in 5.56mm will not be included, since it’s normally packed inside the seat survival kit of the ACES II fighter/bomber ejection seat. The pilot and WSO will have to rely upon just the issued, Glock-19 Gen. 4/5 service pistols on their survival vests if shot down in hostile territory.

The AT-802U can take off in only 1,400 feet with a full load of fuel and weapons. It can land in just 1,200 feet, and cruise at 180 to 192 knots, with a range of 800 nautical miles with one hour on station, or 400 nautical miles with up to five hours on station in the target area. AT-802U or AT-802i (modified by IOMAX) Archangel armed variants are currently in active, military service with the Royal Jordanian Air Force (10 aircraft), the Egyptian Air Force (12 aircraft), and the United Arab Emirates (20 aircraft originally, but most have been transferred to Egypt, Jordan, and Yemen [three aircraft.]) 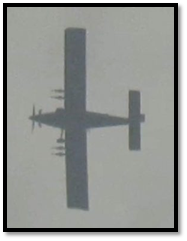 The SOCOM contract calls for an initial batch of six AT-802Us for $170 million, with a ceiling of $3 billion for the entire fleet of 75 aircraft. These aircraft will be apportioned into four AFSOC squadrons of 15 aircraft each, plus a training squadron of 15 additional aircraft.

The Sky Warden has eight weapon stations. The two centerline stations, C1 and C2, are designed to carry 500-pound bombs, such as the laser-guided GBU-12 or GBU-49, or the GPS-guided GBU-38. Then, there are six wing stations, L1, L2, L3, and R1, R2 and R3, but only the two inboard stations, L1 and R1, are optimized for carrying guns, with internal chutes to feed ammunition from the forward chemical hopper to the guns beneath the wings. Reportedly, up to 900 rounds of ammuntion per gun may be carried internally.

The problem with this aircraft is that the AT-802U has no internal, retracting, FLIR sensor for night navigation and targeting, so an MMSS (Multi-Mission, Sensor Suite) Pod 1, containing an L3 Harris/Wescam MX-15Di FLIR sensor for the pilot and a larger, MX-20D FLIR sensor for the WSO, occupies the inboard, L1 station in all armament configurations for the aircraft, leaving R1 as the only remaining gun station. 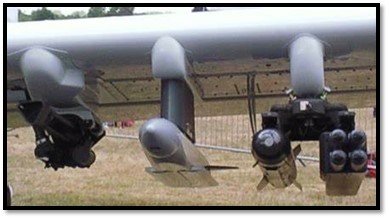 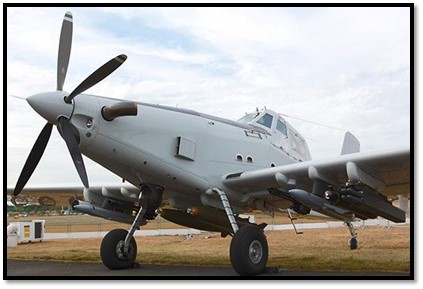 Oddly enough, the SOCOM contract for Sky Wardens comes precisely at a time when the Air Force is trying to divest itself of its other light-attack aircraft, comprised of a small fleet of three AFSOC (6th Special Operations Squadron) A-29B Super Tucanos, and Air Combat Command’s (81st Fighter Squadron) two AT-6E Wolverines, all acquired for the now-defunct, Light-Attack/Armed-Reconnaissance (LAAR) program that began in 2007. These are expected to be sold to foreign nations in the near future.

For SOCOM, a highly-sophisticated, close air support aircraft to deal with enemy jet fighters and surface-to-air missles in a high-threat environment is not the intended purpose of the AT-802U Sky Warden. Rather, it’s realistically designed to operate in permissive airspace on counterinsurgency missions, such as the aerial operations that have been conducted in place like Afghanistan, Iraq, Syria, Somalia, and Kenya. The most important requirement is that the plane can fly easily, shoot what it needs to shoot, and take off and land on rough, austere runways and cleared fields, instead of established air bases, if necessary.

The Sky Warden may not be sleek, or pretty, or fast, or a “Top Gun,” air-to-air dogfighter, but that’s not what our special operations forces need for the Armed Overwatch mission. Instead, the AT-802U is tough, rugged, combat-proven, can withstand heavy battle damage and keep flying, and offers a wide array of diverse armament selections for troops on the ground in the ever-changing scenarios of modern, unconventional warfare.