What Is The Best Mountain Pistol?

“What Is The Best Mountain Pistol?” is a title that will surely stir up a lot of controversy. I’m sure some reader will have a long-lost uncle in their lineage who had two bears charging him at once. He only had a single shot .22, and he shot a rock between the two charging bears. The bullet split in half, luckily each half hit each bear between the eyes and they both slid in stone cold dead at his feet.

Sure, I’ve shot 1,200-pound steers with a single shot .22 between the eyes and dropped them like a sack of potatoes, but that doesn’t mean it’s the perfect caliber. A buddy was telling me about a guide buddy of his who, for some reason one day, only carried a 9mm. During the course of the day, a brown bear blew out of the brush and flattened a client. The bear was on top of the client and the guide started emptying his 9mm into the bear. Miraculously he killed the bear and the client survived. All that they could figure was that every time the guide shot the bear, it’d reach back and bite at the spot where it was shot. Luckily, on one of the first shots, the bullet hit the bear in the heart. He kept reaching back biting the spot where the bullet hit and finally expired by the time the guide emptied 15 rds. into it.

Granted, sometimes weird things like the above story can happen, but that doesn’t mean such incidents are the norm! You don’t want to bet your life on such an anomaly. Surely everyone knows that a 9mm isn’t a good bear gun. I once had a 900-1,000 lb. range cow charging me. I shot it between the eyes, and it charged me, and I ran and dove under a trailer. It kept coming back hunting me. Long story short, finally on the 13th shot in the head it stayed down. Don’t bet your life on the “This happened one time in the history of the Solar System” scenarios. Don’t carry a 9mm to stop larger wild animals.

For decades I carried a .357 Magnum. I do a lot of bear hunting and one day got thinking, “I see too many big bears here in Idaho over the course of the season,” so I switched over to a .44 mag., which is what I recommend. And thinking back, one time I walked up on a big buck that I’d just shot. In a flash, it jumped up and charged me.

We were in tall grass. I went running back backwards shooting as fast as I could. The bullets didn’t even faze him. It was like I was shooting blanks. I fell and he about ran over me. I jumped up right fast and luckily, he ran only a few feet past me and fell over dead. Go with a .44 mag.

I hear people recommending a 10mm or a .45 auto. You can compare the ballistics, but the .44 mag tops them both. You may argue that it’d be nice to have a high-capacity magazine of 10mm, compared to only 6-shots in a .44 mag revolver. My response: Carry HKS speed loaders and become proficient with them.

In all actuality, when it’s panic in the disco, you’re going to be lucky to get off 2-shots, especially if you’re carrying a high recoil pistol. Plus, the thing that makes me nervous is carrying a semi auto pistol in the mountains. On a hard week of elk hunting, you’re likely to get wet, encounter a lot of dust/dirt, and face overall tough conditions that might cause a semi auto to jam-up. I trust the reliability of a revolver more than a semi auto. One time, my wife and I were canoeing a river and flipped the canoe. I held the revolver that I was carrying upside down, poured the water out of the barrel and stuck it back in the holster and kept on paddling. 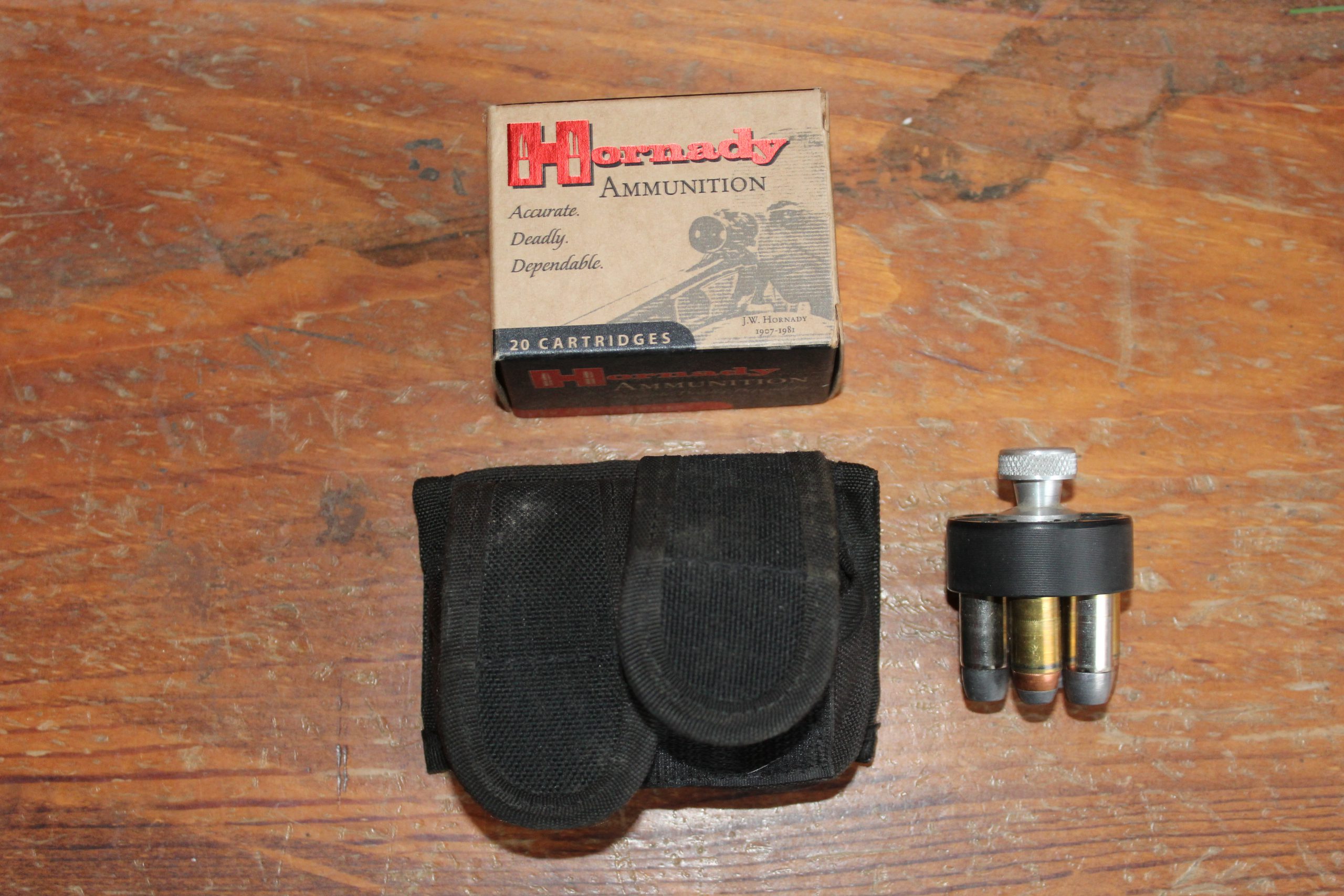 To be able to reload your revolver muy pronto carry HKS speed loaders.

Almost as important as which pistol you carry is which ammo you use. I’m sure a lot of you readers know this, but since it is such an important topic, I want to make sure I cover it. You don’t want to carry the same bullets in the mountains as you would in town. For self-defense in town, you’ll want to use something like the Hornady Critical Defense that is a faster expanding bullet.

I carry a Smith & Wesson 329PD. But I will forewarn you, it kicks so bad that I can barely empty it. I put on some Pachmayr grips, which make it a hair better, but it is still not enjoyable to shoot. I also put on a Crimson Trace laser sight for when I’m trailing wounded bears at night and when they come into my camp.

Good luck on making your choice. Choose wisely. Your life and the ones you love depend on it.

Tom has been an Outdoor Writer for over 20 years and has columns with numerous magazines, has weekly outdoor columns with multiple newspapers, websites and freelances for many other publications and has e-articles & books on Amazon Kindle. He publishes 325-375 articles/yr. He’s on Pro-Staff with numerous Outdoor companies and conducts 40-60 seminars/yr. from Texas up to Vegas and on up to Alaska at the big shows and has taught hundreds of seminars at Cabela’s, Sportsman’s Warehouse and Bass Pro Shop and is a guest speaker at various events.