Truck Survival Kit For The Outdoorsman

Us outdoorsmen meticulously plan out our outdoor adventures. We buy all of the latest gear:

Binoculars with range finders, the best knife, latest camo patterns, greatest scent covers, perfect head lamps, the cutting-edge calls, the newest broadheads, and the list goes on and on.

But most don’t give one thought to our trucks. These are what gets you out to your hunting spots! If your truck plays out, you’re done. Your hunt is over. It’d behoove you to change this thought pattern. Today I want to list out some steps that you can take to ensure you spend more time hunting/fishing and less time hitch hiking.

Let’s start off with some disasters I’ve encountered. I can name a few times when something started sounding weird on my rig just before I left home that ended up causing problems soon thereafter on the hunt. Remember, fix it at home. The problem’s going to be a whole lot bigger out in the boonies.

One time my truck started sounding a little weird right before I was leaving for a hunt. I had our Maintenance Engineer look at it, but he couldn’t find anything wrong; so, I took off on a 6-7 hour drive to go moose hunting. Halfway there, in the middle of nowhere, my water pump shelled out. Luckily a highway patrolman stopped to check on me. He radioed for help and a wrecker came and drug me 70 miles to the nearest town. I spent the night there and luckily was back on the road in 30-hours. Morale to the story: Things are not going to get better if you put in your ear plugs and ignore some strange noise. Deal with it before you leave town. 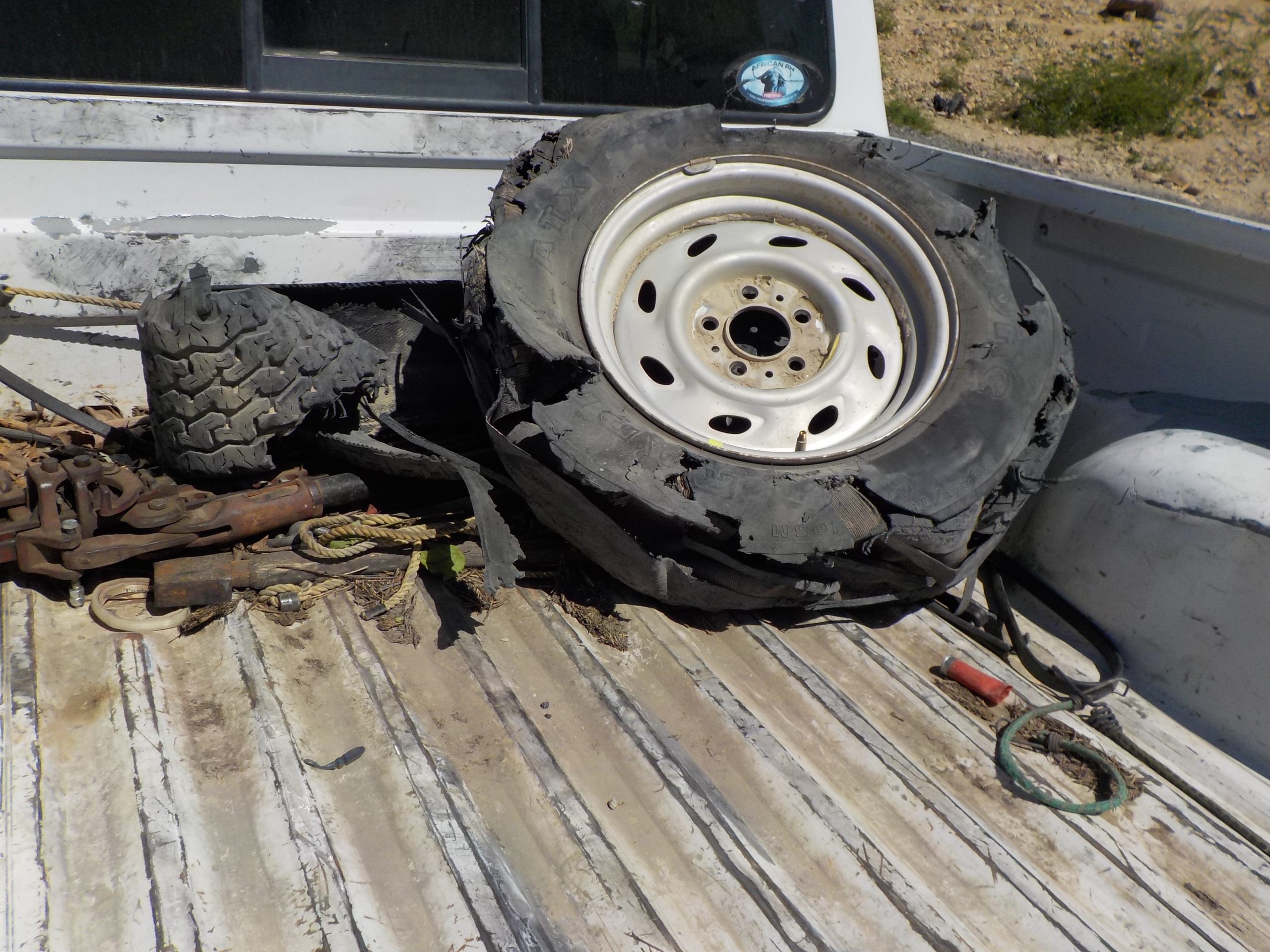 I hunt and fish in rough country. I always carry 2 spare tires.

Some unexpected challenges pop-up out of the blue, but some we can prevent. One year when moose hunting over by Yellowstone, I woke up three mornings in a row with flats. I’d hunt all morning and then run to town to fix a flat.

Getting to where I do a lot of my crappie fishing, the road is rough. The last hour of travel is on a gravel road and then down a steep canyon. I’ve had three blow-outs and a flat in the last few years on this road. But… the fishing is awesome (I’ve caught up to 277 crappie), so, of course, I keep going back.

On one flat they pulled a 3 ½-inch rock out of the tire. Another time Katy and I blew the whole tire off the rim.

MORALE TO THE STORY

Now I always carry two spares. If you drive an older rig, you can go to the junk yard and buy a wheel and tire relatively cheaply for your second spare. Don’t buy cheap 4 ply tires. Buy thicker ones or you’re asking for trouble in the terrain where we hunt.

Before we wrap up on tires, one time, I got back to my truck after being in the backcountry backpacking and a tire was super low. I always carry one of the little air compressors that plugs into my cigarette lighter. It can be a life saver. I’ve used it quite a few times.

A must-have tool is a Handyman jack.  You do not want to be stuck using the rinky dink, factory jack that came with your truck. Half the time you’ll be changing a flat in the mud or snow, and factory jacks are often dysfunctional. I’m not just recommending a Handyman Jack for changing flats. I’m mainly recommending you carry one for when you get stuck in wet, slick places.

A million times I’ve been stuck in deep ruts, mud, or snow drifts, and have had to jack up my truck and improvise to get out.  If you’re stuck in deep ruts and high center (curse of all curses), jack up your truck, put rocks under the tires and in the rut, so you can back out.

If no rocks are available, you can use sticks. I remember one time; I rode my four-wheeler downhill on an old logging road early in the morning. I went over a big snow drift, but it was crusted over, so there was no problem. BUT that evening, coming out, the crust had melted, and I got buried badly.

Finally, I walked to camp, getting there well after dark. Luckily, the area refroze overnight and had a good crust. I kicked snow under the tires, laid some 1 ½-inch thick sticks sideways across the tracks and got right out. 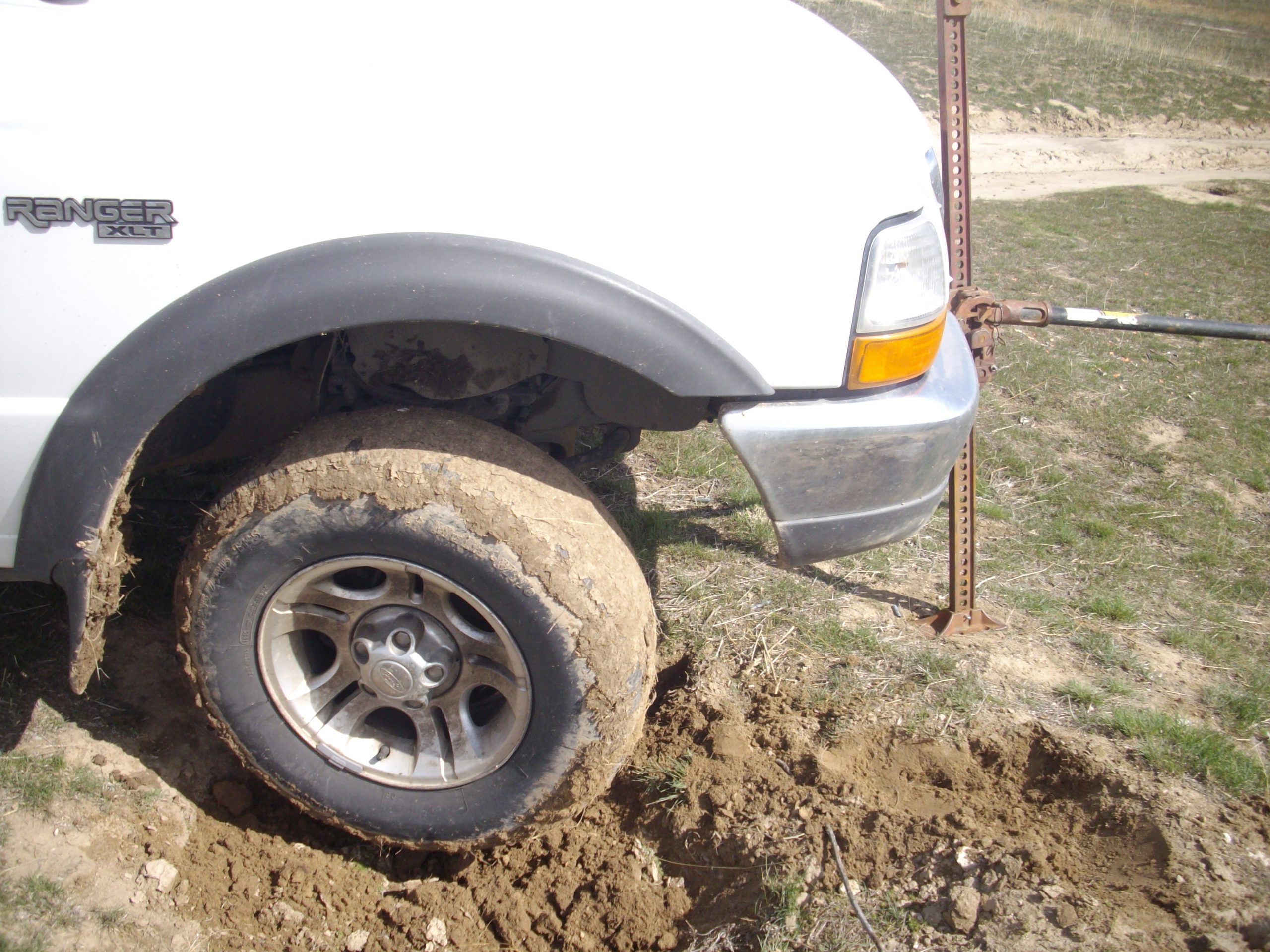 How many times have I driven off in a badger hole and got stuck while out in the high desert country? Carry a Hi-Lift jack and a shovel and you can get out in a hot second.

Another must-have item is a shovel. When you jack up your truck or four-wheeler, you can throw dirt under the tires. Or if you hit high center, you can scoop snow out from under your frame.

You’ll use a shovel a lot. One time, I was out whistle pig hunting in the high desert country and ran into a badger hole. A big hole! I used my handyman jack to jack up the front of my truck and then used the shovel to fill the hole and drove right out. I’ve been buried in badger holes a couple of times.

Carry a few tools. You can pick up a medium sized socket set cheaply at a pawn shop. Have a few screw drivers, open end wrenches, and sockets. Use these to make minor repairs so you can limp back to town.

When you get your radiator hoses and belts replaced, always save the old ones. (I keep mine in a bag behind my seat.) That way, if you blow out a radiator hose, or a belt snaps, you can slap on the old one (using the above tools) and make it back to town.

A million times I’ve had a truck over-heat, run out of water, etc. Always have a few jugs of water in back of your truck. And if necessary, you can drink it.

Speaking of water. A couple of years ago, the pipe on the radiator on my Ford Escape cracked while Katy and I were out on the high desert dove hunting. We tried to limp closer to civilization. The engine would get hot, we’d pull over, let it cool, and add more water. Unfortunately, it cracked the heads, and the rig was toast. So, decide how much you can push things when you have radiator problems, and be careful; I’ve had three rigs toasted due to radiator issues.

Always have an ax or chainsaw with you. You ever notice how many trees and big branches are laying in the woods? Uh huh. They can also fall on the road behind you. One time I took my nephews and brother-in-law backpacking. A big blizzard hit and we barely made it out. In some spots I’d be hugging the side of the old logging roads and the snow drifts would be hitting the headlight on my uphill side.

Three trees fell across the road after we went in. Luckily the trees were small and the three young fellows were able to throw them aside. But what if they had of been bigger? So, always carry a chainsaw or an ax.

Always, always, always have a chain. I don’t have a clue how many times I’ve needed a chain whether to help myself or someone else that was stranded. You don’t want one that is too or too weak. You don’t want to give the chain a jerk and have it snap. I’ve heard of them snapping like a rubber band and zipping through the back window. That’d be a bad deal.

I don’t have winches on any of my rigs, but they would be nice. One buddy carried a come-a-long. You can tie one end off to a tree and pull yourself out. He carried a big metal stake and a 2-lb. sledge hammer so if he got stuck out in the high desert country, he could drive down the stake and tie off to it.

And speaking of chains, in snow/ice it sure helps to slap a set of chains on your tires.

How many of our disasters occur at night? Most of them! So, you’ll want plenty of light. If you’re by yourself, you might prefer a headlamp. If you have a buddy, you might want a flashlight. I just found a company named HybridLight. They make solar-charged lights that hold a charge for 7-years. I ordered three items and can’t wait to test them out. I think, regarding your light sources, it’s best to leave them in your truck or they won’t be there when you need them.

It’s also smart to have a survival kit onboard for yourself. Having a functional truck is no good if the driver is dead. A few essentials don’t take up much room. I used throw in a tarp; I’ve tied one off the side of my truck and slept under it before. But really, a small compact backpacking tent might be a better option. I use Alps Mountaineering tents. The Taurus or Helix model would work great.

Then, of course, always have more than enough water and food in case you break down. I once read an article and the author’s advice always stuck with me. He said never return to your truck totally out of food and water after a hunt. If something happened, you’d be sunk. And, of course, have fire-starting gear.

I’m sure you’ll think of a couple more must-have items that fit your individual situation, but hopefully the above list keeps you alive so GPM doesn’t lose a reader!