other modular rifles…Almost everything on this rifle is completely

interchangeable…(with) some of the best suppression capabilities

ultra-lightweight…the most well-balanced rifle you’ve ever

held in your hands.”

SIG Sauer USA, of Newington, New Hampshire, began producing their popular MCX (Mission-Configurable Weapon System) carbine in 2015, designed specifically to be compact, reliable, configurable, and as quiet as possible when using a suppressor. It employs a short-stroke gas-piston system, like that of the battle-proven HK416 carbine, to reduce recoil and improve reliability of the weapon. It can be rapidly converted (within seconds) from 5.56mm NATO chambering to .300 AAC Blackout (.300 BLK), while using standard, 5.56mm magazines.

SIG MCX upper receivers are fully compatible with Colt M4A1 carbine lower receivers for various military applications. But, with the gas-piston system, there’s no need for a recoil buffer, buffer spring, or buffer tube. So, the Colt’s cumbersome, sliding stock is replaced by a simpler, lighter, side-folding stock that further reduces overall length, size, and visibility of the weapon, especially when stored, or tucked away out of sight.

Elite, special operations units such as Delta Force and SEAL Team Six wanted an extremely compact primary weapon. So, the Land Warfare Resources Corporation, International (LWRCI) of Cambridge, Maryland, produced the M6A2 Ultra-Compact Individual Weapon (UCIW) in 5.56mm, an M4A1-style firearm with the gas-piston system of an HK416 carbine, for the British 22nd Special Air Service (SAS) Regiment and Special Reconnaissance Regiment (SRR) in 2012. It reportedly bested the new, HK416C Compact PDW carbine in competition, which is a remarkable feat in itself.

Its barrel is only seven inches long in a weapon measuring just 22 inches overall. But, its primary drawback is the Colt M4 recoil-buffer system, requiring an inline sliding stock instead of a true folding-stock configuration for maximum portability and concealment. This is precisely why the SIG MCX was created – to enable the greatest-possible firepower in the smallest-possible package, which became the SIG MCX Rattler.

The current, civilian-market, semiautomatic variants are as follows:

SIG MCX Rattler SBR, in 5.56mm or .300 BLK, with 5.5-inch barrel. This is also available as a selective-fire, military version.

Each of these models is fully-configurable, with more than 500 possible combinations of specialty equipment to suit the operator’s needs for any mission.

SIG MCX LVAW (Low-Visibility Assault Weapon) “Black Mamba,” a selective-fire model in 5.56mm or .300 BLK with 6.75-inch barrel and SIG factory suppressor. It was specifically designed to be no larger than a compact submachine gun, but offer considerably greater firepower in a very quiet package – about as quiet as the famous, H&K MP5SD3 submachine gun. As Travis Pike wrote for Task and Purpose on August 9, 2021, “It’s a low-issue item, used for specific mission sets, and a fascinating design that seems to be popular among the elite of the elite.” 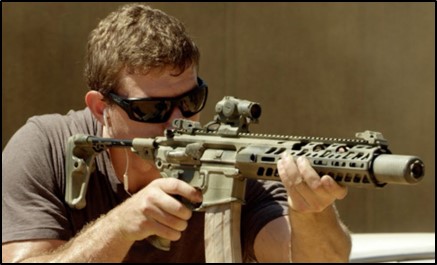 SIG MCX Raptor, since December 2021, is derived from the SIG MCX Spear, except that it has an ultra-short, 7.9-inch barrel. It is currently the shortest in the world for all three cartridges for which it is chambered: 7.62x51mm NATO (.308-caliber), 6.8x51mm (.277 SIG Fury), and 6.5mm Creedmoor (6.5CM.) The U.S. Army has selected the 6.8x51mm round for their next-generation battle rifle, and the U.S. Special Operations Command has already officially adopted the 6.5CM as their new round for sniper rifles and assault rifles to replace 7.62x51mm weapons, so I’d expect to see great interest for the Raptor from the special operations community in particular.

Since 2018, Delta Force has adopted modest quantities of the new suppressed SIG MCX Virtus LVAW “Black Mamba” with a 6.75-inch barrel in either 5.56mm or .300 BLK (but mostly .300 BLK) and gas-piston operating system; the SIG MCX SBR (short-barrel rifle) with nine-inch barrel (in .300 BLK); and the ultra-compact SIG MCX Rattler personal defense weapon (PDW) in both 5.56mm and .300 BLK chamberings with a 5.5-inch barrel and overall length of just 16 inches. The Rattler “is the shortest rifle that’s on the market today…shorter than any M4 ever produced,” according to SIG officials. Any of these three weapons may utilize the quick-detachable SIG SRD556 or shorter “SRD556K” suppressors, and they have definitely been photographed in the hands of Delta operators in Afghanistan and Syria.

The .300 Blackout round is most effective with a sound suppressor (SIG MIL-SRD762-Ti) and produces the same muzzle energy with a nine-inch barrel as a Colt M4A1 carbine in 5.56mm with a 14.5-inch barrel. Delta and the Navy SEALs wanted an extremely compact weapon with a barrel length of much less than nine inches for close combat in confined spaces. When used with subsonic ammunition, it’s extremely quiet, but useful only at relatively short ranges. Spare magazines full of supersonic rounds are often carried by special operations forces when longer-range action (out to approximately 440 yards) is required.

Matt E. of The Firearms Blog (TFB) reviewed the SIG MCX Rattler on May 23, 2019, writing that, “The gun packs a huge punch for a very small package. The overall length is around 16 inches…chambered in .300 Blackout as well with a 5.5-inch barrel… there have been a number of special forces teams around the world who use the MCX Rattler with a Trijicon RMR (sight)…and it has been 100-percent reliable…The gun is an absolute blast to shoot, and the recoil is extremely manageable. I was surprised how easy it is to keep on target…SIG’s three-prong flash hider…does a good job minimizing muzzle blast…the MCX Rattler…has met if not exceeded my expectations. The gun just runs and has a massive amount of firepower in a tiny package…without any issues…after one year, it’s been fantastic!” 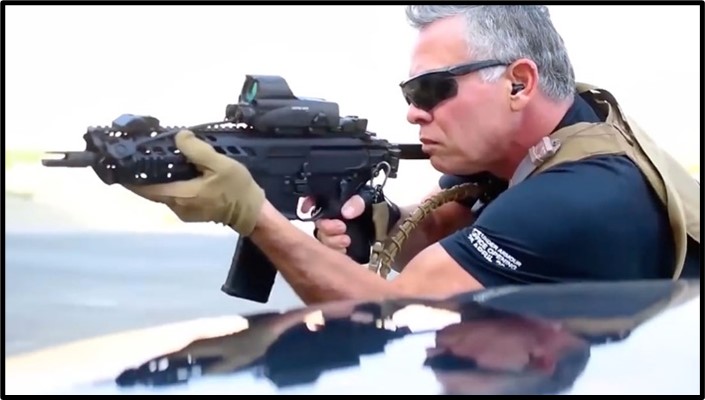 King Abdullah II of Jordan with his SIG MCX SBR in 2018. Photo credit: Government of Jordan.

The very latest news regarding the SIG MCX series is the USSOCOM official “notice of intent” on May 19, 2022, for a five-year contract to purchase a new, personal-defense weapon (PDW) for special operations personnel (translation: Delta Force and SEAL Team Six). The goal was to develop “a highly concealable .300 Blackout upper receiver group and (folding) buttstock kit solution for the M4A1 platform…USSOCOM HQ has been researching and reviewing different systems since 2017…The PDW system will allow operators to have maximum firepower in a concealable weapon…Except for SIG Sauer, the vendors did not meet the technical requirements (for) the weapons.” USSOCOM’s new PDW will be the tiny SIG MCX Rattler in both .300 Blackout and 5.56mm chamberings, and the contract includes suppressors.

Protecting the U.S. Embassy in Kyiv