After an explosive investigative news story from Gabe Kaminsky was released by the Daily Caller, Georgia Representative Marjorie Taylor Greene has demanded that the FBI stop using an unconstitutional form to intimidate Americans into signing away their 2nd Amendment rights. 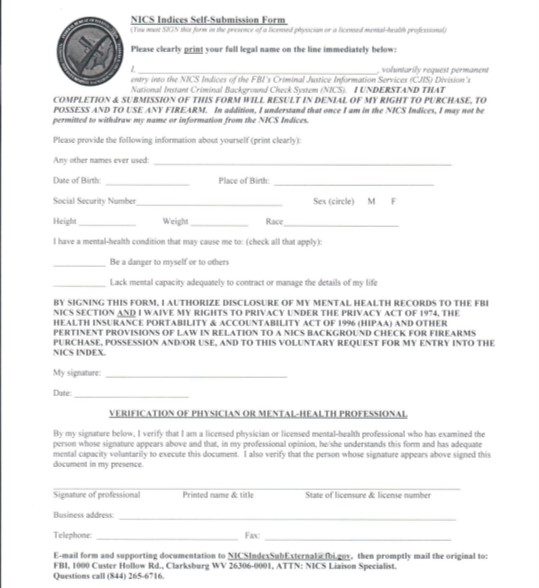 “Congress has been made aware of the Federal Bureau of Investigation’s (FBI) illegal usage of a form entitled the “NICS Indices Self-Submission Form.” This form was created by FBI personnel and used by FBI agents to coerce and intimidate Americans who were not convicted of any crime into signing away their right to obtain a firearm, a right protected by the Second Amendment to the United States Constitution. We, the undersigned elected members of the United States House of Representatives, demand full accountability from all law enforcement agencies, including the FBI. No government official—unelected, appointed, or even elected—has the right to infringe upon Second Amendment rights. Reportedly, and hardly coincidentally, the FBI claims to have discontinued use of this form immediately after its existence was made public. Yet even if it is true that the FBI no longer uses the form, it is a violation of federal law for the FBI to continue to prohibit any signer of such a form from being denied a firearm purchase or otherwise impeded from exercising their Constitutional rights.”

Once this form is signed, your constitutional right to keep and bear arms is gone forever. The FBI claims this form is no longer used, but Rep. Greene wants to be assured that those who were intimidated into signing the unconstitutional form, will have their gun rights restored immediately.

The letter was signed by only 14 other members of Congress. My Representative, Kat Cammack of FL-03, did not sign it, and she’s supposedly pro 2nd amendment. I’ll be giving her a call later.

Only 14 republicans signing this letter is pretty sad. Find out if yours did or didn’t (they probably didn’t) and ask them why not.

That’s all for now folks! Please keep sending in your questions, tips, and article ideas. And as always – “Let’s Be Careful Out There.”

Friedrich Seiltgen is a retired Master Police Officer with 20 years of service with the Orlando Police Department. He conducts training in Lone Wolf Terrorism Counterstrategies, Firearms and Active Shooter Response. His writing has appeared in RECOIL, www.floridajolt.com, The Counterterrorist Magazine, American Thinker, Soldier of Fortune, Homeland Security Today, and The Journal of Counterterrorism & Homeland Security International. Contact him at polizei22@msn.com.