Consider saving some weight and making your rifle

easier to maneuver…anything in the .30-06 class…

is a perfect candidate for a short barrel.”

I purchased my classic, Remington 700 ADL, bolt-action rifle in .30-06 with open sights in December 2005 for a mere $383, which was quite a good deal. A decent-quality, Bushnell Banner 3-9x40mm zoom scope cost only $60, with Leupold rings and scope mounts for $17, and a Limbsaver Kodiak-Lite camouflaged sling with swivels added for $23 in 2020. In February 2021, I had the barrel professionally shortened by a master gunsmith from the factory length of 22 inches to 18.8 inches. I wanted increased portability in the thick woods and ease while entering and exiting hunting stands or blinds. The cost was a hefty $255, but fine gunsmithing and comfortable carry are certainly worth the price.

There has always been a certain appeal for compact, bolt-action rifles that are simple, rugged, lightweight, and ideal for hunting medium or big game in the deep forest.  They are also ideal for the close confines of a camouflaged hunting blind, where longer barrel length may interfere with quick, handy movements while tracking wild game. Since about 90 percent of the deer and other game harvested in the United States (and the rest of the world, for that matter) are taken at 100 yards or less, a short barrel is perfectly adequate for most hunting situations, and quite suitable for taking deer, elk, moose, or even bears.

I recently (November 2021) replaced the standard, factory recoil pad with a new-and-improved, Limbsaver AirTech #10805 pad for $50. The new pad absorbs 70 percent of felt recoil, to handle stout, .30-06 loads, and brings my total investment to a fairly affordable $788, which is still quite reasonable for a customized, hunting rifle.

Using this same shortened rifle and recoil pad on the evening of Saturday, January 8, 2022, I took an eight-point buck at 70 yards, dropping him straight down.  Between the superb cushioning of the new, Limbsaver pad, my thick, winter clothing (it was 27 frosty degrees in the snow-covered forest), and the sheer excitement of the moment, I don’t remember feeling the substantial recoil at all, which is now so mild that even my 10-year-old grandson loves to shoot the rifle!

Adriel from HuntingGearGuy.com reviewed the Remington 700 ADL on December 24, 2017. He writes, “Among centerfire, bolt-action rifles, the Remington 700 is THE platform. It has been in production since 1962 and is an incredibly popular rifle…a low-cost option, with a synthetic stock…in the budget, hunting-rifle category… Usability of the Remington 700 is great, and exactly what you’d expect from a time-honored design.

“With a blind magazine, the 700 ADL is missing the detachable magazine that all other budget, hunting rifles come with these days…and it can be easy to…jam it up. On the positive side, the bottom of the stock is completely smooth, and you won’t damage or forget the magazine.

“Aftermarket parts for the Remington 700 platform are extremely abundant, and there is a lot of choice of suppliers for those parts… Aftermarket triggers (etc.)…The Remington 700 action has been so popular in precision shooting…So, when you buy a Remington 700, you gain access to a very healthy aftermarket of parts…Conclusion…it’s a low-priced entry into the Model 700 platform.” 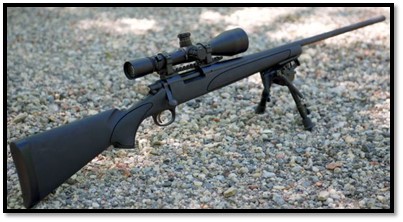 On June 16, 2019, Bill Marr added for RifleShooter.com that, “The ubiquitous, Remington 700 bolt-action rifle has received praise and criticism since its introduction…Remington 700 ADL…with a scope, rings, and bases, all for (an) insanely low price…I couldn’t pass it up…The stock on the 700 ADL is injection-molded plastic with a rubber recoil pad…a traditional pistol grip, and a narrow hunting-style forend with a QD swivel located on the front and the rear…a typical, hunting rifle stock, which is perfect for a hunting rifle, especially one at this price point.

“The blind magazine is loaded and unloaded through the ejection port…certainly slower to load than a detachable box magazine…(but) for hunting applications, it works just fine…Great gun for the money…Yes, you can get factory rifles with better triggers and more options, but in general, they’ll cost more. Easily upgradable…Parts, stocks, chassis, and triggers are widely available through multiple channels…Accurate: I’ve always had good luck with the accuracy of out-of-the-box Remington 700s…overall, the guns shoot well, especially at this price point…I still managed to squeeze out a .628 MOA group as configured!”

My own preferred, hunting load for the Remington 700 ADL has been the Remington Premier Scirocco premium, bonded, lead-core bullet in 150 grains until now. I liked the bullets mainly because they are very high quality, extremely accurate, and typically expand to twice their original diameter, when the industry standard, the norm, is currently 1.5 times the original diameter. But, like all high-velocity, lead ammunition, the bullets are still prone to approximately 25 percent fragmentation (above the “fragmentation threshold” of 2,260 feet per second velocity) of tiny, even microscopic, lead particles, which is a very valid, environmental, and human-safety concern. 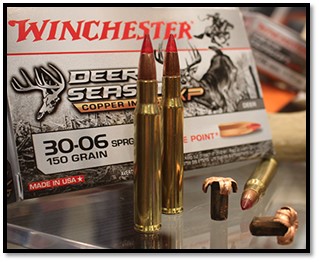 Nathan Robinson of Winchester said, “It (Deer Season XP Copper Impact) has performed excellently by…putting deer down faster than ever. The same great, rapid expansion…but the copper bullet is tougher, and penetrates farther.” The Winchester XP Copper Impact round shoots precisely to the same point at 100 yards on my target bullseye as the Remington Scirocco, requiring no scope adjustment whatsoever. Plus, I recently acquired two boxes of SIG Sauer Elite Performance Copper Hunting ammunition (solid copper, hollow points, or SCHPs) in 150 grains, so I’m now well-stocked with copper hunting ammunition for the foreseeable future.

Copper is twice as hard as lead on the Mohs Scale, yet it still expands quite rapidly, and it retains 95 to 100 percent of its original, bullet weight without fragmenting. And because copper is 26.6 lighter than lead, a 150-grain, solid copper bullet has the same flight profile as a 150-grain, lead bullet, but is longer, with an improved ballistic coefficient, and so will penetrate and perform more like a heavier, 190-grain, lead bullet.

I’ve only harvested four eight-point bucks with this particular rifle, between December 2015 and January 2022. One ran 60 yards before collapsing, another one ran just 40 yards, and the remaining two dropped straight down on the spot. They were killed instantly, including my latest buck, taken efficiently from 70 yards away after the barrel was shortened. This is exactly what any responsible hunter wants, a quick, clean, humane kill. 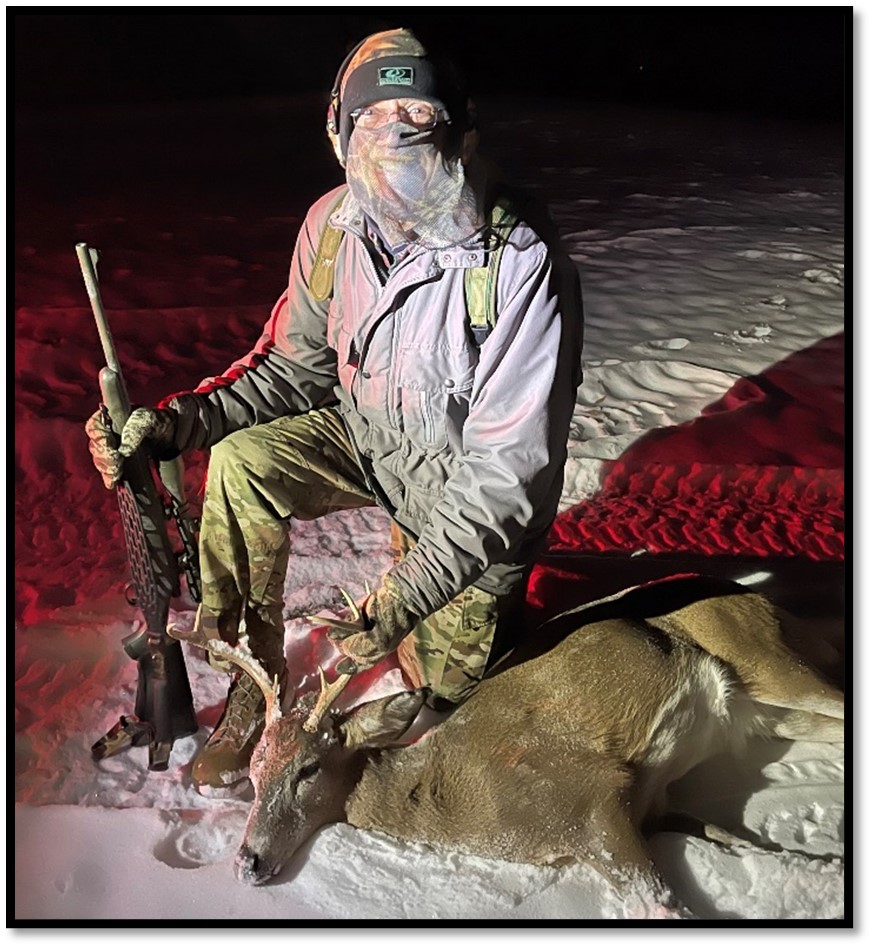 The ultimate goals are a successful hunt and fresh venison for your family. Alex Robinson wrote for Outdoor Life magazine on May 1, 2013, “The Ultimate Red Meat: Most people can’t even tell the difference between a beef steak and a venison steak…It’s way healthier than beef…Deer are leaner and wilder animals…less fat than beef (about half the fat, and one-sixth the saturated fat)…Venison has more protein…more vitamins and minerals…Venison taken from a healthy deer…might be the safest, red meat on the planet…chicken and ground beef were the ‘riskiest meats’…Wild venison is the ultimate red meat. It’s healthier, tastes better, and is safer than any meat you can buy in a store.”

Taking a responsible, respectful, conservationist approach to deer hunting ensures a fun and successful hunting season, healthy meat on the table for your family for many months to come, and the preservation of the sport for future years and future generations. So, good luck, and good hunting! 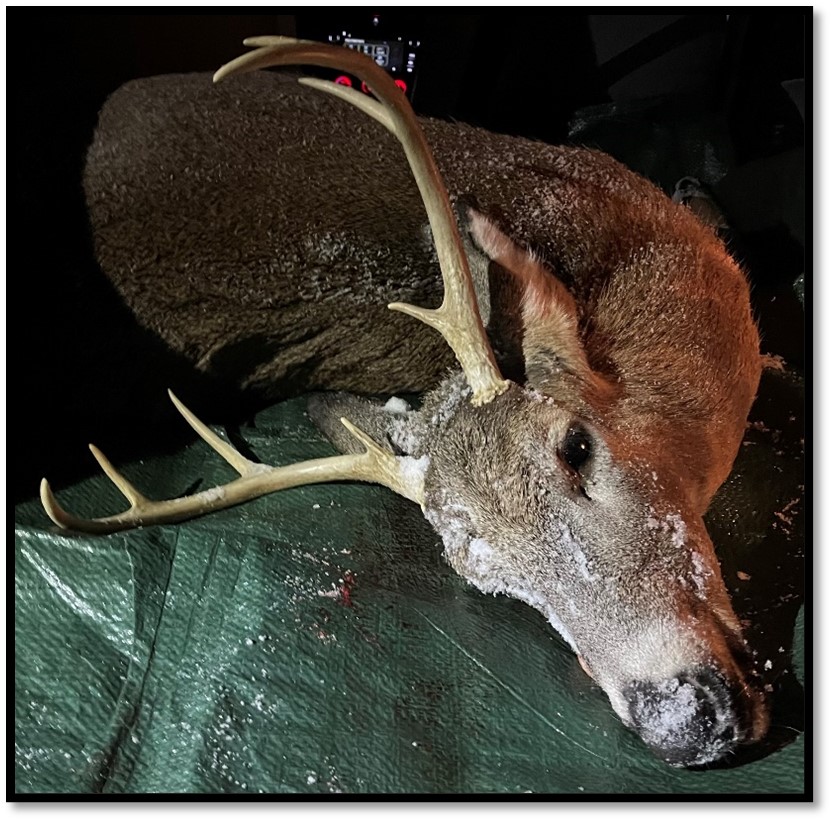 Overall, I love my Remington 700 ADL short rifle! It’s simple, practical, weather-resistant, comfortable to shoot, remarkably easy to clean and maintain, and deadly accurate in the field. In my state, deer hunting season with rifles runs for just five days at the end of November, then into early December for 10 more days, with three final days in early January. That’s not much time, so it definitely pays to be fully prepared with the Remington meticulously cleaned and carefully sighted-in to hit a two-inch bullseye almost every time from 100 yards.

This past January, I took the elusive buck shown above in about four inches of snow on the 17th evening of the 18 total days of rifle season, so you just never know what to expect, or when it might happen. That’s part of the thrill of deer hunting: that one great, heart-pounding moment when a roving, healthy buck suddenly appears within range, and you have him cleanly in your sights. For this coming rifle season, my compact, Remington 700 ADL will certainly be up to the task, already shooting neat bullseyes, and portable enough for outdoor use anywhere in the deep woods, where the large-antlered bucks roam silently in the shadows of twilight.

Warren Gray is a retired, U.S. Air Force intelligence officer with experience in joint special operations and counterterrorism, and is an NRA member. He served in Europe and the Middle East, earned Air Force and Navy parachutist wings, four college degrees, and was a distinguished graduate of the Air Force Intelligence Operations Specialist Course, and the USAF Combat Targeting School. He is currently a published author, historian, and deer hunter. You may visit his web site at: warrengray54.vistaprintdigital.com.