I first shot the Umarex Gauntlet II .25 cal. PCP airgun at the Professional Outdoor Media Assn. convention last year. I’m big time into airguns and have one of the original Gauntlet’s, but, of course, I had to try out the new one.

A few things hit me when I opened the box on my new Umarex Gauntlet II. First off, it looks a little more striking than the regular Gauntlet. I can’t really tell you why. Maybe because my first one was black, and the Gauntlet II is a flat, dark earth color. The stock also has a few subtle differences that makes it a little more attractive. 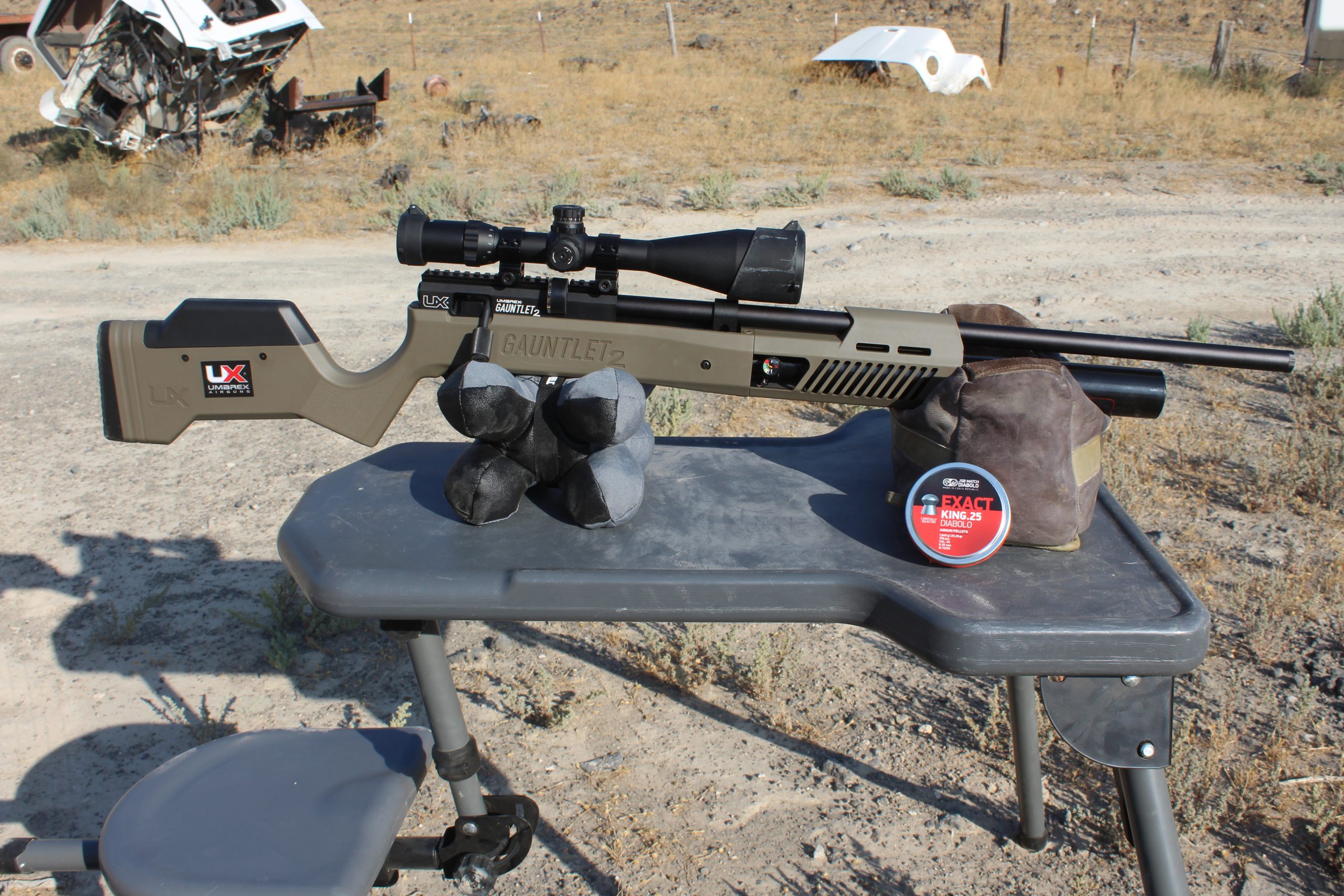 The first step with any rifle is to mount a scope and then sight it in.

First, I mounted a scope. I was scheduled to go on a pigeon hunt the next day and happened to have a new CP 4-16×56 AO scope laying around, so I slapped it on.

A lot of people put on a 3-9x scope since it’s an airgun, so they will be shooting only 20-40 yards with no need for much magnification. Here’s my figuring. I’m a hunter and hunt a lot with airguns. The varmints that I hunt are small (especially ground squirrels) and have small kill zones. So, to me, it is imperative to have high magnification. Plus, on a good day I may be shooting at ground squirrels out to 100 yards. These modern airguns are not little Ralphie’s Red Ryder. They have some reach.

A day later, I loaded my truck and headed out pigeon hunting. The first step was to sight in the Umarex Gauntlet II. I set up a target and within a few minutes I had it dialed in and was ready to hunt.

I was shaky this day, which adversely affected my shooting. After getting dialed in, I shot two ½-inch groups, but I bet it will easily shoot a 3/8-inch group and most likely down to ¼-inch. Don’t think bad of the rifle because of my sub-par shooting that day. To get good groups, I shoot JSB pellets.

The Umarex Gauntlet II trigger has a super long pull. The trigger is adjustable, but I did not spend much time with that; by now I was chomping at the bit to go pigeon hunting. Dove season had just opened and where I set-up to shoot, I normally see quite a few doves. Maybe due to the heat, this day there was only a small handful of doves present, so I hurriedly ran over to some silos to pigeon hunt. 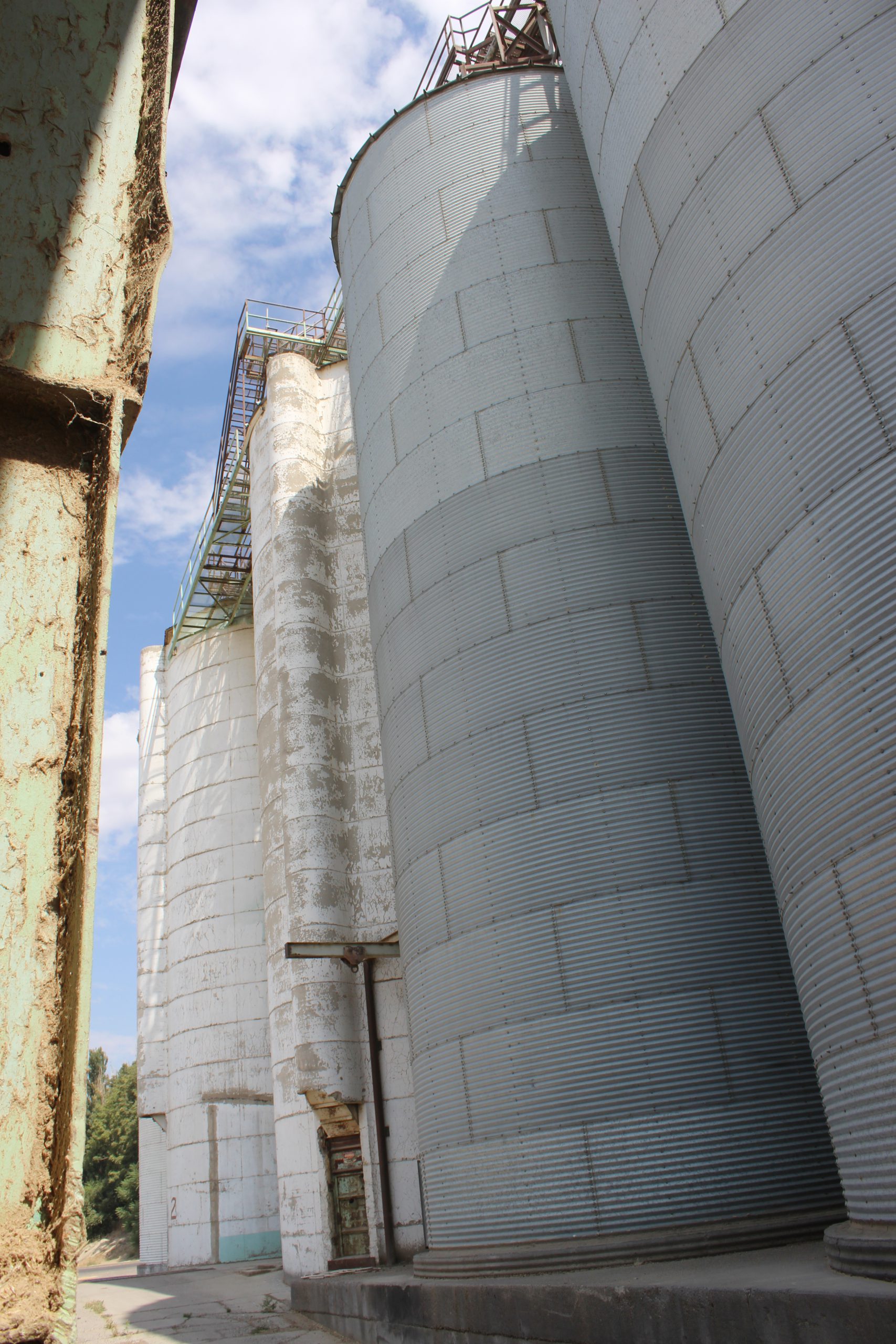 To adequately kill pigeons at this long of distances I use a .25 cal. They are really high when they’re setting on the hand rails above the silos.

The above scenario repeated itself for quite a while. I soon had a pile of pigeons scattered around and I went out and picked them up. A lot had taken the long plunge off the side of the silo, but two thirds of them had not fallen. I crawled up on the silo and gathered all that I could, but many were out on a precarious ledge that I could not safely reach.

I then went driving around the feedlot and picked off a few more. I soon saw an old buddy, Shawna Gill. She used to pigeon hunt with me, and we happened to stop near a silo that was out in the pen a ways. A few years ago, there were some pigeons on top and I asked her if she wanted to try a shot. Gee, she hit one that was a good 100 yds. away. Nothing like getting out shot by a girl with your own gun!

There were a few pigeons on top. When they flew, there were still a few starlings. She leaned against her truck and half free-handed, she hit a little turd-bird. We weren’t as far away this time, but Umarex is going to dump me and put Shawna on Prostaff. I definitely can’t let the Umarex crew see this article or I’m toast.

As we come to a close, if you’re in the market for a good PCP airgun, I love my new Gauntlet II. If you’re wanting to get into airguns for hunting small game, I strongly suggest that you buy a .25 cal. They have much better killing properties than the lowly .177 cal. or even the .22 cal. 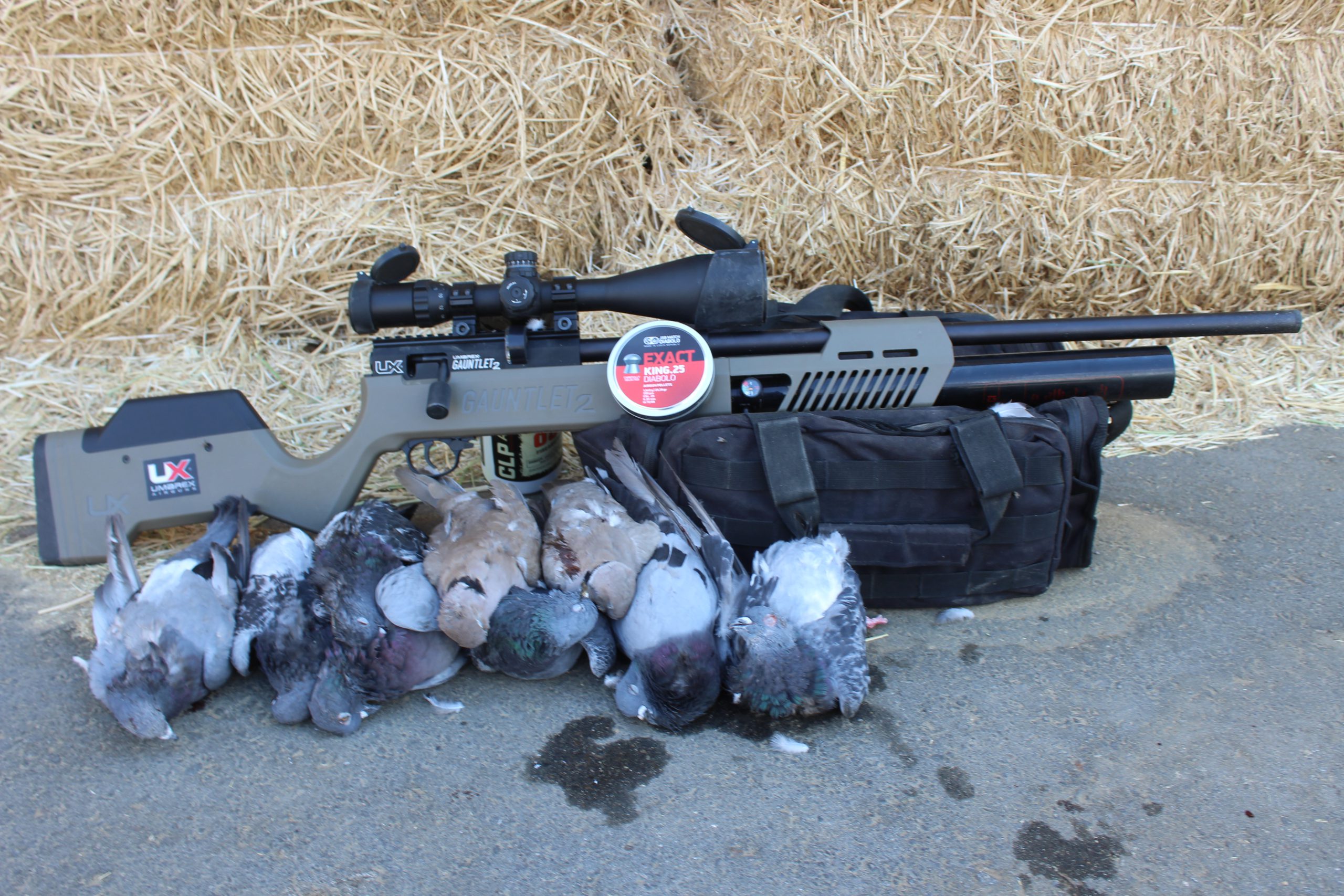 About 1/3 of the pigeons/doves that I shot this morning.

-Huge 24 cubic inch onboard tank that fills to 4500 PSI. The regulated pressure has also been increased to 2100 PSI. These advances increase both regulated shot count and power output considerably.

-In .25 caliber form, the Gauntlet 2 will shoot lighter lead pellets in the 980 FPS range and generate around 51 FPE with popular standard weight pellets.

-Baffling has been increased in the barrel to reduce the noise level by 8dB.

-I always get excited while hunting and lose track but I think I shot 4 magazines before it dropped down to 2,500 psi.