“Moral anguish about the murder of a human was invented by

people far from the war. An armed enemy is not a person,

but a target. You take up a weapon against my country,

that’s it, you’re a target…And if the target is hit, I feel the

pleasure of a job well done…In the first days of the war,

it was like a safari, enemy vehicles moving in dense

The ongoing war in Ukraine has produced a dizzying array of combat weaponry on both sides, ranging from the very old to the very new and sophisticated to the locally produced to the imported and even captured enemy weapons. I recently wrote about some of the Russian Federation’s most-advanced sniper weapons in my Gunpowder Magazine article on “Lobaev Sniper Rifles in Action” from April 20, 2022. Now, let’s examine the vast inventory of sniper rifles that Ukraine has acquired for its stalwart defense, especially since the Russian invasion began on February 24, 2022.

The standard-issue, Ukrainian Army sniper rifle, with 10,000 in their inventory, has been the time-honored, battle-proven, Soviet-manufactured Dragunov SVD-63 (since 1963) semiautomatic weapon in 7.62x54mmR (Russian). It has a 10-round magazine and an effective range of 875 yards. The upgraded SVDM model with synthetic stock and handguard, which is currently in frontline service with the Russian Federation, has been captured from enemy forces and pressed into service as well. In this same caliber, much older rifles such as the semiautomatic, ex-Soviet Simonov AVS-36, in service from 1936 to 1941, and the Tokarev SVT-40 (since 1940 and formerly in storage) semiautomatic rifle have been seen with the Ukrainian Territorial Defense Battalions. Even the bolt-action, Mosin-Nagant M44 carbine, made from 1943 to 1948, has recently seen active combat service again.

Ukrainian-manufactured rifles in this caliber include the semiautomatic Fort-229 (special forces weapon) and Fort-301 infantry rifles. In addition, the local Zbroyar weapons factory in Kyiv, Ukraine, founded in 2007, produces the Z-008 sniper rifle, the militarized, VPR-308 variant, and the newer Z-10 rifle, all very high-quality firearms. The Z-10 is currently the preferred, sniper rifle, gradually replacing the older Dragunov SVD-63. Captured, Russian weapons in this caliber include specific versions of the multi-caliber Izhmash SV-98 bolt-action sniper rifle and the infamous Orsis T-5000M “Terminator.” 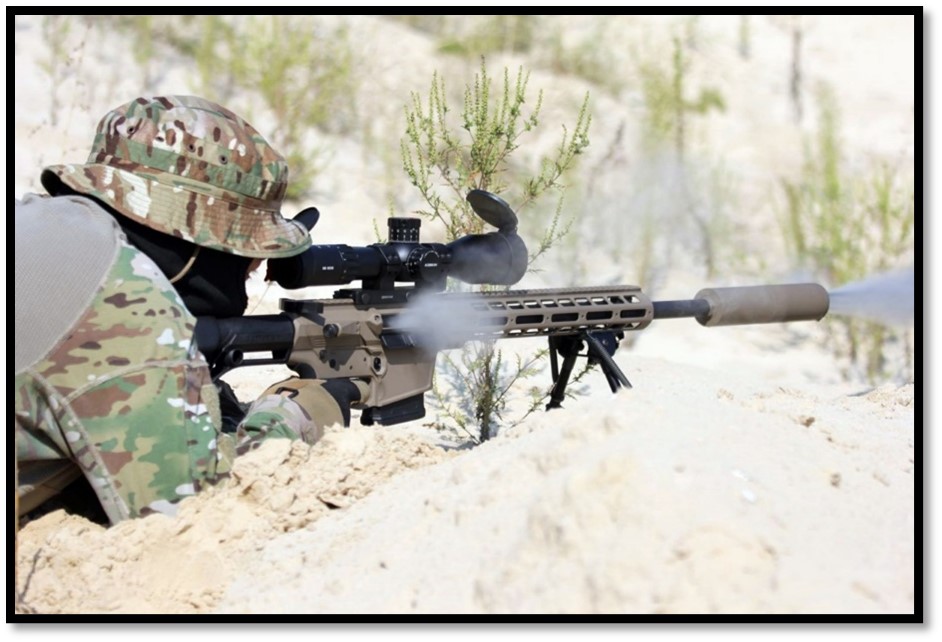 Among the more-unusual calibers for sniper weapons, Ukraine uses the Israeli-produced IWI Tavor STAR-21 designated-marksman weapon in 5.56x45mm with 18-inch barrel. There’s also the odd Gopak-61, a suppressed, short-range bolt-action weapon in 7.62x39mm Russian, primarily for urban counter-sniper operations; and the very quiet, integrally-suppressed Russian VSS Vintorez (an acronym for “Special Sniper Rifle”) in subsonic 9x39mm. It has a 10-round magazine and is popular with Ukraine’s elite SBU Alpha special operations group. Captured, Vintorez rifles have also been used in combat.

Moving on to their more powerful, dedicated, long-range sniper weapons, Ukraine employs the famous Accuracy International (British) AWM in .338 Lapua Magnum. The SBU Alpha group also uses the German-made Blaser R93 Tactical 2 in .338 LM. Other rifles in this caliber used by Ukraine are the high-powered version of the captured Russian SV-98 bolt-action rifle; the captured Orsis T-5000M “Terminator” in the same caliber; and the Ukrainian-made VPR-338 version of the Zbroyar VPR-308 rifle.

This was the weapon that they issued to French-Canadian sniper Olivier Lavigne-Ortiz, callsign “Wali” (“Guardian” in Arabic), who was mistakenly billed as the world’s deadliest sniper in early March 2022, probably for propaganda purpose. He volunteered to serve with the Norman Brigade of the Ukrainian International Legion of Territorial Defense. He allegedly killed 11 Russian soldiers within the next few weeks, from rooftops at the northern edge of Kyiv and later in the Donbas region. He returned home to Canada in early May 2022.

Lavigne-Ortiz candidly admitted that, “This war is like playing chess without knowing what the other pawns are…We got engaged with the Russians in very close distance, like 50 meters, and at that point they knew we were there…We were lucky. Now I know how it feels to be engaged by a tank…The whole war effort is amateur. They (the Russians) are not awesome. They don’t have the capabilities of NATO forces. Russia is a poor country, and it reflects in their weapons. They destroy everything; they just keep shooting at houses again and again.” 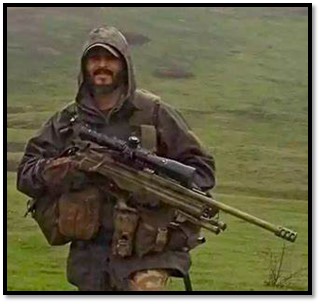 The advanced category of “anti-matériel weapons” (.50-caliber or greater) encompasses the U.S.-supplied Barrett M82A1/A1M/A3 series and similar M107A1 rifle in .50 BMG, and the bullpup Barrett M99 design in .50 BMG. Captured, Russian weapons include the KSVK and OSV-96 rifles, both in 12.7x108mm. Canada has also provided the PGW Defense LRT-3 rifle in .50 BMG, and the Czech Republic sent 19 ZVI Falcons in the same caliber.

Sniper warfare is a brutal and very personal business, with snipers often seeing the faces of the men that they kill. Not everyone has what it takes to pull the trigger under such circumstances. This author knew a successful, ex-Marine Corps sniper from the Vietnam War who later became an Air Force chaplain because he was so bothered by his haunting past. Snipers take a deep, psychological and demoralizing toll on the enemy, dropping soldiers from incredible distances, usually without warning, and high-value targets such as enemy officers, and even generals, can deepen that impact significantly.

In Ukraine, at least two of the estimated 15 Russian generals killed in action thus far have succumbed to accurate, sniper fire. Major General Andrei Sukhovetsk, a veteran paratrooper and deputy commander of the 41st Combined Arms Army, was killed on February 28, 2002, in the fierce battle for Hostomel Airfield about 30 miles outside the capital city of Kyiv. A second general is reported to have fallen to sniper fire one week later, near Kharkiv. 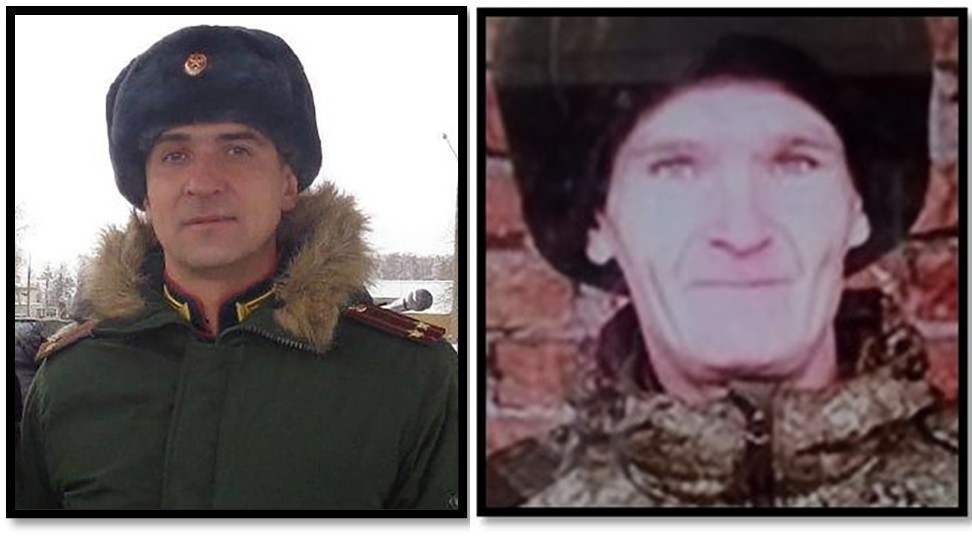 On May 11, 2022, in a major offensive attempting to cross the Siverskyi Donets River near the village of Dronivka, Ukraine, the Russian 74th Motorized Rifle Brigade encountered an overwhelming Ukrainian ambush by the 30th Mechanized Brigade. Four hundred and eighty-five Russian soldiers (another source quoted an estimated 1,000 casualties) from two entire battalions were killed or wounded, and 80 armored vehicles were destroyed in the process. Among the dead were Russian Colonel Denis Kozlov, age 40, and Senior Sergeant Sergei I. Tsarkov, age 38, the commander of a company of Russian snipers and a regular winner of international sniper contests at military games held between ex-Soviet countries.

He was said to be legendary, one of the Russian Army’s deadliest snipers. One of Tsarkov’s comrades told the Chita news service that, “He was the best sniper in the brigade. Everyone respected him very much. He was a professional and enjoyed authority. No one could believe that this could happen to him.”

Denis Kozlov was the 43rd Russian colonel to be killed in action, a staggering figure. But that’s an unfortunate consequence of their overly centralized command-and-control structure, in which full colonels – or sometimes generals – must drive to the front lines to make even the smallest, tactical decisions that American sergeants are permitted to make in combat, thus exposing themselves unnecessarily to frontline, sniper fire.

Ironically, the world’s greatest, female sniper was Lyudmila Pavlichenko, age 25, known as “Lady Death,” in World War Two. She was a Ukrainian-born Soviet soldier in the Red Army with 309 confirmed kills against German troops in Odessa and Sevastopol, mostly using the Tokarev SVT-40 rifle with a 3.5X scope. She was awarded the Gold Star of the Hero of the Soviet Union medal, their highest decoration for bravery.

Since the Russian-Ukraine War began in 2014, other female snipers have risen to fame, including Anastasia Slobodyanyuk, known as “Snow White” – age 26, a pro-Russian separatist militia sniper from Crimea, renowned for her “exceptional courage.” She was killed by a Ukrainian sniper near Donetsk in October 2017. 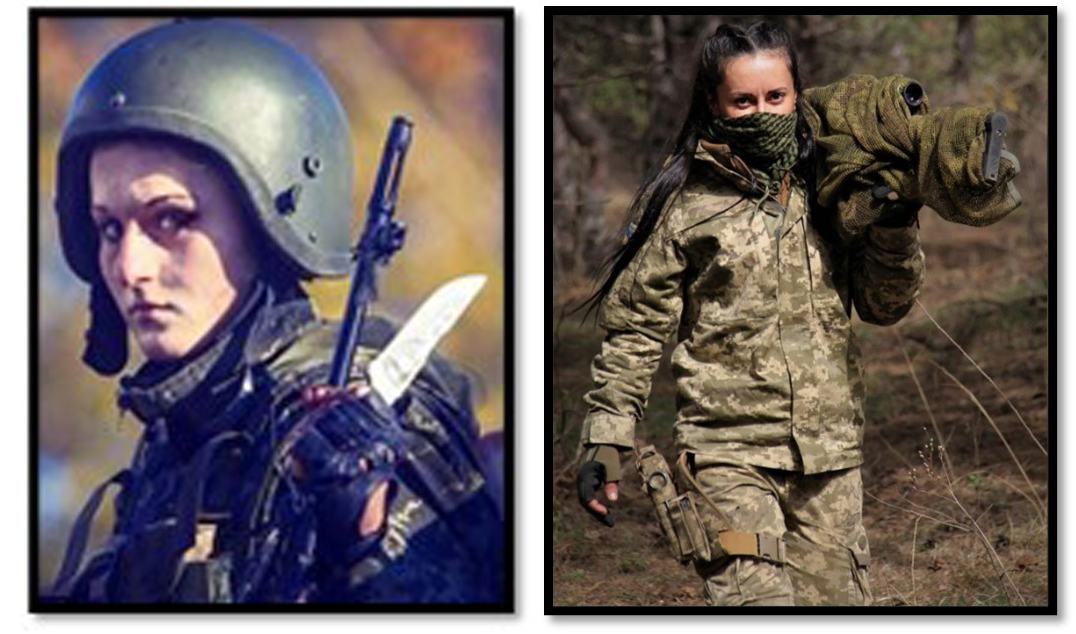 In late March 2022, Russian female sniper Irina Starikova, age 41, known as “Bagira” or “Bagheer” from the black panther in Rudyard Kipling’s The Jungle Book, was captured by Ukrainian forces. She had more than 40 confirmed kills to her credit after being wounded and intentionally left behind by her Russian comrades.

Meanwhile, an outspoken Ukrainian woman sniper known only by her codename of “Ugoliok” (“Charcoal”)’ has been hailed as a national hero lately as a former, Ukrainian Marine who joined in 2017, served a few years, saw combat action in the Donbas region, got out of the military, and then rejoined again, right after the Russian invasion of 2022. She has stated of the Russians that, “These are not people. The Nazis were not as vile as these orcs (An orc is a fictional, humanoid monster, brought into modern usage through films like The Lord of the Rings.) We must take them all out…We will definitely win. Personally, I will stand to the last!” Of course, Ukraine’s multitude of male snipers are making amazing contributions to the war effort, as well, but it always seems to be the women who get the most publicity.

In the long run, Ukraine is still fighting a savage, modern war for its very existence, and every imaginable and available, sniper weapon is being pressed into service. Even civilians have begun arming themselves with high-powered, hunting rifles, especially after the Russian atrocities in Bucha and other Ukrainian towns, in which innocent civilians have been captured and summarily executed.

Sniper warfare there is helping to turn the tide of battle, and the recent death of Russia’s top sniper, Sergei Tsarkov, in battle was certainly a psychological and morale victory for the Ukrainians. One cannot help but cheer them on, as the clear underdogs in a deadly and unevenly-matched conflict, and they’ll certainly need every ounce of strength, courage, determination, and resolve to see this war through to the bitter end, with the help of their vast variety of sniper rifles, both old and new, local and imported, as the world watches with breathless anticipation.