a smaller case, to provide big benefits for concealed carry.”

It’s not very often that an all-new pistol cartridge is created, especially in the concealed-carry category. The latest offering on the market is the Federal .30 Super Carry (.30 SC, technically measuring 8x21mm), which bridges the power gap between the popular .380 ACP (9x17mm), and the more-effective, 9x19mm Luger cartridge. While the .380 ACP is known for its compact size and modest recoil, it’s still a marginal, self-defense load, lacking somewhat in chamber pressure and target penetration, and it usually fails to reach the desired, 12-inch depth recommended by FBI protocols. The 9mm Luger is more powerful and effective, but with snappier recoil, and typically requires a larger firearm.

The challenge was to devise a new cartridge with nearly the same ballistic performance as a 9mm round, but in a smaller, concealed-carry package. At first glance, the new .30 Super Carry clearly resembles a straight-walled, .30 Carbine (7.62x33mm) cartridge, which is a combat-proven round from about 1942 to 1972 used in various wars. It has a brass casing cut back by 12mm, or 36 percent, with .312-caliber (8mm) bullets (versus .308 in the .30 Carbine) of a similar weight, ranging from 100 to 115 grains (or 110 grains in the .30 Carbine.) The overall length of the new cartridge is 1.169 inch, which is exactly the same length as a standard 9x19mm round, designed to readily fit into 9mm-sized pistols or magazines, and only slightly longer than a .380 ACP cartridge.

Marketed primarily toward the public, not military or police organizations, the .30 Super Carry is specifically designed for smaller, concealed-carry weapons. The concept is to provide 9mm-level performance, with less recoil and more rounds in the magazine. Thinner cartridges means that a typical, 10-round magazine for a 9mm pistol will hold 12 rounds of .30 Super Carry. Federal calls the .30 SC, “The most revolutionary advancement in self-defense history in almost 100 years,” which is a very bold claim. 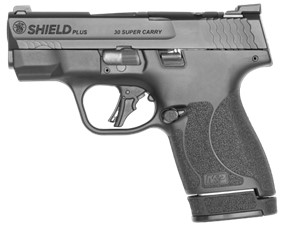 Obviously, the new .30 SC is not quite as powerful as a 9mm pistol, but that comparison is really not the point, since it’s not competing with the 9mm. What’s truly important is that it’s a definite step up from the .380 ACP, .32 ACP, .25 ACP, or .22 LR for self-defense, pushing the limits of 9mm performance in a cartridge more suitable for smaller, pocket pistols. So, whether it’s a good idea or not, depends upon your perspective.

Personally, I own a Glock .45 ACP pistol for very serious situations, a compact, Ruger 9mm for concealed carry much of the year, and a tiny, Ruger LCP II in .22 LR for the hot, summer months, when concealability under a t-shirt and shorts becomes a problem. The LCP II is a great size in either .22 LR or .380 ACP, but I’d love to have one in .30 SC, strictly due to the firepower-vs.-size ratio. Compared to the same-sized handgun, it hits much harder and faster than a .380 ACP, period!

But the loading is so new that it may not work in every .380 pistol. For example, the classic, Walter PPK in .380 is a very simple, straight-blowback design; some wonder if the zippy, .30 SC cartridge is too hot for that type of operation? No one appears to know yet. Furthermore, if a standard-pressure (50,000 psi), .30 SC round generates a fiery muzzle velocity of 1,250 fps, which is considered +P territory for a 9mm cartridge (35,000 psi standard, or 38,500 psi for +P), then what is the growth potential into the +P arena for .30 SC loads, and how hot will they be? Those are more unanswered questions, so far.

Police statistics show that the average, civilian gunfight occurs at approximately 10:35 PM, in nighttime lighting conditions, at a range of seven feet, and four to five shots are typically fired, of which only one usually hits someone due to extreme stress and poor visibility. For those who carry very small, concealed handguns in .22 LR, .25 ACP, .32 ACP, or .380 ACP, the new .30 SC round very clearly offers higher magazine capacity than a .380 ACP, and greater stopping power, almost at 9mm levels, than any of the above choices. And that’s really the primary consideration: pocket-pistol power!