“We sell the finest supercars in the world.  Here’s what they have to say

about us: ‘The speeds this thing can hit are immense, which is what happens

when you have a car that weighs around 2,700 pounds and has about The basic, Glickenhaus 008 model is actually a bone-stock, kit car, normally sold without the engine. The SCG website specifically states, “The 008 Package is not a car. The package contains all (necessary) components…but does NOT contain an engine, gearbox, or wheels and tires…The package will come with assembly instructions to help you build the components into a rolling chassis. You must choose your own engine and install the engine yourself…registered for road use in the U.S.  as a ‘home-built’ vehicle.” The price of this basic package is $99,995.

Glickenhaus says, “Transforming a pile of parts into a car with your own hands, a few tools, and some friends is an incredible adventure. Driving down the road or at the Baja, in a vehicle you built yourself is a riot!”

The Fast-Response, Military Vehicle (probably in the $350k range) is painted matte green, with super-bright, LED lights, an off-road light bar, and a front winch. Depending upon customer specifications, bulletproof glass and armored panels may be an option. 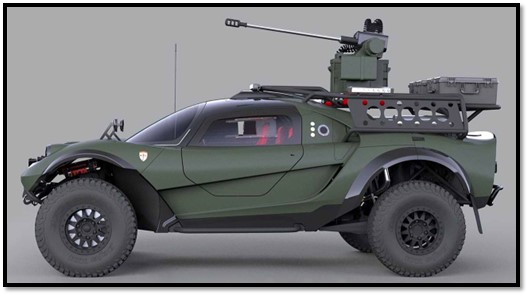 The Glickenhaus 008 Fast-Response, Military Vehicle concept car shown above is depicted with a notional, roof-mounted, remote-control (RC) cannon, which closely resembles the new, British-made, AEI  Systems, Ltd., Venom LR (Low-Recoil), 30mm cannon. But the stainless-steel barrel in the photos is too thin, and the twin recoil buffers are missing, so this appears to be a representative, RC weapon, simply to display the military character of this off-road supercar! Glickenhaus has also revealed that they have fire-department and law-enforcement versions expected to follow behind this amazing vehicle in the near future. While it remains to be seen if there are any actual orders, this is an exceptional technology demonstrator for ultra-modern, fast-attack vehicles!

Warren Gray is a retired, U.S. Air Force intelligence officer with experience in joint special operations and counterterrorism. He served in Europe and the Middle East, earned Air Force and Navy parachutist wings, four college degrees, and was a distinguished graduate of the Air Force Intelligence Operations Specialist Course, and the USAF Combat Targeting School. He is currently a published author, historian, sports car enthusiast, and hunter. You may visit his web site at: warrengray54.vistaprintdigital.com.