surveillance, and reconnaissance roles…to a true,

hunter-killer role with the Reaper.”

“Of course it’s a violation of international law;

that’s why it’s a covert action!”

On Sunday, July 31, 2022, at 6:18 AM local time, a CIA-operated, General Atomics, MQ-9A Block 5 ER (Extended Range), Reaper attack drone was orbiting over the affluent Sherpur District of Kabul, Afghanistan. Doctor Ayman Al-Zawahiri, age 71, an Egyptian-born surgeon, and the current leader of the dreaded, al-Qa’ida terrorist group since the death of Osama bin Laden on May 2, 2011, simultaneously stepped onto the balcony of his safe house one hour and 15 minutes after official sunrise. He sat down as was his recent custom. The secret drone then reportedly fired two AGM-114R9X laser-guided, Hellfire II missiles. These missiles were a special variant with no warhead but six razor-sharp, pop-out blades, instead of explosives, to limit collateral damage. Al-Zawahiri was killed instantly.

After the disastrous, U.S. exit from Afghanistan only one year before, the victorious, Taliban rebels agreed not to provide a safe-haven for individuals involved with al-Qa’ida or other terrorist organizations. In return, the U.S. agreed to only conduct military operations in Afghanistan with the consent of the Taliban government. U.S. officials called Al-Zawahiri’s presence in Afghanistan a violation of the Doha Agreement.

President Joe Biden on August 20, 2021, stated, “What interest do we have in Afghanistan at this point, with al-Qa’ida gone? We went to Afghanistan for the express purpose of getting rid of al-Qa’ida in Afghanistan, as well as — as well as getting Osama bin Laden. And we did.” Then, on July 25, 2022, Biden finally approved the secret assassination of Ayman al-Zawahiri, the man who he’d previously said was “gone.” 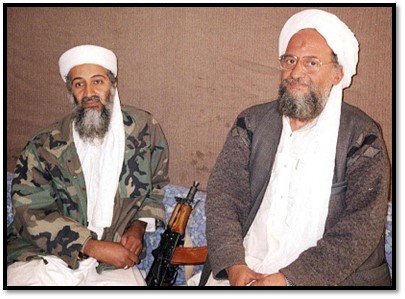 The Reaper drones were likely based at Ain al-Asad Air Base, Iraq, 1,530 miles from downtown Kabul. The latest, GoogleEarth satellite imagery, dated June 26, 2019, very clearly shows two gray, MQ-9A, Reaper drones parked near the north side of the airfield. So, we know that they operate from al-Asad, and the CIA drone assassination of Iranian Qods Force commander, Major General Qasem Soleimani, on January 3, 2020, was carried out from Ain al-Asad at Baghdad International Airport, using a different weapon: the AGM-179A Joint Air-to-Ground Missile (JAGM), a new successor to the Hellfire series. But in the crowded streets of Kabul, the quiet, innovative, AGM-114R9X missile was a much better choice. An Extended-Range Reaper with two external fuel tanks can fly for up to 35 hours at a cruising speed of 230 miles per hour, easily covering thousands of miles to its target area, and then back home again. 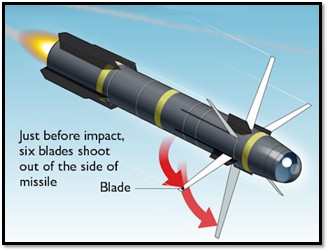 The R9X Hellfire II, also called the “Ninja Bomb” or the “Flying Ginsu,” travels at Mach 1.3 in level flight, or at least Mach 1.5 in a dive. It is about five feet long, and weighs 100 pounds, with a range of up to 6.8 miles. So, it’s a kinetic-kill weapon, accurate to within less than one foot on the ground, and therefore, can target individual terrorists with great precision. In Al-Zawahiri’s case, it was like dropping two rocket-assisted, 100-pound meteors full of protruding swords blades at least a foot long, onto his body at supersonic speed from above, probably unseen and unheard – until it was too late to try moving away.

An MQ-9A Block 5 ER Reaper with two external fuel tanks carries four Hellfire missiles, but in this case, two were more than sufficient to eliminate the target. Therefore, no civilian casualties occurred in the Al-Zawahiri incident. This was not the first time that the R9X missile was used, however. In 2017, the United States fired an R9X missile at Abu Khayr al-Masri, a senior al-Qa’ida leader in Syria. In 2019, another R9X was used against Jamal Ahmad Mohammad Al-Badawi, the mastermind behind the USS Cole bombing, killing him in Yemen where he was hiding. Also, an R9X was reportedly used in the 2020 killing of a local, al-Qa’ida leader in Syria. Estimates on the number of strikes carried out with this new missile range from six to 10 times.

The Al-Zawahiri assassination is the first drone attack since American forces departed chaotically from Afghanistan last year. It was against a safe house owned by a top-aide to terrorist leader Sirajuddin Haqqani. President Biden later stated in a televised address that, “Justice has been delivered. And this terrorist leader is no more. No matter how long it takes, no matter where you hide, if you are a threat to our people, the United States will find you and take you out.”

Warren Gray is a retired, U.S. Air Force intelligence officer with experience in joint special operations and counterterrorism. He served in Europe and Southwest Asia, earned Air Force and Navy parachutist wings, four college degrees, and was a distinguished graduate of the Air Force Intelligence Operations Specialist Course, and the USAF Combat Targeting School. He is currently a published author, historian, and hunter. You may visit his web site at: warrengray54.vistaprintdigital.com.