“The Ruger LC9s is a sweet shooter…because it shoots more

instinctively and accurately than most compact-sized handguns…

mainly attributed to its trigger…The performance of the LC9s

LC9s is actually one of the best carry handguns

In December 2014, Ruger Firearms introduced their new LC9s (lightweight, compact, 9mm, striker-fired) pistol, including the LC9s Pro (professional) model, which were both significant improvements over the previous LC9 model from 2012. They incorporated a striker-fired system in place of the hammer-fired LC9, which allowed for a much smoother trigger pull. The LC9s Pro is exactly like the basic LC9s version, except that the manual thumb safety and magazine-disconnect device (which Chris Baker of Lucky Gunner called “obtrusive and unnecessary”) are removed for faster, more-efficient operation in extreme self-defense situations. These changes do not make the LC9s Pro any more “unsafe” than any standard Glock pistol, none of which are equipped with external safeties or magazine-disconnect devices. So, this is really not a problem at all. Like any Glock, the trigger mechanism itself has an integral safety device, so the handguns are perfectly “safe” for any competent user.

This may be another matter entirely for novices, or those who are afraid of firearms, so this should definitely not be your first handgun. The last time that I had to qualify with the 9mm Beretta M9 pistol in the Air Force, the man in the adjacent position at the shooting range was an Air Force lawyer who was terrified of guns in general. His hands were constantly shaking throughout the entire qualification process, which was mercifully short. I felt very lucky not to be accidentally shot by this individual, but pistol qualification was mandatory for all officers. So,  he had to be there, and I’m still  alive.

The LC9s Pro is very clearly designed for concealed-carry self-defense purposes, with sleek, clean, snag-free lines; a thin, lightweight, glass-filled, nylon frame; and an ultra-short barrel for a 9mm pistol. This author has previously owned and carried a Walther PPK/S, Ruger LCP, LCP Custom, and LCP II, all in .380 ACP, and made the inevitable comparisons to the smaller Walther PPK in .380 as well as other compact 9mm handguns such as the Walther PPS M2 and Glock 43. But, the LC9s Pro still wins by any standard, and here’s why:

First of all, the .380 ACP cartridge is a marginal manstopper at best, and the LCP models cannot use +P ammunition to enhance that power level at all. So, moving up to a very small 9mm handgun, which can accept 9mm +P ammo, is a define step in the right direction. The LCPs, although quite concealable, lightweight, and diminutive in overall size, simply lacked the decisive stopping power for a serious self-defense weapon.

Moving on to the classic, steel-framed Walther PPK and PPK/S, still in .380 ACP – both can accept +P ammunition. However, the simple, straight-blowback design makes the recoil a bit harsh, snappy, and hard on the frame, and both of these guns are longer, wider, and heavier than the more-powerful Ruger LC9s Pro. They have longer barrels, fixed sights, and in the PPK, fewer rounds of ammunition available.

Now it comes down to a comparison between high-quality compact 9mm pistols such as the Walther PPS M2 and Glock 43. The Ruger is still shorter, thinner, and lighter than either model, with a shorter barrel and larger magazine capacity than the Glock. So, really, all of the competition quickly falls by the wayside in a side-by-side comparison. There’s nothing else quite like the Ruger LC9s Pro for its intended purpose.

Its specifications tell the story succinctly: This amazing pistol is only six inches long by .9-inch wide (about as thin as any handgun in existence) with a 3.12-inch barrel and weighing just 17.2 ounces with an empty, single-stack magazine in place. The magazine holds seven rounds of 9mm Luger ammunition, and +P loads can be safely fired. While most other handguns of this size utilize tiny fixed sights, the LC9s Pro has highly-visible, drift-adjustable, three-dot (white dots) sights for rapid target acquisition, even under low-light conditions, easily adjustable by knocking them inside the dovetail fitting.

The Ruger LC9s Pro also incorporates a polished feed ramp for “impeccable functioning,” even with hollowpoint ammunition, and a low bore axis and heavy recoil spring to help mitigate recoil in this tiny powerhouse of a handgun.

Trigger pull is superb (some say incredible), long and smooth, breaking cleanly and crisply at a very light 4.85 to 5.2 pounds. It has been praised as “the best trigger of any pistol in its class.” Daniel English of The Truth About Guns wrote that, “Overall, the LC9s Pro is impressive, and a definite step up from its predecessors…The trigger on the LC9s Pro is a night-and-day difference from the trigger in the original LC9…the accuracy of the LC9s Pro is more than sufficient for its intended usage…extremely accurate at a distance of 10 to 15 yards.” He rated it five stars out of five for concealability, reliability, and overall performance.

Justin Opinion (a catchy pseudonym, not his real name) wrote for GunsAmerica.com on February 28, 2018, that, “The LC9s Pro can often go where other guns cannot…Because this pistol is slim, short, and light, it makes it one that you can carry…it has demonstrated itself to be reliable, durable, and accurate…The trigger on the LC9s Pro is light and crisp, with a fairly long stroke…When I say the trigger is light, I mean really light…And if you don’t think that extra round per magazine makes a difference, then you’re not reading enough after-action reports about shootings. You want all you can get…The LC9s Pro makes a great balance between easy concealment and adequate capacity. A good-quality, Kydex holster adds almost no thickness.”

This is where Ruger Firearms stepped into the picture, teaming up with Fobus Holsters to produce the ultra-thin, ultra-lightweight, Fobus/Ruger RU-2 ND polymer holster with a tension-adjustment screw. It weighs next to nothing and takes up very little space on your belt or waistband. 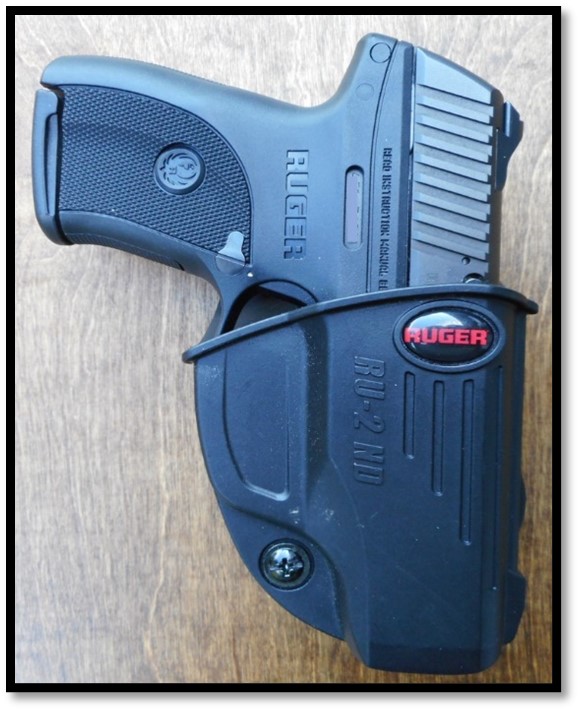 My own experience with the Ruger LC9s Pro (mine is a 2018 model, costing only $306 brand new at the time plus $47 for the Fobus holster) has been exactly as these other writers described. It’s lightweight, compact, super-reliable, concealable, inexpensive, powerful, and so much more.

On October 28, 2019, Gunpowder Magazine published my article entitled, “Does the 9mm Luger Offer Effective Stopping Power?” At that time, I tested five different, popular, hollowpoint, self-defense loads from my Ruger LC9s Pro in wet modeling clay to simulate the effects of terminal performance during a shooting incident. These were as follows:

The Barnes TAC-XPD solid-copper bullet yielded a muzzle velocity of 1,043 feet per second (fps), penetrated 12.3 inches, and expanded to .707-caliber, with a temporary cavity 3.2 inches wide, which are ideal parameters for a self-defense load.

The CorBon DPX copper bullet was a real speed demon, at 1,300 fps (Mach 1.15), penetrating to 15.2 inches while fragmenting violently and leaving a .373-caliber base, while creating a temporary cavity 3.75 inches wide. It’s blazingly fast, but might tend to overpenetrate and hit an innocent bystander.

The Defender ammunition, with a traditional jacketed hollowpoint (JHP) logged a modest, muzzle velocity of 1,060 fps, penetrated very deeply to 16.5 inches, expanded to .765-caliber, and left a 4.4-inch-wide cavity in its wake. The performance was truly impressive, but this is another overpenetrator, which I can’t recommend.

The Federal HST cartridge uses a heavy, 150-grain bullet, and HST ammunition is very widely used by police agencies nationwide. Muzzle velocity is chugging along like a slow freight train at 888 fps, and it penetrated to 11.9 inches, expanded to .711-caliber, and its temporary cavity was 3.5 inches wide.

Finally, the new Norma MHP is another solid-copper, hollowpoint (SCHP) round, advertised as “The most-expanding, 9mm bullet in the world.” Muzzle velocity is a fairly tame 1,031 fps, and it penetrated 9.5 inches (equivalent to 10.5 inches in ballistic gelatin) and expanded to .937-caliber! Wow!!!

This bullet certainly lived up to the manufacturer’s claim as “the most-expanding, 9mm bullet in the world.” It’s definitely not hype. Penetration was less than any of the other tested rounds, but quite adequate for hitting vital organs from almost any angle, and its spectacular, temporary wound cavity was about the size of both of my fists (from the wrist bones forward) touching each other. Truly impressive!

In conclusion, they were all decent, reliable loads, but in a confrontational scenario where you must decisively stop an armed assailant with just one shot from a 9mm pistol, literally trusting your life to that single bullet, without overpenetrating and hitting an innocent bystander, the new Norma MHP round stands out as a clearly decisive fight-stopper. Its penetration depth of 9.5 to 10.5 inches meets the desired level, and it is more than compensated for by its devastating expansion and permanent wound cavity, drilling a ragged hole nearly an inch wide by 10 inches deep into your assailant.

The more-traditional Barnes TAC-XPD penetrates slightly deeper and performs very consistently, making it my second choice (in my spare magazine) among the five tested. The clay block tests proved that the very light and very heavy loads were less consistent and reliable than the “standard,” hollowpoint, design weights of 108 to 115 grains. So, if one solid hit on a dark night is all you get for self-defense on average, then I’ll trust my life to the Norma MHP or Barnes TAC-XPD every time, because now I know exactly how they’ll perform.

Overall, the superb, Ruger LC9s Pro pistol and Norma MHP ammuntion are an unbeatable combination in defensive scenarios. To paraphrase and update from an earlier quote by noted gun writer Jeff Cooper, “Any situation that I can’t handle with eight rounds of (9mm Norma MHP), is a situation that I just can’t handle.” The Ruger LC9s Pro beats the competition in virtually every category of comparison, as an extremely small, lightweight, concealable, accurate, reliable, and powerful handgun for protecting my life in dangerous situations. It’s really nothing short of compact perfection.

The Latest in Armed Self-Defense News