“The tactic used by the Ukrainian (Mi-24) pilots is pretty clear:

Russian Aerospace Forces’ radars until they have reached the

target area, where they have used what appears to be S-8

unguided rockets, before egressing the area at low level.”

The Russian Federation has aggressively employed its Mi-24/35M1 Hind-E/F helicopter gunships, its Mi-28N Havoc-Bs, and its Ka-52 Hokum-B/Alligators during the ongoing invasion of Ukraine. They have lost 21 helicopters so far to Ukrainian combat action. The Ukrainian Army Aviation Service has been fighting back with its own fleet of Mi-24 Hinds. (See my Gunpowder Magazine article on “‘Satan’s Chariot’: The Mi-24 Hind Gunship” from September 10, 2020.)

At the beginning of the 2022 invasion, they had 34 Hinds remaining in service, also known to its pilots as the “Flying Tank” or the Krokodil (“Crocodile”), while Afghan insurgents have respectfully referred to it as Shaitan-Arba (“Satan’s Chariot”). Only one has been confirmed as lost in combat since then, on March 8, 2022 over Kyiv’s eastern suburb of Brovary. The Ukrainian Army inventory consists primarily of Mi-24V Hind-E (with .50-caliber Gatling gun) and Mi-24P Hind-F (with a twin-barrel, 30mm cannon) models with smaller numbers of Mi-24VP (armed with a twin-barrel, 23mm cannon in the chin turret) Hind-E Modified gunships and eight or nine older Mi-24K/R Hind-G1/G2 reconnaissance variants. Those have been stripped of their special equipment and retrofitted with weapons.

The Hind-E/F attack helicopter is a long, sleek, heavily armed gunship that was introduced in the 1970s and rose to prominence during the Soviet-Afghan War of 1979 to 1989 where it was the most-feared helicopter in the world at that time. It has tandem cockpits for the pilot (in back) and weapon systems officer/gunner (in front) with bubble canopies; a passenger compartment (usually empty) for up to eight armed soldiers; twin, overhead, turbine engines; a five-blade main rotor assembly; and a three-blade tail rotor.

Considerable attention was paid to making it fast, including retracting tricycle landing gear to reduce drag. At high speeds, the small stub wings provide one-quarter of the total lift of the aircraft. The Mi-24 fuselage is heavily-armored with titanium tubs around both cockpits and beneath the passenger-cabin floor. It also has titanium rotor blades and ballistic-resistant windscreens, all capable of sustaining a direct hit from a .50-caliber machine gun with minimal damage.

The standard weapons load for Ukraine’s deadly “Crocodile” gunships consists of up to four B-8V20 20-round pods loaded with 80mm S-8 unguided rockets, although UPK-23-250 gun pods may be substituted. Each carries a twin-barrel GSh-23L 23mm cannon with 250 rounds of ammunition. Bomb loads may include up to 10 220-pound iron bombs or four larger bombs for hitting hardened targets. Finally, either four or eight radio-command-guided, tube-launched, supersonic 9K114 Shturm (“Storm,” or AT-6B/C Spiral, in NATO terminology) anti-tank missiles are carried on the outboard wing stations.

The Mi-24V Hind-E, introduced in 1976, mounts a rapid-fire four-barrel Yakushev-Borzov Yak-B 12.7mm (.50-caliber) Gatling gun in a rotating chin turret. It has 1,470 rounds of ammunition aimed by the gunner’s monocular helmet-mounted sight (HMS) and display system. The export version is designated the Mi-35 Monsoon.

The subsequent Mi-24P (“P” for Pushka, meaning “Cannon”) Hind-F model entered production in 1981 and replaced the nose-mounted Gatling gun turret with a fixed twin-barrel 30mm GSh-30-2K autocannon on the right side of the cockpit area. It is otherwise unchanged from the Hind-E. The powerful, 30x165mm weapon is quite heavy and carries only 750 rounds of ammunition with bone-jarring recoil. 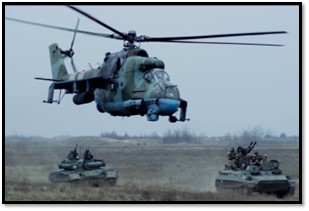 In 1989, the Mi-24VP Hind-E Modified was created, which was essentially a standard Hind-E. However, the small Gatling gun was replaced by a GSh-23L twin-barrel 23mm cannon in the nose with 450 rounds of ammunition. Ukraine has at least a few of these in their assault helicopter inventory.

Ukrainian “Crocodile” aircrews wear the locally produced, full-sized Fort-14TP service pistol in 9x18mm Makarov with a 4.84-inch barrel and 16+1 rounds of ammunition on their survival vests. This has been the standard issue handgun of Ukrainian forces since 2014.

In addition, Russian Hind crews, and probably Ukrainians as well, typically carry the short, ultra-compact AKS-74U carbine. It is also favored by tank crews and SpetsNaz commandos in combat situations, shoved down beside their cockpit seats or across their chests as a personal-defense/survival weapon in case they are shot down in battle.

The AKS-74U, in service since 1979, is a six-pound weapon with an 8.1-inch barrel measuring only 19.7 inches long with the side-folding stock folded. It uses 30-round magazines of 5.45x39mm ammunition. Kalashnikov has recently produced ultra-compact AM-17 carbines to eventually replace the handy AKS-74U, but they have not yet been fielded in significant numbers. So, the older, combat-proven design continues to soldier on, even 28 years after production officially ended. 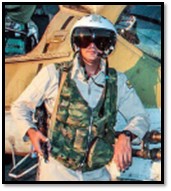 Russian Mi-24P Hind-F pilot in Syria, with AKS-74U carbine at his side. Photo credit: En.topwar.ru.

On July 20, 2000, this author had the opportunity to inspect and climb aboard an Mi-24V Hind-E of the 87th Bakony (named for the mountainous region) Combat Helicopter Regiment of the Hungarian Land Command at Szentkirályszabadja (I can still pronounce it correctly, even after 22 years) Air Base near Veszprém, Hungary. Despite its age and lack of sophistication by modern standards, the Hind-E was still a potent, impressive, and very deadly machine. This unit was later disbanded in 2004.

Ukrainian “Crocodile” gunships definitely fought in the Battle of Hostomel in late February 2022, supporting a ferocious counter-assault against Russian paratroopers that seized Antonov airport in the suburb of Hostomel, just outside Kyiv, with repeated, rocket attacks.

Then, at 5:00 AM on the morning of Friday, April 1, 2022 (“April Fools’ Day”), a pair of blacked-out Ukrainian Mi-24 attack helicopters (probably upgraded Mi-24PU-1 models, flying from Kharkiv) attacked a large oil-storage facility in Belgorod, Russia, 24 miles north of the Ukrainian border and 50 miles from Kharkiv, at very low altitude, firing salvoes of 80mm rockets and resulting in huge, impressive explosions from at least eight oil storage tanks. Only two Russians were injured, and no one was killed. 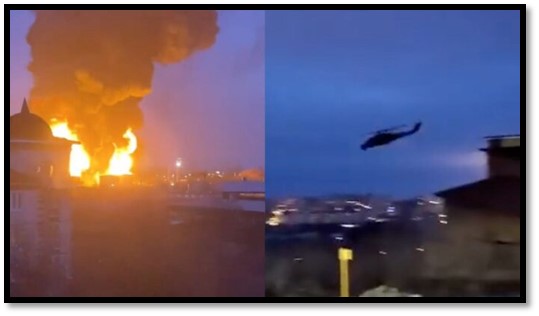 This was an extremely daring and risky raid into heavily defended Russian airspace, a significant achievement by any standard, disrupting enemy fuel supplies and highly embarrassing the Russian armed forces and their air defense network.

Italian aviation expert David Cenciotti wrote on his web site, The Aviationist, that same day that, “The tactic used by the Ukrainian (Mi-24) pilots is pretty clear: they have flown at ultra-low level to avoid detection by the Russian Aerospace Forces’ radars until they have reached the target area, where they have used what appears to be S-8 unguided rockets before egressing the area at low level.” American journalist Tyler Rogoway at The War Zone added that, “The strike could serve as a major rallying cry for all Ukrainians…executed by Ukrainian forces, it showcases the bravery of their aircrews and represents the underdog taking the fight to the enemy.”

Interestingly enough, Vyacheslav Gladkov, the governor of the Belgorod region, wrote accurately that, “There was a fire at the petrol depot because of an airstrike carried out by two Ukrainian army helicopters (that) entered Russian territory at a low altitude.”

But the Ukrainian government swiftly disavowed any responsibility for the incredibly daring pre-dawn attack, possibly to avoid escalation of the conflict, with Deputy Prime Minister Iryna Vereshchuk stating that, “It’s another example of the typical neglect of safety protocols by the Russians when handling dangerous, World War Two-era ammunition.” In addition, Ukrainian Foreign Minister Dmytro Kuleba said that, “I can neither confirm nor reject the claim that Ukraine was involved in this,” and Colonel Oleksandr Motuzyanyk said that Ukrainian forces were conducting a defensive operation and could not be held responsible for “every catastrophe on Russia’s territory.” So, this Mi-24 raid had all the earmarks of a low-key, plausibly-deniable covert operation.

Most recently, on Thursday, May 26, 2022, the U.S. government officially announced that the Czech Air Force was donating its last remaining Hind gunships (five Mi-24Vs and 10 upgraded Mi-35s) to Ukraine in anticipation of soon receiving four AH-1Z Viper helicopter gunships and eight UH-1Y armed transports as used by the U.S. Navy. With the brutal Russian invasion dragging on and no end in sight, these well-maintained Czech aircraft will certainly be a welcome addition to Ukraine’s vaunted “Crocodile” gunship fleet, boosting its numbers by a substantial 45 percent. 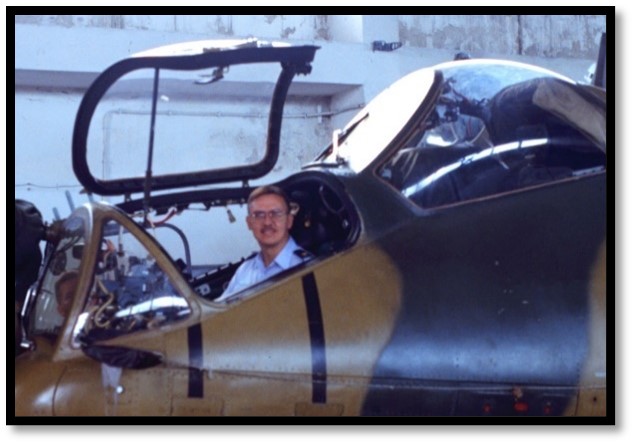 Warren Gray is a retired, U.S. Air Force intelligence officer with experience in joint special operations and counterterrorism. He served in Europe (including Eastern Europe) and the Middle East, earned Air Force and Navy parachutist wings, and four college degrees, including a Master of Aeronautical Science degree, and was a distinguished graduate of the Air Force Intelligence Operations Specialist Course, and the USAF Combat Targeting School. He is currently a published author and historian. You may visit his web site at: warrengray54.vistaprintdigital.com.