a threat they can’t handle. People are so hellbent on shooting

down the stealth fighter that they invariably make mistakes

that I can exploit.”

The General Dynamics GAU-22/A Gatling gun is a unique, one-of-a-kind weapon, designed exclusively for the Lockheed Martin F-35A/B/C Lightning II stealth fighter. This gun is derived from the highly successful, GAU-12/U Equalizer 25x137mm electric Gatling gun. The Equalizer was used aboard the AV-8B Harrier II “jump-jet” fighter, the AC-130U Spooky II aerial gunship (retired since 2019), and the U.S. Marine Corps’ LAV-AD ground-based fighting vehicle (retired since 2003). Redesigned into the GAU-22, the gun has only four barrels instead of five, so it’s 40 pounds lighter (at 230 pounds) and occupies 20-percent less volume than the Equalizer.

The GAU-22 fires the same very-powerful, high-velocity, 25mm ammunition, with a firing rate of 3,300 rounds per minute (55 rounds per second), and is approximately 20-percent more accurate than the GAU-12/U, hitting within a 15-foot circle at 1,000 yards, and with a maximum range of 2.27 miles. It became fully operational on the F-35 stealth fighter with the Block 3F software upgrade in 2019, and a gun system nearly seven feet long.

On the land-based, F-35A fighter, the weapon is mounted inside the left side of the fuselage, above the left air intake duct. Supplied with 180 rounds of ammunition, it has just 3.27 seconds of firing time. The naval, F-35B/C versions carry an external gun pod, beneath the fuselage. Its 220 rounds of ammunition are enough for exactly four seconds of firing time.

The ammunition used is Nammo (Norwegian company) 25mm PGU-47/U APEX (Armor-Piercing, with Explosive), featuring a tungsten-carbide, penetrator tip, and an explosive-fragmentation body, for multi-purpose use against both hardened and soft targets. It also incorporates a clock-working, inertia-driven, mechanical fuze, to protect the round from shocks, misfires, and cookoffs, making it safer to handle and fire. The weapon is typically fired in measured bursts of either 30, 60, or 80 rounds.

This is a versatile, hard-hitting, new weapon is designed primarily for strafing ground-based targets, such as armored vehicles, but it has equal capability and firepower against enemy fighter aircraft in aerial combat. Speaking of aerial combat . . . 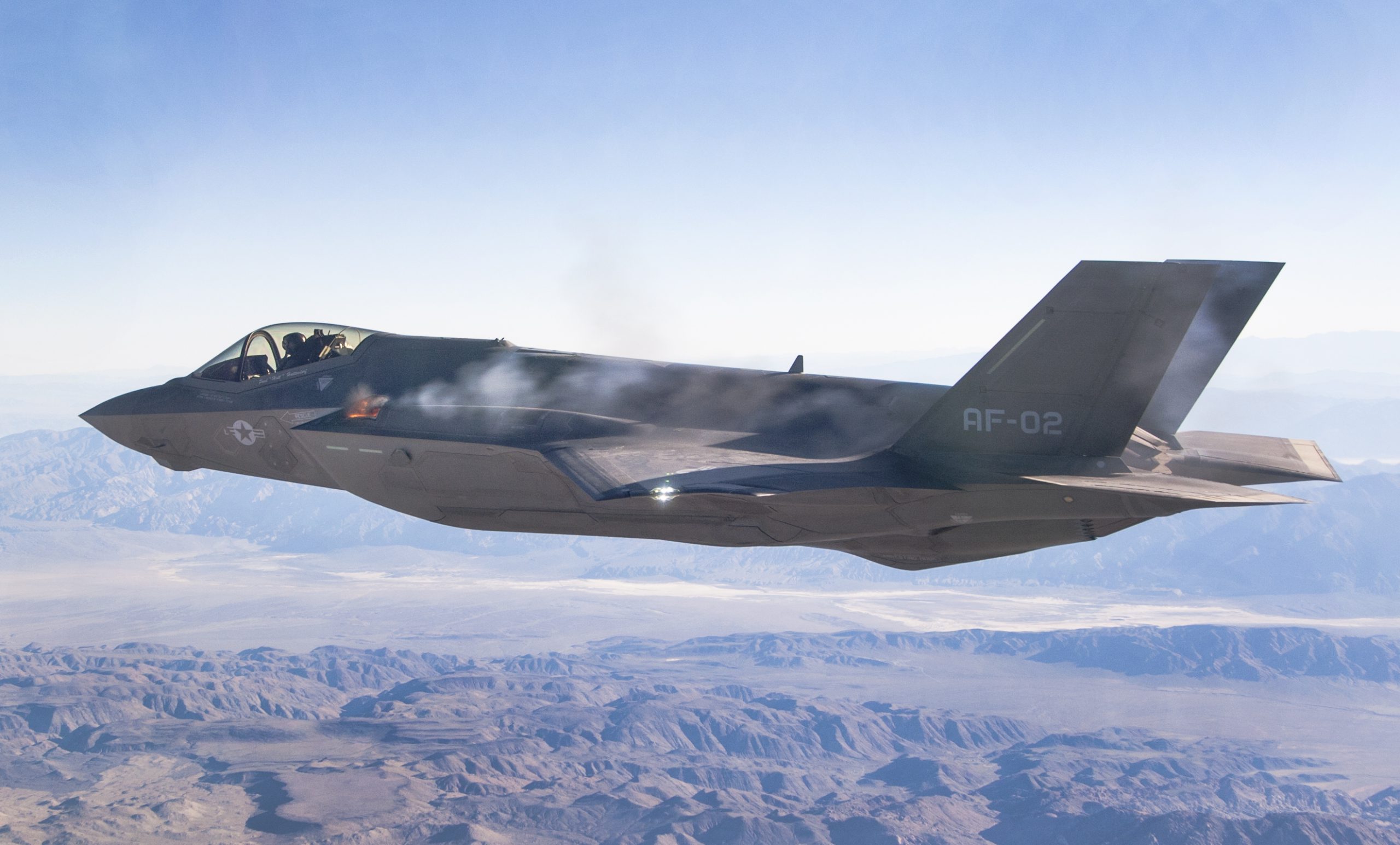 The F-35A/B/C Lightning II stealth fighter is an amazing, single-seat, single-engine, fifth-generation, multirole, combat aircraft. It entered active, military service with the U.S. Marine Corps (F-35B) in July 2015, followed by the U.S. Air Force (F-35A) in August 2016, and the U.S. Navy (F-35C) in February 2019. It has also been delivered to the air forces and/or navies of Australia, Belgium, Denmark, Israel (as the F-35I Adir, or “Mighty”), Italy, Japan, the Netherlands, Norway, Poland, South Korea, Singapore, Switzerland (arriving soon), and United Kingdom. And on December 10, 2021, it was selected as Finland’s next fighter aircraft.

The F-35 is powered by a Pratt and Whitney F135-PW-100 low-bypass, turbofan engine rated at 43,000 pounds’ thrust with afterburning. Its asymmetric, exhaust  nozzle consists of 15 partially-overlapping flaps that create a sawtooth pattern at the trailing edge, which reduces radar signature and creates vortices that reduce the infrared signature of the exhaust plume. A power-module upgrade, introduced in 2017, improves engine thrust by six-to-10 percent, and reduces fuel consumption by five-to-six percent.

This raw power output allows for a top speed of Mach 1.6 with a full, internal payload at high altitude, or approximately Mach 1.0 at sea level. The F-35 has a combat radius of 669 nautical miles on internal fuel only, with a 1,200-nautical-mile range, a maximum flight ceiling of 50,000 feet, and a structural g-limit of 9 gs.

The Lightning II, often nicknamed the “Panther” by U.S. Air Force pilots, differs from the earlier, F-22A Raptor stealth fighter by having just one engine instead of two, and a multirole mission instead of pure, air superiority. It’s intended to replace the F-16CM Fighting Falcon, just as the F-22A replaces the F-15C Eagle, so the new, GAU-22/A cannon is optimized for ground-attack missions with armor-piercing ammunition, as well as for traditional, air-to-air combat. The Lightning is not intended to be a hard-turning dogfighter, although it typically carries two AIM-120C-7 Slammer radar-guided missiles internally, as well as the GAU-22/A gun, for self-defense against hostile fighters. During flight testing, the stealthy aircraft scored a kill ratio of 15-to-one against an F-16CM aggressor squadron in a high-threat environment.

Advanced, composite materials, primarily bismaleimide, composite epoxy materials, and carbon nanotube-reinforced epoxy, comprise 35 percent of the aircraft’s weight, giving it remarkable, stealth characteristics, but at the steep price of $78 million each. The radar cross-section of the Lightning II has been described as lower than a metal golf ball at certain frequencies and angles, and in some conditions, the F-35 compares favorably to the F-22A Raptor in stealth characteristics.

The radar-evading F-35 is equipped with an APG-81 active, electronically-scanned array (AESA) radar. The radar has passive and active modes for either air-to-air combat or ground-attack missions, simultaneously tracking multiple targets as far away as 80 nautical miles. This radar is supported by an AAQ-40 EOTS (Electro-Optical Tracking System), which is essentially a long-range, FLIR sensor for passive, thermal tracking of targets. The aircraft is equipped with fly-by-wire flight controls, a side-stick controller, like the F-16’s, a hands-on-throttle-and-stick (HOTAS) system, and a Martin-Baker US16E ejection seat.

Unfortunately, there is no indication yet that the F-35 is supplied with the new, GAU-5A self-defense weapon for downed pilots. (See my Gunpowder Magazine article on “Arming Air Force Pilots: The GAU-5A Aircrew Self-Defense Weapon” from January 10, 2020.) The GAU-5A was specifically designed to fit inside the standard, U.S. Air Force, ACES II ejection seat, and the F-35’s British Martin-Baker seat does not share the same dimensions. In any event, the pilot will wear either a Beretta M9 or new, SIG M18 pistol on his (or her) survival vest in combat situations for self-defense on the ground.

The F-35 Lightning is defended by the ASQ-239 Barracuda electronic-warfare system, for detecting hostile radars with a radar-warning receiver (RWR), tracking those same threat aircraft, and jamming their radars. In addition, the F-35 pilot wears a $400,000, carbon-fiber, Rockwell Collins Gen. 3 helmet-mounted display system (HMDS). The system interfaces with other aircraft systems to provide flight and combat information on the pilot’s visor, including infrared and night-vision imagery that allows the pilot to “see through” the aircraft body via a network of tiny cameras. This sophisticated, helmet system permits the pilot to simply turn his head in order to launch missiles off-boresight at hostile aircraft far off the fighter’s nose.

There is also an AAQ-37 Distributed Aperture System (DAS), consisting of six infrared sensors to provide all-aspect, missile-launch warning and target tracking, giving the pilot spherical, infrared and night-vision imagery on his helmet visor. An ASQ-242 Communications, Navigation, and Identification (CNI) suite employs a half-dozen physical links to provide sensor fusion, radio-frequency information, and infrared-sensor data to form a single, tactical picture for the pilot. And the cockpit features an Adacel speech-recognition system that responds to the pilot’s voice commands.

This advanced, stealth fighter conducts close-air support (CAS) missions, with a secondary, air-to-air combat role. Typical armament consists of the 25mm GAU-22/A cannon in the left fuselage area, and four internal weapon stations inside the two enclosed, bomb bays. Normally, it will always carry two AIM-120C-7 Slammer missiles for self-defense, with a range of up to 64 nautical miles.

For overt, combat situations not requiring stealth capabilities, six additional weapon stations may be mounted beneath the wings, carrying AIM-9X-2 Super Sidewinder heat-seeking missiles, and/or any of the weapons mentioned above.

In the United States alone, F-35s are currently based in Alabama, Alaska, Arizona, California, Florida, Nevada, South Carolina, Utah, Vermont, and Wisconsin. The first overseas unit is the 495th Fighter Squadron (“Valkyries”) at RAF Lakenheath, England, with their first four fighters arrived on December 15, 2021. They are soon to be supplemented by the 493rd Fighter Squadron (“Grim Reapers”), also at RAF Lakenheath, for a total of 48 Lightning IIs stationed permanently in the United Kingdom. The U.S. plans to purchase 2,456 F-35s through 2044, and the stealth aircraft is projected to operate until at least 2070.

The F-35 was first used in combat by the Israeli Air Force on January 12-13, 2017, when three of them attacked Mezzeh Air Base in Damascus, Syria. Then, in July 2018, at least three Israeli F-35s flew a test mission directly to Tehran, Iran, and back to Israel again, just to demonstrate their ability to attack Iran with impunity, should the need ever arise. While this audacious sortie remains publicly unconfirmed, Iran’s Supreme Leader Ali Khamenei reportedly fired the chief of the Iranian Air Force (who was, in fact, replaced by an F-14A Tomcat pilot in August 2018) and commander of the Islamic Revolutionary Guards Corps (actually replaced in April 2019) over the dramatic incident.

Its first combat action by the U.S. Marine Corps (F-35B) was on September 27, 2018, against a Taliban target in Afghanistan, and by the U.S. Air Force (F-35A) on April 27, 2019, against an ISIS tunnel network in northern Iraq. The British Royal Air Force employed F-35s in battle for the first time on June 25, 2019, on armed reconnaissance flights over Iraq and Syria.

In conclusion, the highly-sophisticated, F-35A/B/C Lightning II stealth fighter and GAU-22/A Gatling gun combination demonstrates the current state of the art in air combat technology, with iconic, fire-breathing, multi-barrel Gatling guns still equipping our very latest aircraft, designed to instill fear in the enemy and maximize hit probability against moving targets in the air or on the ground. The need for such highly-efficient weapons of war remains undiminished over time.

Warren Gray is a retired, U.S. Air Force intelligence officer with experience in joint special operations and counterterrorism. He served in Europe (with two fighter squadrons in Germany) and the Middle East, earned Air Force and Navy parachutist wings, and four college degrees, including a Master of Aeronautical Science degree, and was a distinguished graduate of the Air Force Intelligence Operations Specialist Course, and the USAF Combat Targeting School. He is currently a published author and historian. You may visit his web site at: warrengray54.vistaprintdigital.com.

The HK437 Carbine for Special Forces