Two weapons hung on the bulletproof vest, and a third, the

HK416 assault ‎‎rifle, carried in the cabin. Just in case.”

The picturesque French city of Pau (pronounced “Po”), at the foot of the majestic, snow-capped, Pyrénées Mountains, just 30 miles from the Spanish border and 57 miles inland from Bayonne and Biarritz on the Atlantic coast, is home for the 4e Régiment d’Hélicoptères des Forces Spéciales (4e RHFS) or 4th Special Forces Helicopter Regiment of the French Army Light Aviation (ALAT) service. It is under the operational control of the French Special Operations Command (COS) and Army Special Forces Command (BFST.) This elite army aviation regiment, created in 1993 with the motto of “Nowhere Without Us,” consists of six special operations squadrons (EOSs):

EOS 1 is equipped with 10 AS532UL Cougar utility transports and two older SA330Ba Puma “Pirate” helicopter gunships with a pintle-mounted (fixed, bulky, 19A floor-mount system), hand-fired Nexter M621 20x102mm cannon firing out the right side of the aircraft. It’s non-retractable, however, so the side door must remain open at all times.

EOS 2 has 12 SA342M1 Gazelle light scout helicopters armed with either four HOT-3 (High-subsonic, Optically-sighted, Tube-launched) anti-tank missiles, such as the SA342M1 “Viviane” model; one M134D-H 7.62mm Gatling gun on the right side; or one camo-painted Barrett M82A1 sniper rifle with laser aiming device on a stabilized pintle mount, such as the SA342M1 “Sniper” model.

EOS 3 includes eight EC725AP Caracal (H225M) transport helicopters and two French Air Force EC725R2 Caracal combat search-and-rescue (CSAR) transports. These Caracals are all equipped, since May 2018, with the lightweight, low-recoil Nexter SH 20 (M621) hand-fired 20mm door cannon on a swiveling pintle mount that’s fully retractable. It can be either tucked away inside the aircraft and out of sight or rapidly deployed and ready to fire in only 10 seconds. It is affectionately known as the Paquet Surprise, or “Surprise Package.” The EC725s can thus present the innocent, non-hostile appearance of unarmed rescue aircraft when desired, until they begin drawing hostile fire, and then they can shoot back with speed, heavy firepower, and total surprise.

The SH 20 gun system typically fires in eight-round bursts to conserve ammunition, and comes with a special “Sniper-Shot” function, firing a single, precisely aimed round when required. Its super-accurate, Sagem ODIN (made in Paris), quick-detachable, computerized sighting system uses thermal imaging for daytime/nighttime operations. It has a lead-computing, illuminated, aiming reticle, a laser rangefinder, and it weighs less than three pounds overall.

This 20mm weapon is only 19 percent heavier than a .50-caliber FN M3M machine gun but offers about 11 percent greater range (2,200 yards) and 30 percent greater “throw weight” of high-explosive projectiles in any given burst. So, it’s a noteworthy improvement in range, accuracy, and firepower.

In addition, the French Air Force’s 1/67 Helicopter Squadron, with the motto of “Fight and Rescue,” directly supports the Special Forces and operates nine more EC725R2 Caracal transports, also armed with the SH 20 swiveling, cannon system. It is now based at Cazaux, 88 miles to the northwest, along the Atlantic coast. By 2025, all 19 French Caracals in army and air force service are expected to be replaced by brand-new NH90 Caïman (“Cayman”) helicopters, and the Gazelles will be replaced by the Airbus H160M Guépard (“Cheetah.”)

The 1er RPIMa, patterned after the British Special Air Service (SAS) commandos and sharing the same motto (“Who Dares, Wins”) is France’s premier counterterrorist unit, also tasked with direct action, special reconnaissance, unconventional warfare, sabotage, hostage rescue, personnel recovery, and other vital missions. The 13e RDP, by comparison, with the motto of “Above and beyond the possible,” is an airborne-capable special-reconnaissance unit, specially trained for long-range reconnaissance, intelligence collection (often behind enemy lines), and direct action as required.

These elite units usually wear MultiCam camouflaged uniforms in the field and red (called amarante, or Amaranth, after the Alizarin shade of the flower) paratrooper berets in garrison. Their primary weapons are the HK416F assault carbine with 10.4-inch or 11-inch barrel or the FN SCAR-L carbine in 5.56x45mm. Favored submachine guns include the H&K MP5 series (in particular, the suppressed and very quiet MP5SD3 as used by the 13e RDP) in 9x19mm and the still-futuristic FN P90 in 5.7x28mm. The issued handgun was formerly the H&K USP9, but that has recently been replaced by the newer Glock-17FR Gen. 5, issued with Sellier & Bellot (Czech-manufactured) ammunition.

The French aircrews of the 4e RHFS are also attired mostly in Multicam uniforms. Since about 2014, they wear azure-blue (actually more of a bright, Royal-Blue shade) berets in garrison and Ops Core ballistic helmets while on duty. They hold the rare distinction of being the most heavily armed pilots in the world, bar none, with the Gazelle scout pilots in particular armed with a service pistol and an H&K MP7A1 personal defense weapon (PDW) clipped to their CIAS ballistic vests. This includes several spare magazines and two OFX F1 hand grenades plus an assault carbine inside the cockpit beside them and a variety of tactical knives. 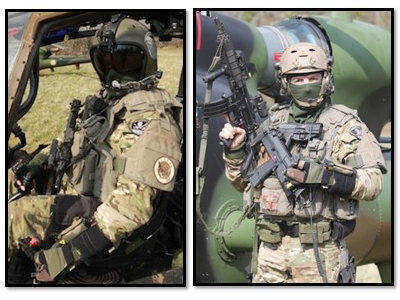 While these iconic, 2014 photos above clearly depict MultiCam uniforms, with an H&K USP9 handgun (an MP7A1 PDW in 4.6x30mm and an HK416F assault carbine), two of these weapons have changed in the past eight years. The new standard pistol since 2020 is the Glock-17FR Gen. 5 in Coyote Brown, held in a Blackhawk T-Series L3D chest holster in Flat Dark Earth.

Likewise, the superb HK416F carbine was replaced within the 4e RHFS in about 2020 by the ultra-compact B&T (formerly Brügger & Thomet of Thun, Switzerland) APC556-PDW in 5.56x45mm. It is an absolutely top-quality weapon, providing the same amount of firepower but in a weapon that is shorter, handier, and more compact than an HK416. It hangs low over a pilot’s chest within the tight confines of a helicopter cockpit. It’s actually about 7.5 inches shorter overall with a collapsing stock and an 8.74-inch barrel that readily accepts a B&T Rotex-X compact, quick-attaching suppressor that reduces sound by 13 decibels and eliminates muzzle flash. It also features a two-stage trigger, gas-piston operation, and a hydraulic recoil buffer for improved accuracy and reduced recoil forces. 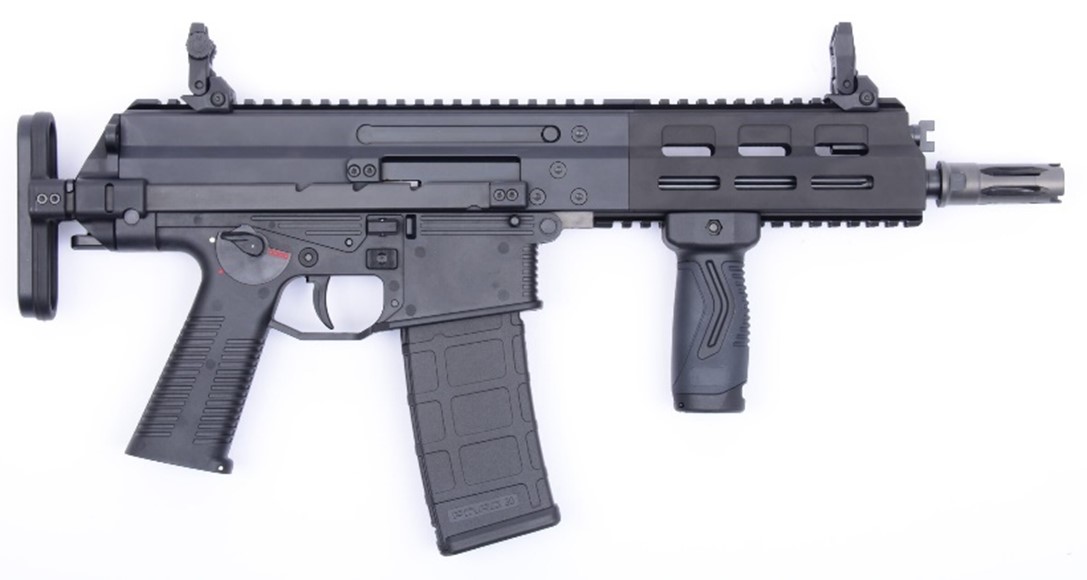 Next, we come to the compact combat/survival knives carried by 4e RHFS aircrews. They have used two very similar designs by Wildsteer, of Roche-la-Molière, 30 miles southwest of Lyons in southern France. First is the Sherkhan (SHE3113, $186) with a 5.31-inch blade; and later is the Blade H-4 (BLA32C, presumably H-4 means “Helicopters-4th regiment,” $220), also with a 5.31-inch, partly serrated blade as a survival knife. In addition, the 1er RPIMa carries the Wildsteer SAS Dagger ($186) with 5.39-inch, double-edged blade. The 13e RDP uses the Wildsteer Tarasco ($175) with 5.12-inch blade.

Finally, the French Army adopted a new, folding field knife in 2018 – the Tarrerias-Bonjean (TB, of La Monnerie le Montel in south-central France, 60 miles west of Lyons) CAC® (combat, assistance, campaign.) It’s a lightweight, robust, ambidextrous knife, which can be opened or closed with one hand, with a 3.7-inch blade of Nitrox high-carbon stainless steel. It also features a corkscrew (hey, it’s French after all, and they love their wine) and a window breaker. 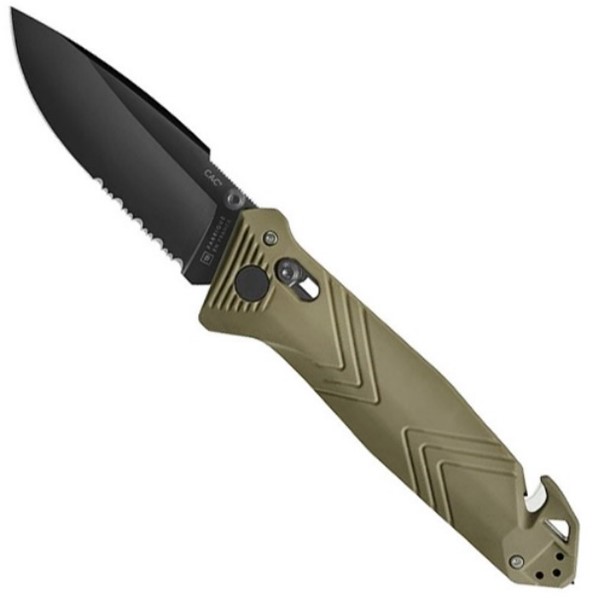 The French Special Forces and 4e RHFS have seen significant peacekeeping and combat action in Afghanistan, Cameroon, Iraq, Ivory Coast, Kosovo, Kuwait, Lebanon, Mali, Syria, and other world hot spots. They are very highly regarded by other NATO and allied special operations forces. They definitely stand out from other units, however, in utilizing the most powerful door guns in the world and having the very best-armed and best-equipped pilots and aircrews in their very hazardous fields of endeavor. 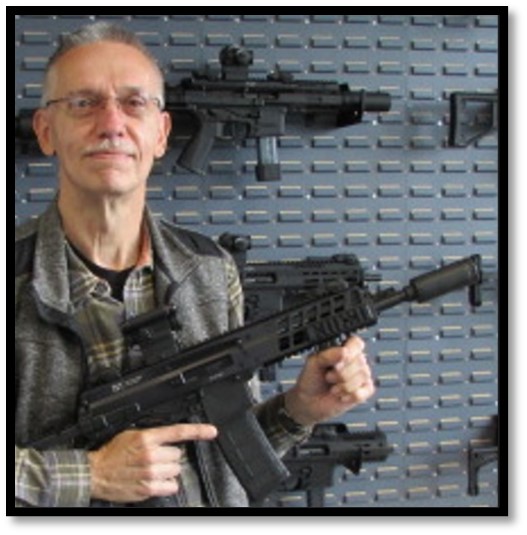 Guns of the CIA SOG in Ukraine