and then pulled the trigger. Pew. Ping. Dead center…the

recoil wasn’t all that noticeable. Pew. Ping. Dead on again

for a tight, three-shot group…every aspect of the MRAD –

streamlined design, was designed to improve the performance

rifle that you can zero the scope, park almost anyone behind

it, and watch them pick off targets 700 yards away.”

On April 7, 2021, Barrett Firearms Manufacturing, Inc., of Murfreesboro, Tennessee, officially announced that they had been awarded a five-year, $49.9-million contract under the U.S. Army’s Precision Sniper Rifle (PSR) program. The contract was to produce 2,800 Mk. 22 (or MK 22) Mod. 0 MRAD (Multi-Role, Adaptive Design) rifles with Leupold & Stevens Mark 5HD scopes and sniper-accessory kits. These weapons were to replace several currently-fielded, Army sniper rifles. Barrett stated that, “This multi-caliber, bolt-action, sniper rifle is capable of converting between 7.62x51mm, .300 Norma Magnum (NM), and .338 Norma Magnum (NM) calibers, based on the mission.”

The company had already earned an identical contract in 2019 for the U.S. Special Operations Command (USSOCOM, or just SOCOM). This contract was to produce the Mk. 22 MRAD, primarily in .338 Norma Magnum, as the Advanced Sniper Rifle (ASR). Interchangeable, fluted barrels in 7.62 x 51mm and .300 Norma Magnum were also provided. The .300 NM is for anti-personnel duty; the .338 NM is for defeating materiel/armor plating; and the 7.62 x 51mm is simply for short-range, urban environments and target practice. The .300 NM and .338 NM cartridges are provided by SIG Sauer under a brand-new, June 2022, $157-million contract. The foirst delivery order is for 4.5 million rounds.

The Mk. 22 MRAD rifle “increases stand-off distances, ensuring overmatch against enemy, counter-sniper engagements, and increases sniper capability…We are honored to have been awarded the Army’s Precision Sniper Rifle Program, in addition to SOCOM’s Advanced Sniper Rifle contract. The Mk. 22 is an extremely-capable, rifle system that meets the demanding requirements of our military branches.”

The .338 Norma (Swedish) Magnum was chosen over the popular, .338 Lapua (Finnish) Magnum round for the Mk. 22 MRAD. This is due to the weapon’s ability to accommodate a longer, heavier, Sierra MatchKing M1162 HPBT, very-low-drag, 300-grain projectile (with an improved ballistic coefficient), and greater accuracy and penetration at longer ranges.

The Mk. 22 military version of the MRAD differs from other models in several important aspects: First, it’s produced only in Coyote Brown finish, and is available only in three calibers: 7.62x51mm, .300 Norma Magnum, and .338 Norma Magnum (8.6×63.3mm). The handguard is also different from the basic MRAD, with an M-LOK attachment system featuring attachment points at the three, six, and nine o’clock positions, and a full-length, Picatinny top rail.

Next, the Mk. 22 includes a smooth, fully-adjustable, single-stage trigger fixed at just 2.5 pounds of pull, and finished with a protective, black coating. And the Mk. 22’s side-folding  buttstock includes an incremental, mechanical lock for adjusting comb height, an adjustable recoil pad, and a bag rider covering a Picatinny rail, which allows for the mounting of a monopod. The pistol grip is a Magpul MOE model, which may be replaced with almost any AR-15-type grip, as desired.

The Mk. 22 bolt rides in a unique, enclosed, polymer bolt guide, which provides smooth, reliable operation, even in harsh environments, where traditional designs with insufficient clearance can bind.

The receiver/chassis is milled from a single block of 7075 aluminum, and is infinitely modular, accepting all manner of attachments. Barrel lengths for the Mk. 22 are 20 inches in 7.62 x 51mm, 26 inches in .300 NM, and 27 inches (one inch longer than a standard MRAD, for slightly greater velocity and range) in .338 NM. Each Mk. 22 package includes the Leopold scope, a Harris bipod, Pelican 1750 case, tool kit, and two 10-round, polymer magazines. Barrett factory suppressors, such as the titanium AM30 and AM338, are available for about $1,530 each (MSRP). They reduce sound by 28 decibels, and eliminate muzzle flash, even in low-light environments. Plus, all suppressors easily thread onto the existing, Mk. 22 muzzle brake.

Joel Miller, the Director of Military Sales for Barrett Firearms, was recently asked about the primary selling point of the Mk. 22 MRAD. He candidly replied, “The accuracy. It’s sub-MOA. It’s very smooth. It has very low recoil, so you can get back on (target) very quickly. So, it’s an outstanding platform for what our U.S. military needs for their engagement criteria.”

Daniel Terrill wrote for Task and Purpose on January 28, 2022, “What’s gotten the military gushing is just how advanced the MRAD actually is. While you can adjust the trigger to your preferred pull weight, modify the manual safety for right- or left-handed operation, extend the stock and cheek rest to your liking, and even collapse the buttstock for storage, the highlight is a multi-caliber system.”

This system was likely inspired by the innovative, modular, Russian-manufactured, Kalashnikov SK-16 modular sniper rifle in 2016. The weapon can be chambered for either 7.62 x 51mm NATO or .338 Lapua Magnum, allowing shooters to change weapon calibers within the span of a single minute (See my Gunpowder Magazine article on  “Switch-Hitter: The Kalashnikov SK-16 Sniper Rifle” from October 16, 2021.)

Changing the barrels and caliber on the Mk. 22 is accomplished in the field in only about two minutes; just loosen two T30+ Torx screws in the receiver, swap barrels, and then change the bolt head and magazine. The overall weight of the rifle ranges from 13.9 pounds in 7.62 x 51mm, without ammo, a scope, or a suppressor, to 15.2 pounds in .338 NM.

The Mk. 22’s accuracy is truly exceptional, rated at 1 MOA (one inch at 100 yards) with standard, factory ammunition, or .5 MOA with match-grade ammo, especially in the  .338 NM chambering, out to distances of 1,500 meters or more, with an effective range of 1,600 meters. Israeli Defense Force snipers have achieved an astounding accuracy of just .35 MOA with Israeli Military Industry’s (IMI) 7.62 x 51mm NATO ammunition.

Summarizing the remarkable attributes of the Barrett Mk. 22 military rifle is no simple task, but Robert Jordan said it best for Tactical Life magazine on March 9, 2022, writing that, “Shooting a single, ragged hole was stupid-easy at 100 yards…The gun was crazy accurate. Recoil felt like less than a .308…The Barrett Mk. 22 MRAD is the absolute king of precision, sniper rifles.” 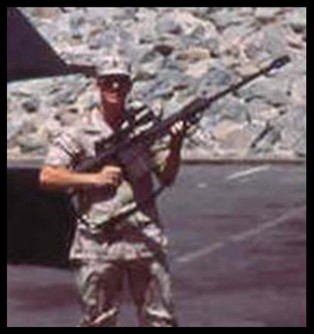