“I have used S&B Blue ammunition now on sufficient outings

to be totally happy with its performance under field conditions.

S&B Blue works like a dream, decision and permanent change made.”

Sellier & Bellot (S&B), the noted, ammunition manufacturer from Vlašim, in the Czech Republic, only 30 miles southeast of Prague, bears an unusual and uncharacteristic, French name. It was founded in 1825 by Louis Sellier, a German businessman of French origins, and Jean Maria Nicolaus Bellot, a Frenchman, originally creating percussion caps (156 million in 1837 alone), and later transitioning to cartridge production in 1870. Since 2009, it has been a subsidiary of the Brazilian company CBC (Companhia Brasileira de Cartuchos, or Brazilian Cartridge Company, in English.)

In October 1918, S&B became the principal supplier of handgun ammunition for the Czechoslovakian Army and police; and they expanded into the Asian and South American markets with great success. By 1945, their range of commercial ammunition was extended to 40 rifle calibers, 10 pistol calibers, and 20 revolver calibers. The company currently has 1,600 employees, and an annual revenue of about $185 million, with $390 million in total assets as of 2018.

This author has used Sellier & Bellot ammunition in the past, but the long-standing, European company previously sold mostly full-metal-jacket (FMJ) loads in the United States. These were less than desirable for hunting rounds or self-defense ammunition, so S&B loads were mainly useful only for target practice. But, they have since branched out quite a bit, highly diversifying their cartridge offerings in many, many calibers. They currently produce the following load types:

Semi-jacketed, soft-point (SP) bullets: These are produced in a wide variety of calibers, ranging from .22 Hornet to .45-70 Government, with 30 calibers in between.

Semi-jacketed, soft-point, Cutting Edge (SPCE) bullets: Hunting rounds that lock the copper jacket and lead core together. These are mostly hunting loads in 7x64mm, 8x57mm, .308, and .30-06.

With eXergy (XRG) bullets: These are solid-copper, hunting bullets with an aluminum tip to seal the hollowpoint cavity until impact, produced in .270 Winchester, 7mm Rem. Mag., .308, .30-06, .300 Win, Mag., and various, European calibers.

With eXergy (TXRG) Blue bullets: These are solid-copper, boat-tail, hunting rounds with a blue, plastic, ballistic tip. They’re manufactured since 2008 in 6.5mm Creedmoor, .270 Winchester, .300 BLK, .30-06, .308, 7mm Rem. Mag., and a number of European calibers. Viking Arms of Summerbridge, England, recently listed S&B eXergy Blue as their “Rifle Ammunition of the Year” for January 2022.

For example, my primary hunting rifle is a Remington 700 in .30-06. Sellier & Bellot manufactures no less than 16 different loads for it, including five FMJ cartridges (there’s even a very-high-velocity, 124-grain version, at 3,115 fps), and two TXRG sold-copper cartridges, in 165 or 180 grains.

Pistol and revolver cartridges: These cover the full spectrum from .25 ACP to .460 S&W Magnum, with one of the more-interesting loads being a 100-grain, 9x19mm soft-point at a blazing 1,404 fps! Differing pressure specifications between the U.S. and Europe means that European loads are typically about five to 15-percent hotter. For example, Remington’s 71-grain, .32 ACP metal-case (MC) cartridge averages 905 feet per second, while the Sellier & Bellot 73-grain, full-metal-jacket (FMJ) ammo runs at 1,043 feet per second, or 15.25-percent faster, with 36-percent greater muzzle energy!

Nontox pistol and revolver cartridges: These are available in 9x19mm through .45 ACP chamberings, including a 91-grain, 9x19mm, fully-jacketed, solid-zinc bullet at 1,493 fps, offered “for training and target-shooting applications.”

S&B made the following announcement: “This solid-copper, hollowpoint bullet construction results in near-100-percent weight retention, regardless of the barriers encountered. Light-for-caliber bullet weights produce low perceived recoil, high velocity, and reliable expansion from today’s compact, personal-defense handguns. The impressive, real-world performance of XRG Defense has been proven by many European law enforcement units.” In fact, the XRG Defense series has been used and tested since 2013 by European police organizations on an experimental basis, and have been released only recently in the United States. 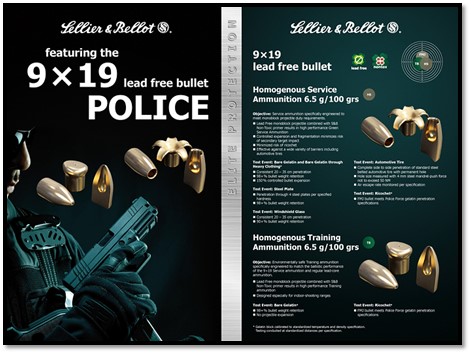 While Barnes Bullets and CorBon have been pioneers in producing high-quality, SCHP bullets and ammunition, S&B has finally branched out into this vital, state-of-the-art, self-defense market niche. This is a bold leap forward for traditional, European ammo manufacturers, where even conventional, hollowpoint bullets have been either discouraged or forbidden until very recently. Sellier & Bellot, therefore, is making a great advancement in order to remain competitive in today’s fast-paced world.