SEAL Team Six and the MP7 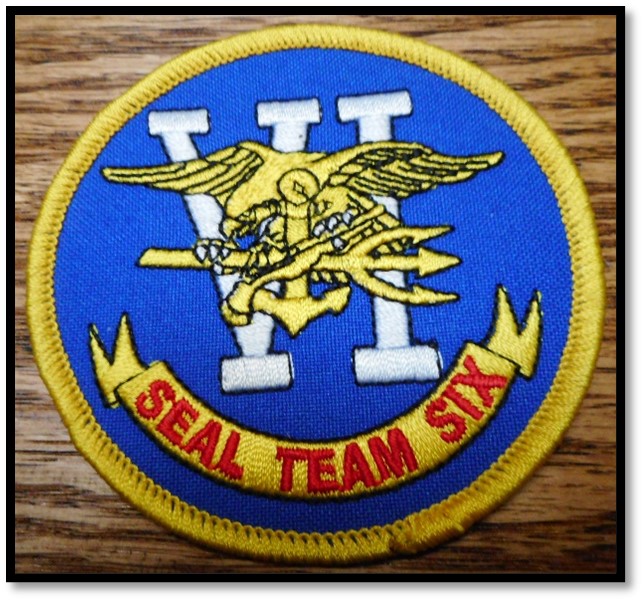 “The U.S. Navy’s…SEAL Team Six, is one of the most-famous units that employ

the MP7 in the special operations community…Smaller, lighter weapons that

can provide automatic fire are invaluable for close-quarters combat, and the

4.6x30mm’s armor-piercing capability makes the MP7 a natural choice for

like it will fill a crucial, middle ground for those looking for the best

The U.S. Navy’s elite, Special Warfare Development Group (DEVGRU), formerly and still unofficially known as SEAL Team Six, is the Tier-One, special operations unit that famously killed al-Qa’ida terrorist leader Osama bin Laden in Abbottabad, Pakistan, on May 2, 2011. The Group issues the unique, small-caliber, Heckler and Koch (H&K) MP7A1, personal defense weapon (PDW) to all of its operators as one of their primary, assault weapons, in addition to the longer and more-powerful HK416 carbine.

The superb MP7 is a highly specialized weapon, firing one of the tiniest, centerfire cartridges in the world: the H&K 4.6x30mm round (actually 4.65×30.5mm, or .183-caliber). So, one has to wonder why one of the two best counterterrorist units (Delta Force and SEAL Team Six) in the United States, and indeed in the entire world, would employ such an expensive, close-combat weapon in a minuscule caliber that hardly provides decisive, one-shot, stopping power.

The answer is actually quite simple: the 4.6x30mm, standard-issue round for the German Army and for SEAL Team Six, is called the DM11 Penetrator Ultimate Combat load, firing a 31-grain, copper-plated, steel projectile at 2,362 feet per second (Mach 2.09), with 382 foot-pounds of muzzle energy. It can easily penetrate a NATO-standard, ballistic vest (with 1.6mm titanium and 20 layers of woven, Kevlar fabric) at more than 200 meters, and most terrorists in the 21st century wear body armor. There’s also an improved, 31-grain, DM31 round, and Fiocchi (Italian company) manufactures 31-grain, copper-plated, steel (CPS) “Black Tip” ammunition with a velocity of 2,410 feet per second (Mach 2.13) and stopping power equivalent to 9x19mm pistol rounds.

The MP7 was initially created in 1999 as the H&K PDW. It was renamed the MP7 in 2001. Two years later, it officially became the MP7A1, with a redesigned pistol grip, a smaller stock, and other minor modifications. It weighs a mere 4.63 pounds with a full, 20-round magazine. It is only 16.3 inches long with the stock collapsed (or 25.1 inches with the stock extended), has a 7.1-inch barrel, and its magazines are available in either 20, 30, or 40-round (preferred) capacities, inserted into the pistol grip.

Its effective range is 660 feet, and the rate of fire is 950 rounds per minute or a speedy 15.8 rounds per second! H&K accurately claims that it will defeat all standard-issue body armor, with adequate, terminal ballistics after penetrating the armor. They have supplied detailed graphics of actual, ballistic-gelatin testing to support their statements.

An October 10, 2013, article for The Truth About Guns stated, “The H&K MP7A1 is, unquestionably, a lethal weapon. It’s killed many a terrorist…They (H&K) are to the gun world what Lamborghini is to the car world, producing overpriced, super guns…The MP7A1…(is) as compact as possible, capable of being fired either single-handed, or with a stock, and has a massive magazine. The resulting PDW is ideally still capable of putting down the bad guys…being compact and portable, perfect for close-quarter fighting or where size is a major consideration.

“With supersonic ammunition like the 4.6x30mm, the power of the caliber comes from its speed, not its size. All that speed has another drawback: sound. Without a silencer, the MP7A1 is somewhere between ‘uncomfortable’ and ‘deafening’ when fired. With a silencer, the gun is hearing safe, but there’s no stealthiness at all to it…They’re made for hosing down close-range targets…However, if you’re looking for accuracy, the gun delivers that in spades…50 yards away…Even with iron sights, it was pinpoint accurate. It’s amazing the level of accuracy you can get with…a seven-inch barrel…The trigger is crisp and light…As for recoil, it’s practically nonexistent.

“The gun produces an enormous level of back pressure, which causes a small cloud of exhaust to form right under your nose…Is the MP7A1 perfect? Nope, but its slick design, light recoil, and high rate of fire make it excellent for taking out bad guys and looking cool at the same time.” 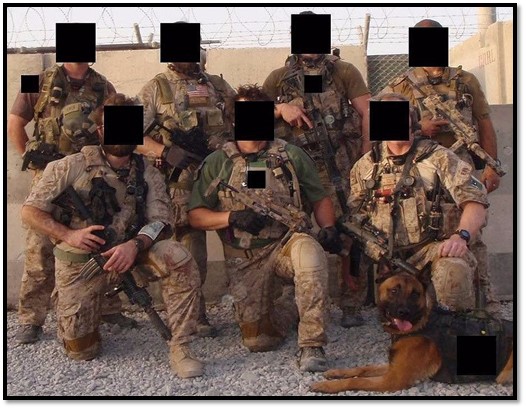 Shelby Murdoc assessed for We Are The Mighty on March 23, 2020, that, “The MP7 is suppressor-ready, adding another level of utility to an already-capable gun for special operations uses…When the stock is extended and the forward grip used, it suddenly becomes a mini-carbine, with performance similar to full-sized guns as long as the range stays below 200 meters or so…The smaller, lighter round means that more ammunition can be carried and that it has minimal recoil, even in full-automatic shooting…A 40-round, MP7 magazine…means more firepower ready for action and fewer mag changes, both of which can easily spell the difference between success or failure in life and death situations.”

Travis Pike wrote for SOFREP on July 5, 2021, that, “For boarding ships, climbing ladders, clearing out tunnels, and more, the MP7 is much easier to use than a rifle…The little gun’s small size gives it an advantage over even the shortest 5.56mm carbines. In its specific niche, it’s tough to get a better weapon. It offers more range, power, and control than a pistol, but is lighter and handier than a more-traditional rifle. Users can add optics, suppressors, and laser-aiming units to their modular design…The MP7 delivers a superbly smooth firing experience…in action.

“The round generates less recoil and makes controlling the weapon in full auto relatively easy. Although the 9mm can be effective out to 100 yards or so with an experienced shooter, the 4.6mm can double that range with ease…The SEAL teams are quite fond of the MP7. It provides a very short and controllable weapon for missions that require extreme close quarters…The MP7 offers the point man a light and handy weapon for clearing rooms.

“SEALs aren’t the only spec ops commandos wielding the MP7. Special Ops forces in Australia, the U.K., France (GIGN, DGSE-SA, and Special Forces), Japan, Norway, Russia, and a dozen (actually, 17) more carry the MP7 in one role or another,” including Austria, Germany (GSG9 and the army), Ireland, Jordan, Serbia, Spain, and Turkey, among other nations. 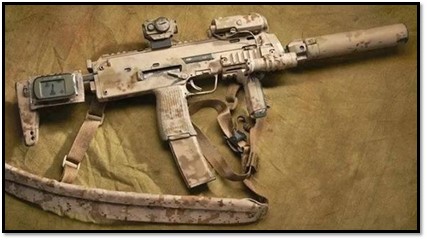 Dan Shea noted for Small Arms Review (SAR) on August 2, 2022, that, “Typical of H&K products, the MP7 worked flawlessly, and was smooth to operate…At 100 yards, the MP7 was controllable to the point of keeping long bursts on the target, and the penetration was impressive…the penetration of typical body armor leaves sufficient energy to achieve H&K’s claimed, terminal ballistics…it is very controllable…The reflex sight was very quick and simple to use in all positions.

“Firing with the front pistol grip down, using both hands, but keeping the stock retracted, was an impressive, SMG-style package…how compact the whole package would be for an entry team to use…Well-designed, well-executed, and quite reliable in the tests. I saw it take a lot of abuse, and just keep on running…the MP7 is very handy…H&K has a winner on their hands…for Special Operations teams.”

In 1987, while assigned to a special operations unit, this author took part in a hostage-rescue exercise aboard a decommissioned cruise ship about 10 miles off the coast of Virginia Beach, Virginia, not far from SEAL Team Six headquarters. Acting in the role of a cruise ship passenger/hostage, I rode in an all-black, MH-60A, Black Hawk, transport helicopter out to a Coast Guard cutter shadowing the cruise ship. I landed on heavy seas, received an exercise briefing, and then transferred to the larger vessel via a small motorboat manned by SEALs. With six-foot swells in the ocean that very dark night, I jumped for the cruise ship’s Jacob’s ladder at the top of a rising swell and ascended onto the main deck.

Alongside three more members of my unit, I was herded into passenger cabins by SEALs acting as terrorists. About an hour later, the ship was assaulted by several MH-60A Black Hawks and tiny, black, MH-6E Little Birds, with Navy SEAL operators landing and fast-roping onto the massive vessel with incredible stealth and speed. Within minutes, we were all boldly “rescued,” and had the rare opportunity to see SEAL Team Six in action in its earlier years, before it acquired MP7s.

I’ve also been repeatedly “rescued” by Delta Force, during lightning-fast, airliner-storming events at night, each lasting less than 30 seconds, but that’s another story altogether. And, that very same year, an Army sergeant and I parachuted from the open tailgate of an MC-130E Combat Talon I, special operations aircraft with eight members of Delta Force, but let’s get back to SEAL Team Six and the MP7 again.

There’s a newer, MP7A2 version of this classic PDW, with short, Picatinny rails on both sides and the bottom, and a fixed, forward hand grip instead of a folding grip, but those are the only real differences. SEAL Team Six appears to be using both versions, based on recent, photographic evidence. 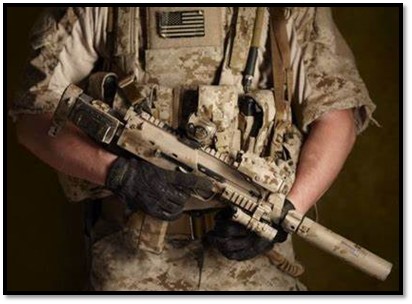 The H&K MP7 has seen extensive, combat action in Afghanistan, Iraq, Pakistan, Syria, and other world hot spots. Despite its tiny caliber (only half the diameter of a 9mm bullet, with a mere one-fourth of the cross-sectional area), it’s basically impossible to find another close-range, assault weapon that weighs less than five pounds, is compact, utterly reliable, and unleashes nearly 16 rounds per second of high-velocity, armor-piercing ammunition. That’s why SEAL Team Six loves the MP7 very much and uses it more often than ever before.

Warren Gray is a retired, U.S. Air Force intelligence officer with experience in joint special operations and counterterrorism and is an NRA member. He served in Europe and the Middle East, earned Air Force and Navy parachutist wings, four college degrees, and was a distinguished graduate of the Air Force Intelligence Operations Specialist Course, and the USAF Combat Targeting School. He is currently a published author, historian, and hunter. You may visit his website at: warrengray54.vistaprintdigital.com.

Get To Know: The Franchi SPAS-12