“The Mini-14 (is) one of the more-reliable, semi-auto, centerfire rifles available…

when needed. It gets an unconditional recommendation from me.”

The time-honored, Ruger Mini-14 rifle was first introduced in 1973 as a scaled-down version of the M14 service rifle, but it also incorporated the simple, rotating bolt from the M1 Garand, and the combat-proven, gas system from the M1 Carbine. In 2005, Ruger completely revised and re-tooled their Mini-14 assembly line in response to numerous complaints about poor accuracy, making huge improvements in overall quality, and more than doubling the accuracy level, from approximately 4 MOA to less than 2 MOA. They modified the gas system to reduce barrel vibration, tightened the manufacturing tolerances, and introduced a heavier, tapered barrel for enhanced accuracy.

Rich Grassi reviewed the new and improved, Ruger Ranch Rifle All-Weather .223 (580-series) for Gun Buyer’s Guide in 2007, writing that, “The Mini(-14) was destined to be a favorite…the rifle was light and easy to shoot…I became a fan of the Ruger…my GB (Government Barrel version, with flash suppressor) exhibited no real muzzle flash…The Mini-14 makes a superb varmint gun for farm and ranch…made from stainless steel…The whole package is slick and quick-handling…The recoil, as expected, was minimal…in .223 or 5.56mm…The open-top action tends to clean itself, making the Mini-14 one of the more-reliable, semi-auto, centerfire rifles available…It’s a fun gun that can be used to solve serious problems when needed. It gets an unconditional recommendation from me.” His field accuracy, as tested, was 1.0 to 1.75 MOA – quite impressive!

In 2009, Ruger introduced their Mini-14 Tactical Rifle, with a 16.12-inch barrel, 20-round, factory magazine, and factory flash suppressor, shown above in its stainless-steel variant, which is currently listed at an MSRP of $1,439. Except for those three features, it’s identical to the earlier Ruger Ranch Rifle All-Weather #5805, with a black, synthetic stock, cold-hammer-forged barrel, and adjustable, open sights, like those on the M14.

Mike Searson reviewed the Mini-14 Tactical Stainless rifle for Ammoland.com on May 24, 2018, noting that, “We love the classic looks and styling of the Mini-14…we strongly prefer these iron sights to optics…At the range…We were pleasantly surprised to achieve less than (2 MOA accuracy) with the irons! The 20-round, factory magazines were impressive, and proved reliable on every shooting session…The…magazines made our day…an accurate, reliable, semiautomatic rifle with more of a traditional, sporting-rifle stock.

“The improved version of the Mini-14…can also help…shooters who live in ‘ban states’ governed by prejudiced lawmakers who base their legislation on appearance over function…the Ruger Mini-14 is a classic, American design…It is one of the few semi-automatic rifles available in stainless steel, and that may be enough of a reason for some shooters interested in an ‘all-weather’ rifle.”

Matt Collins added for Gunbacker.com, “It was as rugged as a tank out of the box…maintaining enough power for self-defense, or even hunting medium-sized game…The rifle is short…perfect for getting in and out of a truck while on the hunt, or maneuvering inside a home in a defensive situation…The rifle shoulders easily, is lightweight…and will absolutely, positively, 100-percent go ‘bang’ every time you squeeze the trigger…That’s five rounds in about a 1.1 MOA grouping, with three shots so close they’re touching…which frankly is much better than I was expecting…2 or 3 MOA from a 5.56 or .223 is more than accurate enough.

“That’s the real joy of the Ruger Mini-14…a tactical rifle in its own right…The Mini has a character and style all on its own, and that’s just something most factory ARs don’t have…There’s a lot more to the Ruger Mini-14, though…you have some frankly stellar reliability…The stainless models with synthetic stocks, in particular, will stand up to years and years of rough use…while trekking over rough terrain.”

This author purchased a brand-new, improved, Ruger Ranch Rifle All-Weather rifle in 2006 for just $530 at the time, primarily because of my state’s severe restrictions on any type of AR-15-style “assault rifle,” yet there are comparatively few restrictions on the Mini-14, except that the “Ruger Mini-14 folding-stock model” is banned. However, before October 1, 2013, you could legally buy a folding stock separately and install it on your Mini-14, which I did. After that date, you cannot legally install a folding stock. Likewise, high-capacity magazines holding than more than 10 rounds are legal to own, but they cannot be sold, bought, or transferred within the state.

Even before the Mini-14 Tactical Rifle was introduced, however, I decided to upgrade my stainless-steel, Ruger Ranch Rifle to a similar configuration. I had the barrel professionally shortened and crowned ($97) by a qualified gunsmith from 18.5 inches to just 15 inches, and a Smith Enterprise, Inc. (of Tempe, AZ), Vortex flash suppressor ($52) permanently attached by spot-welding the mounting screws. The total barrel length extended to a fully legal 16.5 inches, including the Vortex suppressor, which effectively reduces 98 percent of visible muzzle flash.

From an earlier Mini-14 rifle purchased in 1987, I still had several 20-round and 30-round, Ruger factory magazines on hand, as well as military ammo pouches to hold them. So, my rifle was now fully up to Mini-14 Tactical Stainless configuration, with an even shorter, stainless-steel barrel and a much better flash suppressor. Then, I improved upon that by legally installing a Choate folding stock ($79) in 2006.

The true purpose of any “tactical” rifle such as this one is self-defense, although it may perform equally as well for short-range plinking, varmint control, or medium-game hunting. However, it’s primarily a defensive weapon for close-range encounters. With that in mind, a scope is more of a hindrance than a help, obscuring your peripheral vision in a fast-moving, fluid situation.

In fact, ballistics experts have shown that a Mini-14 with a scope will typically result in about 1.7 to 3.5 MOA accuracy at 100 yards, versus 1.5 to 4.0 MOA accuracy with iron sights, which is effectively no difference at all, and most self-defense situations occur well within 25 yards, where the tiny, MOA difference shrinks even further. Then there are the serious, legal considerations. If you ever have to shoot someone with a scoped rifle, you’ll have a very hard time convincing a jury that this was strictly a close-range, defensive weapon. The bottom line … the factory, iron sights are just fine.

Ammunition selection for a tactical rifle is another matter. The U.S. Special Forces, Delta Force, and SEAL Team Six have all switched to the Mk. 262 cartridge, firing Sierra MatchKing 77-grain, open-tip-match (OTM) bullets, due to better penetration and increased stopping power in actual, combat situations.

The civilian cartridge that most closely approximates that level of performance is the Hornady TAP (Tactical Application Police) 75-grain load in 5.56mm (#8126N) or TAP-FPD (TAP For Personal Defense) 75-grain load in .223 (#80268), with corresponding velocities from a 15-inch barrel at roughly 2,650 feet per second in 5.56mm, or 2,475 feet per second in .223. Either may be safely fired in the Mini-14 Ranch Rifle or Tactical models. The heavy bullet typically penetrates 13.8 inches, and expands to about .40-caliber, with approximately 72 percent fragmentation, especially at close ranges, when the muzzle velocity remains above the “fragmentation threshold” of 2,260 feet per second (Mach 2.) It will also cleanly penetrate a quarter-inch, steel plate at 25 yards. Wow!

In addition, there is another important, legal consideration here. If you do have to shoot some belligerent perpetrator in self-defense, and must later face a liberal, possibly hostile, anti-gun jury to explain your actions, it’s infinitely safer to use ammunition that specifically states, “Tactical Application Police – For Personal Defense.” No one is likely to argue against the use of “police-approved” ammunition, clearly designed for self-defense purposes. We may not like to think about potential lawsuits for our own justifiable, self-defense actions, but it happens every day, so it pays to be on the safe (and politically correct) side in your ammo choices.

When it comes to high-capacity magazines, the Mini-14 is notorious for not liking aftermarket magazines, and I’ve always found Ruger factory magazines to be 100 percent reliable, and readily available from Ruger in five-round, 10-round, 20-round, or 30-round configurations, as shown below: 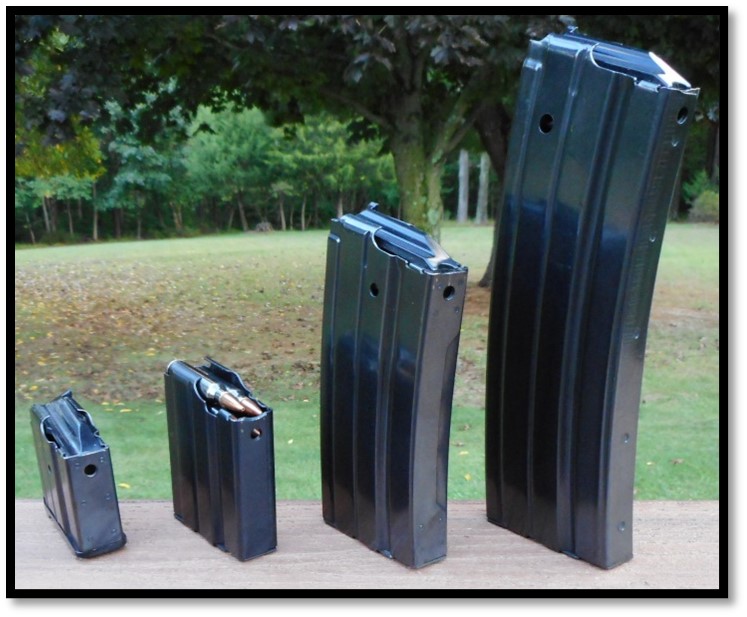 Depending upon legal restrictions in your state, you should choose wisely, bearing in mind that “less is more” when it comes to acceptable, self-defense encounters. I keep my Mini-14 ready for defensive action at all times with the fixed, factory stock, and two 100-percent-legal, 10-round magazines loaded (as you can see above) for immediate use. In a highly restrictive, liberal state like mine, the plain, factory, less-modified approach is best. Twenty rounds of Hornady TAP will still stop almost any self-defense fight very quickly, with unquestioned legality from the fixed stock and 10-round magazines. I’ll save the folding stock and 30-rounders for far more serious threats, such as potential looting, rioting, gang violence, natural disasters, and other complex situations where there is unlikely to be any police presence nearby to help protect my family.

Two minor side effects of shortening the barrel by 20 percent are that the gun now shoots about 1.5 to two inches high at 50 yards, and cranking the rear, ghost-ring sight all the way down does not compensate for this factor. But I’d rather have the impact point slightly high where I can actually see it, than low and out of my view. Secondly, the gas-piston system now operates more abruptly, throwing the empty, brass casings far to the right. I was able to easily solve this problem, however, by internally installing an Accuracy Systems extra-power, recoil spring ($23) and dual recoil buffers ($20, although Wilson Shok-Buffs will also work) at the rear in 2018, with no adverse effect on cycling the action. 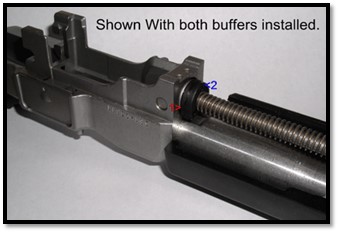 Colt’s Manufacturing, LLC produces the Colt M4 Carbine (LE6920) with a 16.1-inch barrel for $1,099, the Colt M4 Monolith (LE6940) for $1,399, and the Colt M4A1 Carbine for $1,499 MSRP. These are the primary competitors for the Ruger Mini-14 Tactical series, slightly less expensive, except for the military-style M4A1, and definitely more popular. But what about those Democrat-controlled states like mine, where the M4/AR-15-style rifle is very highly restricted, or even banned entirely? Yet the traditional, innocent-looking, Ruger Ranch Rifle with a small, five-round magazine is seen as entirely harmless. So, yes, there are definite, political considerations.

But the real clincher is finding a tactical, semiautomatic carbine with the same firepower and accuracy as the M4 or AR-15, but in weather-proof, stainless steel. The list is very short indeed. In fact, it’s practically nonexistent. The Ruger Mini-14 Tactical Stainless is the undisputed king of stainless-steel, tactical weapons, a compact, handy, ultra-reliable, defensive carbine that can handle the worst weather conditions, including harsh winters, and still protect your life in a deadly confrontation at close range. Nothing else even comes close.

Warren Gray is a retired, U.S. Air Force intelligence officer with experience in joint special operations and counterterrorism, and is an NRA member. He served in Europe and the Middle East, earned Air Force and Navy parachutist wings, four college degrees, and was a distinguished graduate of the Air Force Intelligence Operations Specialist Course, and the USAF Combat Targeting School. He is currently a published author, historian, and hunter. You may visit his website at: warrengray54.vistaprintdigital.com.