It looks like the folks at Deterrence Dispensed, Deterrence Dispensed – Print Freedom, have come up with another interesting weapon design!  Their 3D-Printed FGC-9 pistol caliber carbine designed by JStark1809 ⴕ is an internet sensation, and now they’ve released their 3D-Printed “Long Range Soda Delivery Cannon” aka the “CANzerfaust!”  The design is a 66mm, recoilless, drink-can launcher that can be fired from the shoulder or can be converted quickly into a mortar.  The CANzerfaust looks like a Panzerfaust, RPG, Bazooka, and Mortar all rolled into one design.

Videos of the CANzerfaust in action have been released and the results are spectacular.  The files needed to produce the CANzerfaust have not yet been released, but when they are, anybody with a 3D printer can manufacture the device.  The design is typical Deterrence Dispensed, do-it-yourself, and allows the manufacturer to assemble the launcher without using any regulated parts.

The Panzerfaust, literally “Tank Fist,” line of weapons was developed by Germany during WWII as an inexpensive, single shot, recoilless, anti-tank weapon.  The Panzerfaust 30 was equipped with a warhead consisting of 1.8 lbs of a 50/50 mix of TNT & Hexogen explosives. It could penetrate the armor of any vehicle from that time.  The U.S. used some of the Panzerfaust design in the M72 LAWS rocket, as the Russians did for their RPG-7.

The design looks similar to the Projected Recoilless Improvised Grenade (PRIG): an improvised rocket launcher that was created by the Provisional Irish Republican Army (PIRA) during the “Troubles” in Northern Ireland.  The PIRA version was deadly when used in at least eleven attacks in the 1990s.  The CANzerfaust uses a 3D printable recoil system, which allows the user to fire the launcher from the shoulder without recoil. 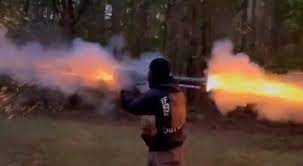 Deterrence Dispensed stresses that this device is for delivery of soda or adult beverages and is never to be used in an unlawful manner.  Please heed their advice and don’t get into trouble with the ATF!

That’s all for now folks!   Please keep sending in your questions, tips, and article Ideas.  And as always – “Let’s Be Careful Out There”

Friedrich Seiltgen is a retired Master Police Officer with 20 years of service with the Orlando Police Department.   He conducts training in Lone Wolf Terrorism, Firearms, and Active Shooter Response.  His writing has appeared in RECOIL, The Counter Terrorist Magazine, American Thinker, Homeland Security Today, and The Journal of Counterterrorism & Homeland Security International.  Contact him at polizei22@msn.com