“China is investing far more heavily in SHORAD capabilities, which is a major trend globally, in order to protect its maneuvering forces and fixed installations from cruise missiles, combat drones, and other low-flying aircraft. This system is similar in concept to Russia’s Pantsir family of systems, which combines anti-aircraft guns with short-range air defense missiles…The Type 625E, however, could even be useful as a highly mobile counter-rocket, artillery, and mortar (C-RAM) system with its rapid-fire Gatling gun.”

The designation “625E” for Russian or Chinese weapon systems probably represents “six barrels, 25mm,” with the “E” sometimes (but not always) designating “Export,” although the People’s Republic of (Communist) China has never displayed a six-barrel Gatling gun before, or a 25mm Gatling gun. Both concepts are new to them. Here’s a frontal view of the Type 625E, where you can visibly count the barrels: 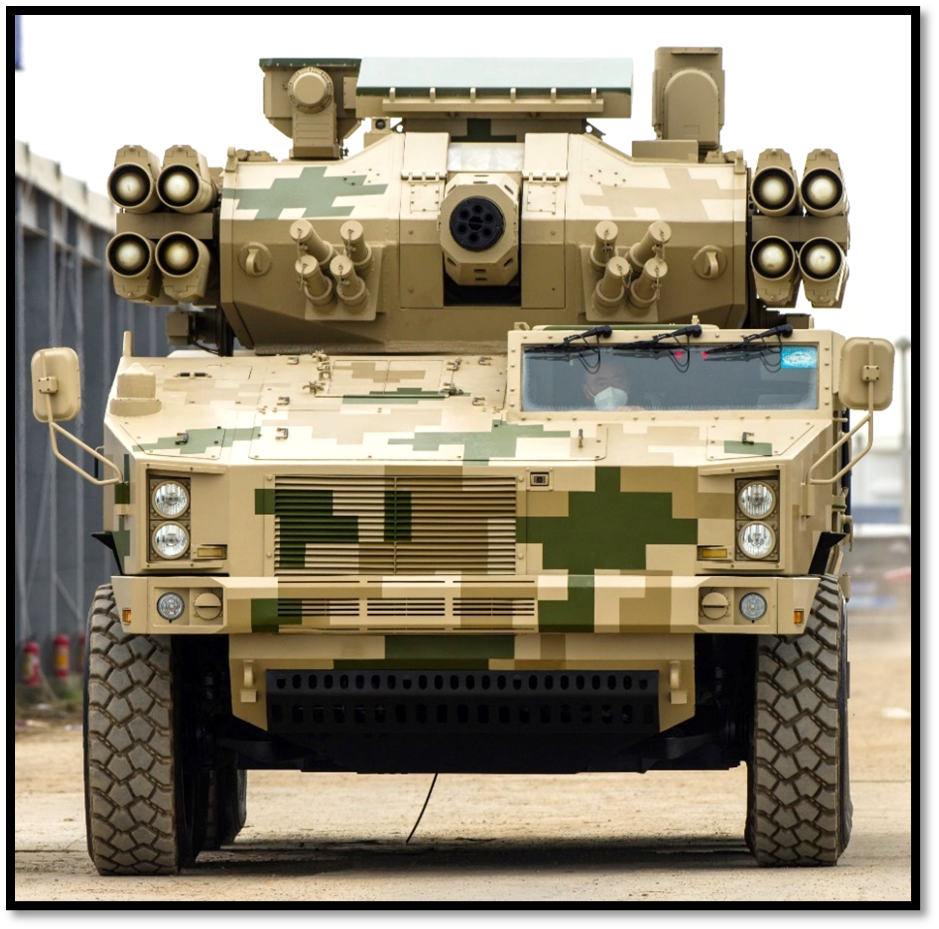 In addition to the new Gatling gun, the Type 625E clearly mounts eight improved, FB-10A air defense missiles with an effective range of 6.2 miles and engagement altitudes of 49 feet to 16,404 feet. It appears to use infrared homing, a “heat-seeker” missile, although a radar- or a dual-mode guidance of some type is also possible. 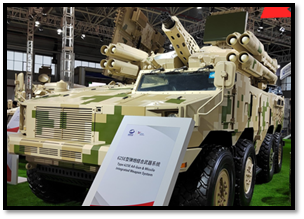 There is also a folding, radar array (visible in the photo above) for detecting and tracking low-flying aircraft, helicopters, drones, or cruise missiles. An infrared tracker is available as a backup, sensor system.

What’s interesting about this weapon is that the only known, 25mm Gatling guns in the world to date have been the five-barrel, General Dynamics GAU-12/U Equalizer 25x137mm electric Gatling gun used aboard the AV-8B Harrier II “jump-jet” Marine Corps fighter, and its four-barrel derivative, the General Dynamics GAU-22/A Gatling gun, currently employed in the Lockheed Martin F-35A/B/C Lightning II stealth fighter.

China has produced (since 1999) a single-barrel, 25mm cannon in the past, most notably on the Norinco PGZ-95 (Type 95) SPAAA (Self-Propelled Anti-Aircraft Artillery) system. This Chinese weapon mounts four Type 87 25x183mmB guns (somewhat similar to an Oerlikon KBB 25x184mm weapon), and four Qian Wei QW-2 short-range, heat-seeking missiles with a maximum range of 3.75 miles. There is also an updated and improved model of this system, designated the PGZ-04/A. 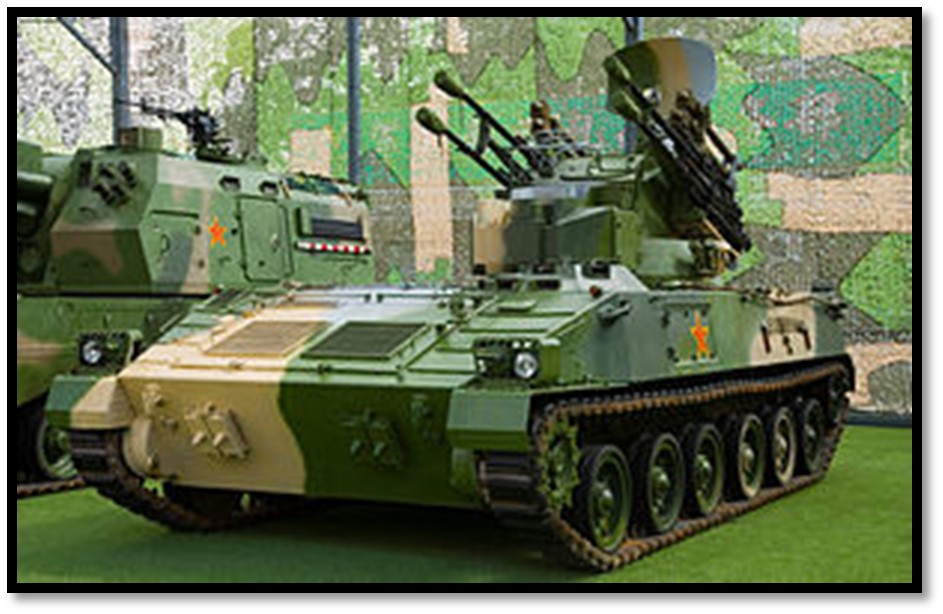 The Russian Federation has produced a six-barrel, 23x115mm Gatling gun, the GSh-6-23, for the MiG-31 Foxhound interceptor and the Su-24M Fencer ground attack aircraft. The Soviet Air Force halted the use of this gun in 1982 due to premature shell detonation and other system failures. Since then, all Russian MiG-31s and Su-24s have flown with fully operational guns installed, but embarrassingly, without ammunition.

The PGZ-95 and PGZ-04/A both utilize a CLC-1 pulse-Doppler, search radar (6.8 miles range), optical and infrared tracking sensors, and laser rangefinder. So, the Type 625E should be at least as well-equipped. 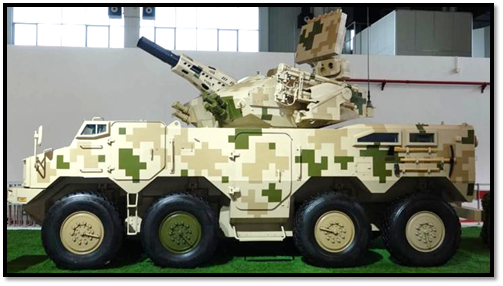 This new, six-barrel weapon is closely related to the problematic, Soviet/Russian GSh-6-30 Gatling gun also chambered for 30x165mm ammunition. This was a powerful, ground-attack weapon used in the MiG-27 Flogger-D/J ground-attack fighter, the Su-25TM/Su-39 Frogfoot fighter, and various naval gun systems. It was exported to India, Kazakhstan, Sri Lanka, and Ukraine.

The aircraft version is infamous for damaging all aircraft to which it is mounted due to horrendous recoil and vibration, resulting in engine failures, avionics shutdowns, and other harrowing stories. So, only 12 Flogger-J ground-attack aircraft remain in service worldwide, with the Kazakhstan Air Force. All 16 Russian Air Force Su-39s have replaced their problematic, GSh-6-30 Gatling guns with the standard, GSh-30-2 twin-barrel weapon of the Su-25 Frogfoot ground-attack series.

The CS/SA5 air defense system appears to utilize the same 8×8-wheeled vehicle as the newer, Type 625E system with a six-barrel, 30mm cannon firing 4,000 rounds per minute (67 rounds per second), and four Fei Nu (“Flying Crossbow”) FN-6A short-range, heat-seeking missiles, with an effective range of 3.75 miles. This missile was first used in combat in 2013 during the Syrian Civil War and again in 2014 by ISIS terrorists in Iraq. 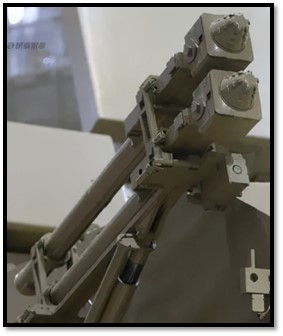 Meanwhile, the existing, seven-barrel, Type 730B, naval Gatling gun has been adapted for ground-based, air defense service on the Norinco LuDun LD-2000 Ground-Based Close-In Weapon System. This weapon was unveiled in 2005, mounted on an 8×8-wheeled WS2400 truck chassis. An updated version is also fitted with six Tian Yan (“Sky Swallow”) TY-90 short-range, imaging-infrared-guided missiles, with a maximum range of 3.75 miles. 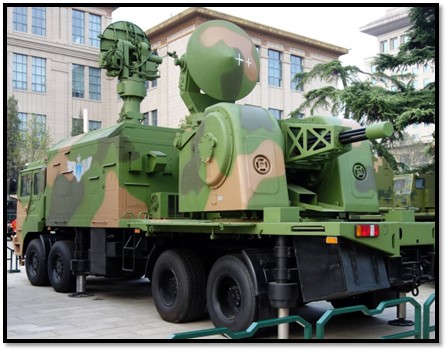 Since January 2021, China has also tested an amazing, 20-barrel Gatling gun for use as a naval, close-in weapon system (CIWS.) According to staff writer Joseph Trevithick at The Drive/The War Zone, “A CIWS with a 20-barrel, Gatling-type cannon with a very high rate of fire would…put out more rounds, faster…particularly valuable for engaging existing and future advanced, anti-ship missiles, which are increasingly faster and stealthier, features that could shrink the available engagement window for close-in defenses…(And) unless the magazine capacity is similarly increased, this weapon might only be capable of firing a small number of total bursts before needing to be reloaded.

“So, while it remains to be seen if this particular, 20-barrel design will make its way into operational service…(it) can spew out shells at even more blistering rates of fire as new threats continue to emerge…an independent expert on missiles…has noticed that the side-view picture of this new, Chinese CIWS firing appears to show two barrels, one at the 12-o’clock position and one at the six-o’clock position, firing at once. It is possible that ammunition could be fed in, and then ejected, at two separate points to support this method of operation, which would further increase the gun’s overall rate of fire.”

Thomas Newdick concluded for The Drive on September 27, 2021, that, “In fact, the continuing, Chinese focus on short-range air defense (SHORAD) systems that can detect, track, and engage smaller targets in all weather, is in stark contrast to the U.S. approach, where this class of weapon has been neglected since the end of the Cold War. This is of particular concern as the (worldwide) drone threat continues to proliferate.”

Warren Gray is a retired, U.S. Air Force intelligence officer with experience in joint special operations and counterterrorism. He served in Europe and the Middle East, earned Air Force and Navy parachutist wings, four college degrees, and was a distinguished graduate of the Air Force Intelligence Operations Specialist Course, and the USAF Combat Targeting School. He is currently a published author, historian, and hunter. You may visit his website at: warrengray54.vistaprintdigital.com.