“Over the past 33 years…I have never had to kill a bear in defense of life,

but this bear was different. We were in thick brush, and…(near) the bear

out of the brush 10 feet from me! I had the little S&W in my hands…

six or eight feet away, and I fired the first shot into the area between

the head and shoulder. It growled and started wildly thrashing around…

My next shot hit it in the shoulder, and it began twisting…I continued

firing as fast as I could see vitals. Five shots later, it turned into the

brush, and I hit it again and it twisted and fell 20 feet from us!…

your (Buffalo Bore) ammo WORKS. We recovered four of

On the weekend of August 13-14, 2022, Ken Mauldin of Steamboat Springs, Colorado, received the shock of his life. Just before dawn, his wife came face-to-face with a 400-pound, male, black bear inside the dining room of their split-level home, with their three children still asleep downstairs. Mauldin grabbed a self-defense handgun and opened fire on the bear from 10 feet away as it charged toward him. He emptied a full magazine into the creature. The bear “crashed through a banister…(and) slid down the stairs, mortally wounded… My only thought was protecting my family and putting that bear down,” Mauldin told the Associated Press. “Bears are very smart,” explained Rachel Gonzalez of Colorado Parks and Wildlife. “Once they learn that it’s easy to access food in a certain area, they are going to keep doing it.”

This is precisely the problem that exists in my semi-rural neighborhood in Maryland, directly adjacent to C&O Canal National Park and Harpers Ferry National Park. Some neighbors on our street have either deer corn feeders or bird feeders in their yards, and the Department of Natural Resources explains that these feeders also attract local black bears, especially on mornings designated for trash pickup. Until recently, bears have raided the feeders and cans mostly from 10 PM to 1 AM, but most recently, a mother bear and her cub were active on our street at 5:30 AM.

This directly affects me, because I walk four miles along our street, back and forth several times, for exercise between 4:30 AM and 6:30 AM. In the darkness, I only carried a flashlight, walking stick, pepper spray, and pocketknife, until now. I very recently received my Maryland concealed-carry permit, something previously impossible in this Democrat-controlled state. Fortunately, the U.S. Supreme Court decision this year overturned the totally unconstitutional gun laws of New York state, and Maryland by extension, since the Maryland laws were essentially the same as New York’s laws. Until July 5, 2022, Maryland was a highly restrictive, “may-issue” state, with only two-tenths of one percent of the overall population allowed to hold concealed-carry permits.

Thankfully, our Republican governor at the time, Larry Hogan, decreed on that date that, “Last month, the U.S. Supreme Court struck down a provision in New York pertaining to handgun permitting that is virtually indistinguishable from Maryland law…I am directing the Maryland State Police to immediately suspend (this provision.) It would be unconstitutional to continue enforcing this provision in state law.” As a direct result, I can finally and legally carry a concealed handgun in my own state.

Most shooting incidents involving self-defense against bears occur in the Western states, such as Montana, Wyoming, Idaho, Colorado, Washington, Oregon, and in the far northwest, in Alaska. A 2018 study by Ammoland.com of 37 such incidents involving self-defense with pistols against bears from 1987 to 2018 found that the human success rate was 97 percent. This included four cases with 9mm handguns, with a 100-percent success rate. The solitary, unsuccessful event of the overall study involved a .357 Magnum revolver in Alaska in 2010 when a geologist fired and merely grazed the animal, which then clawed and mauled his right arm for 10 to 15 seconds before withdrawing briefly. The man fired two more shots and missed, and the bear attacked him again, although he survived. The only recorded attack of this nature in the Eastern United States took place in Massachusetts on November 2014, with the bear killed by a headshot

This study noted that “Predatory, black bear attacks are the most common, fatal black bear attacks in North America. Only eight of the pistol defenses listed above are defenses against black bears, or 23 percent. It is reasonable to believe there should be about twice that number. Black bear, predatory attacks often give potential victims good opportunities to use a pistol effectively.”

I have owned a variety of self-defense handguns (at least 12) over the years. I have sold some of them and have given others to my sons, so my only remaining defensive pistol at the moment is a compact, Ruger LC9s Pro in 9x19mm, which I may now legally carry in my home state. The only remaining question for defense against bears is, “Which ammunition is the most effective?”

Let’s begin with the most popular and well-known load, the Buffalo Bore 9mm +P Outdoorsman 147-grain, hard-cast (92-percent lead, 6.2-percent antimony, and 1.8-percent tin), flat-nose round, at a tested, 1,021 feet per second velocity from my small Ruger. Buffalo Bore states, “We’ve designed this 9mm load, just for those people who own a 9mm pistol and wish to carry it in the woods for defense against black bears or even grizzlies. This ammunition will give them a fighting chance.

“We’ve utilized a flash-retarded powder in this load. There is no need to be blinded by your own gunfire at the very moment of need when protecting yourself or loved ones. This load is designed to penetrate deeply (four to six feet) in a straight line…designed to crush through a large bear skull, coming and going…(and) there is nothing wrong with using it for defense against humans in situations where over-penetration is not a liability.” 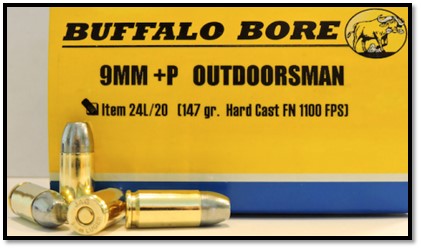 I purchased a box of this ammunition in 2018 which I carried on one short, uneventful vacation into bear country in rural West Virginia that same year. It has been used successfully against bears and wild boar and is truly effective. While I was totally confident in its abilities to stop a bear, the hard-cast, lead-alloy bullet technology is somewhat dated, and I was seeking a new and improved upgrade.

Then, in the late summer of 2022, I acquired a box of brand-new, G9 Defense 9mm +P Woodsman 124-grain, solid-copper ammunition as my latest bear-defense rounds. Not only is copper twice as hard as standard lead (or about the same as hard-cast) on the Mohs Scale, but because it’s 26.6-percent lighter than lead for any given volume (a 124-grain, copper bullet is the same overall size as a 157-grain, lead bullet), it will perform in a similar manner, except that it is actually lighter and about 10 to 12 percent faster. 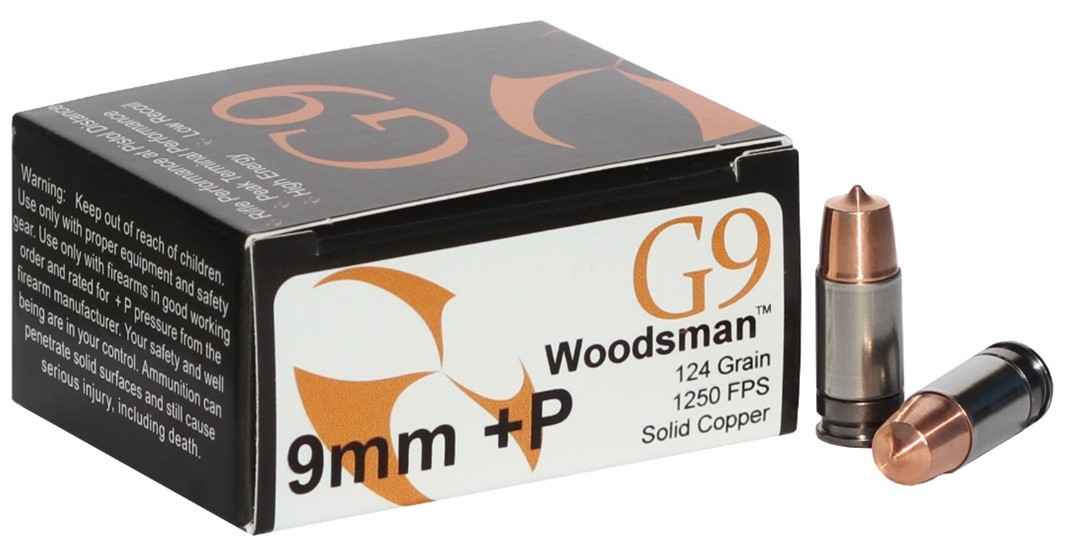 G9 Defense states, “When there is a need for protection against anything that can be found in the wilderness, the Woodsman answers the call. It provides deep, straight penetration with the power to overcome thick hides and heavy bones, making it an ideal handgun hunting choice…precision-machined from solid copper, and therefore displays fantastic accuracy and remarkable dependability in terminal performance. It not only penetrates deeply, but it also creates phenomenal cavitation. Third-party testing has proven the Woodsman design to be the largest, wound-cavity-producing munition in handgun calibers due to its unique and patented tip design…(creating) impressive depth of penetration (34 inches in ballistic gelatin for their 9mm round).”

Although the local black bears roaming through my neighborhood appear to be in the 200-pound to 400-pound category, wild bear populations in Maryland and nearby Pennsylvania typically produce adult males in the 650-pound to 700-pound category. At 5:30 in the morning, the bears clearly have the home-turf advantage here, with thick, black fur for concealment in the near-total darkness, a sense of smell more than 2,100 times better than humans have, seven times better than a bloodhound’s, and with very sharp, full-color, night vision. I’m sincerely hoping never to encounter one in the dark, much less have to shoot it, but if worse comes to worst, I need to be exceptionally well-prepared.

Accordingly, I’m hedging my bets by selecting an alternative bear-defense load, the Hornady 9mm +P 115-grain, MonoFlex Handgun Hunter solid-copper hollowpoint. While 115 grains sounds a bit light for shooting bears, remember that a 115-grain, copper bullet acts like a 146-grain lead bullet at 1,100 feet per second; and elastomer material inside the nose cavity delays expansion to allow for deeper penetration.

Hornady writes, “Hornady Handgun Hunter ammunition is built around a bullet as rough and rugged as the conditions and game demand…manufactured with a tough copper alloy that achieves deep penetration…Upon impact, the elastomer compresses, then pushes out and causes the bullet to expand…The tough, copper alloy in the MonoFlex bullet allows for deep penetration while retaining 95 percent of its weight for maximum impact.”

Hornady Handgun Hunter ammunition was reviewed by Eric Conn of American Hunter on October 28, 2019. Conn wrote, “When you’re looking for maximum penetration and devastating expansion from a bullet for use on heavy-bodied game, it’s hard to beat the performance of a monumental construction…Both shots (on my bear hunt) took place at short distances, but delivered exceptional expansion on clean pass throughs…(with) two gaping exit wounds…the Handgun Hunter load is easily tough enough to stop a bear or big-bodied elk, and would do serious damage on hogs or deer…For hunters looking for deep penetration and devastating expansion, it’s tough to beat the new Handgun Hunter load from Hornady.”

Trapr Swonson added for GunsAmerica on July 4, 2022, that, “Performance was everything I’d hoped for…while I’d like to post a picture of a nicely mushroomed, Monoflex bullet. I’m much happier knowing penetration was complete, the damage was textbook, and the animal (a 179-pound wild boar) died quickly and was found easily…Hornady has hit a home run with this ammunition.”

So, while the G9 Defense load is an absolutely superb penetrator, the Hornady Handgun Hunter round offers deep penetration, while still expanding and causing maximum, internal damage to a bear. When traveling in bear country, I’ll load my seven-round magazines with alternating cartridges of G9 Woodsman (four rounds) and Hornady Handgun Hunter (three rounds), with the philosophy that it’s better to have and not need the best-available ammo in a life-or-death situation, than to need it and not have it. I hope I never have to shoot a bear at point-blank range, but if it becomes an alarming necessity, I want every shot to count to the maximum extent possible. 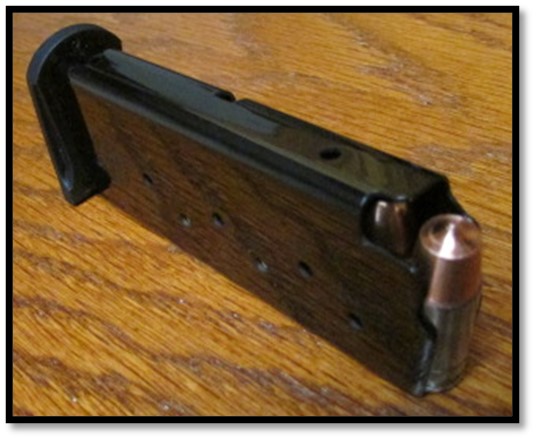 Warren Gray is a retired, U.S. Air Force intelligence officer with experience in joint special operations and counterterrorism and is an NRA member. He served in Europe and the Middle East, earned Air Force and Navy parachutist wings, four college degrees, and was a distinguished graduate of the Air Force Intelligence Operations Specialist Course, and the USAF Combat Targeting School. He is currently a published author, historian, and hunter. You may visit his website at: warrengray54.vistaprintdigital.com.