“The 9mm PPK-20 submachine gun, based on the Vityaz-SN,

differs from its predecessor by its compact size, lower weight,

use all types of 9x19mm rounds…(with) a simple

Since 2005, the Izhmash/Kalashnikov PP-19-01 Vityaz (“Knight”)-SN in 9x19mm has been the standard submachine gun of the Russian Federation, based upon the AK-74 rifle configuration, for familiarity by the troops. It was named for the 1st Special Purpose Unit of the Internal Forces “Vityaz,” a special forces and counterterrorist unit of the Interior Ministry, incorporated in September 2008 into the 604th Special Purpose Center “Vityaz” of the National Guard of Russia. It was adopted by the Interior Ministry in 2005. The Vityaz-SN has been a simple, reliable, straight-blowback weapon, with a 9.35-inch barrel and 30-round magazine, less than 19 inches long with the AKS-74-style, skeletonized stock folded. It fires from a closed bolt for accuracy.

But recent, combat experience, especially in Syria, has led to some complaints, criticism, and requests for an updated and improved firearm. Accordingly, Kalashnikov Concern, which has produced the PP-19 Vityaz-SN since 2008, developed the new Pistolet-Pulemyot Kalashnikova-20 (“Kalashnikov Submachine Gun-2020,” or PPK-20), with a 9.17-inch barrel and 30-round magazine, firing at a rate of 800 rpm, or 13.3 rounds per second, using standard 7N21 or 7N31 armor-piercing ammunition. It combines the reliability and ergonomics of the modern AK-12 assault rifle with a subcompact size and a Picatinny rail allows for mounting a variety of accessories. 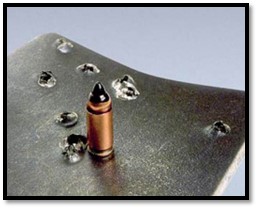 The PPK-20 also features the folding, telescopic, six-position-adjustable AK-EVO polymer buttstock from the AK-12 Gen. 2 model and AK-19; iron sights and is only 18.1 inches long with the stock folded. The slotted flash suppressor accepts a quick-attaching suppressor, which is standard equipment with the PPK-20.

Russian participation in the Syrian Civil War highlighted the need for Russian pilots to be well-armed with survival weapons in case of being shot down behind enemy lines. On February 3, 2018, the Russians suffered a major blow when one of their Su-25SM3 Frogfoot-A Mod. 3 ground-attack fighters was shot down over western Syria by the al-Qa’ida-linked Hayat Tahrir al-Sham (HTS) extremist rebel group. The pilot, Major Roman Filipov, ejected safely and parachuted to the ground but was rapidly surrounded by a dozen angry militants who opened fire upon his position.

Filipov valiantly defended himself with his Stechkin APS machine pistol (designed in 1951), killing two of the terrorists as he emptied a full, 20-round magazine at them, and he then reloaded. At that point, he was hit in the right side by enemy fire, and the HTS troops moved in closer with a video camera recording the entire incident. Filipov fired one final, half-second burst, and then dropped down behind a boulder, severely wounded, pulling the pin on an RGO hand grenade at the last possible moment to avoid capture and torture by the fanatical extremists. He loudly shouted “This is for our guys!” and then the grenade detonated with a puff of gray smoke, killing him instantly.

The Russian Defense Ministry noted that, “Major Roman Filipov fought an unequal battle with his service weapon until the last minute of his life. When surrounded by the terrorists and heavily wounded, the Russian officer blew himself up with a grenade when the militants got within several dozen meters of him. The pilot died heroically. We are proud of our heroes.” His exemplary courage under desperate circumstances merited a prestigious, Hero of the Russian Federation award, their highest honor.

Because of this and other incidents involving downed pilots in combat zones, the Russian Aerospace Forces requested a modern, compact, automatic weapon for self-defense by pilots on the ground. They were specifically interested in the new PPK-20 submachine gun but modified to fit inside the seat survival kits of Russian fighter aircraft and specifically tested for that purpose. This modified weapon, introduced in August 2021, is unofficially designated the PPK-20U.

Compared to the original PPK-20, the pilot survival version is approximately two inches shorter and 1.3 pounds lighter, with a 6.3-inch barrel (7.15 inches with flash suppressor attached), and an overall length of just 16.14 inches with the stock folded.

A very dramatic, YouTube video posted on Sunday, October 23, 2022, vividly depicts the swift and violent ejection sequence from a stricken Russian Su-25SM3 Frogfoot-A Mod. 3 ground-attack fighter (number “09 Red”) at ultra-low altitude on June 17, 2022. The jet was savagely torn apart in flames, and the excellent Zvezda K-36DM rocket-powered ejection seat saved the pilot’s life. He was wearing a GoPro-type video camera on his flight helmet, so the entire sequence was visible from his personal viewpoint. Russian sources claim that he clipped a power line near Belgorod, Russia, 14 miles from the Ukrainian border, while Ukrainian sources claim that he was shot down in combat.

The pilot landed by orange-and-white parachute in a broad, open field, not far from the burning wreckage of his own aircraft. There were no enemy troops visible in the footage, so the pilot did not require a weapon immediately. However, it was still a very intense incident, and certainly embarrassing for the Russian Aerospace Forces.

The Russian Aerospace Forces plan to issue the PPK-20U to fighter and bomber crews, while their helicopter crews will likely receive the new Kalashnikov AM-17 assault carbine in 5.45x39mm with 9.1-inch barrel to replace their existing AKS-74U self-defense weapons, as were used in Syria and now in Ukraine. A modified and more-compact version is expected to equip the seat survival kits of Russian Su-35S Flanker-E+ fighters and new Su-57 Felon fifth-generation stealth fighters at some point in the future. 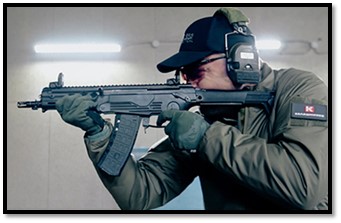 In addition, the Russians plan to issue the new Kalashnikov/Lebedev PLK compact service pistol in 9x19mm, with 3.62-inch barrel to their aircrews  . (See my Gunpowder Magazine article on “The New, Lebedev PLK Compact Pistol” from August 23, 2022.) The Kalashnikov PPK-20U will be available either as a seat kit, survival weapon, or attached to a survival vest on the pilot’s body. Due to its compactness and high firepower, the PPK-20U may also be highly desirable for special operations forces or as a personal-defense weapon (PDW) for combat vehicle crews and other selected units.

Warren Gray is a retired, U.S. Air Force intelligence officer with experience in joint special operations and counterterrorism, and is an NRA member. He served in Europe (including Eastern Europe) and the Middle East, earned Air Force and Navy parachutist wings, four college degrees, and was a distinguished graduate of the Air Force Intelligence Operations Specialist Course, and the USAF Combat Targeting School. He is currently a published author, historian, and hunter. You may visit his web site at: warrengray54.vistaprintdigital.com.